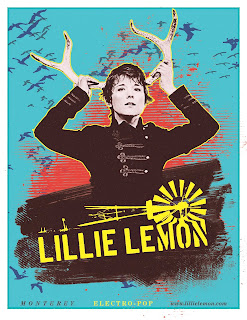 A creative and imaginative video for a really fine song and a pleasure to have first showing here on Beehive Candy.

So here's the low down on Monterey-based, alternative electro-pop duo, Lillie Lemon.

The group is comprised of Lillie Lemon (vocals/synthesiser) and Erica Wobbles (synthesiser/production).

Originally from Wisconsin, Lillie Lemon moved to California, where she then met Erica Wobbles. Though the pair began performing small open-mic shows together, it wasn’t until years later that the decision to collaborate came to fruition.

Their first album, entitled ​ /brāk/, ​was a turning point for the duo, shifting from Lillie Lemon’s acoustic style into a more electronic sound. According to Lillie Lemon,​ “Stardust” is about a relationship gone awry that tragically ends in a car accident.

This is a really fine electro-pop song. Lillie's voice just seems so right for this type of music, which is in my opinion, pretty good in it's own right. Hopefully this gets much wider attention, as I have said before if the Top 40's of today were full of songs of this calibre, just imagine how great radio would be again. There is more about Lillie Lemon on their website HERE.