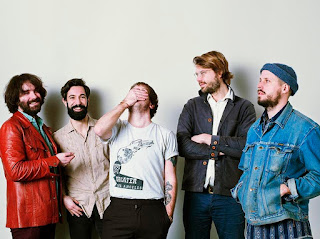 Background promo - For Treetop Flyers, the last few years have been a case of needing to fall apart, in order to rebuild, and come back stronger. Two and a half years on from their acclaimed debut album ‘The Mountain Moves’, fate showed its macabre sense of humour in dramatically shifting the ground beneath the London five-piece. The grief for lost parents, broken marriages, the near-death of a close friend, the departure of long-time bassist Matthew Starritt, the loss of numerous behind-the-scenes personnel (as well as an accountancy bill that they say “would make the government weep”) led to a prolonged period of upheaval and an unsettled and anxious camp. It was perhaps natural that Palomino was to become an honest, raw, and reflective record. As vocalist / guitarist Reid Morrison puts it; “We'd been through a lot individually and collectively. Coming together to make this record was very therapeutic for us, in a sense. It brought us closer and allowed us to let go of a lot of the bullshit that we'd had to endure and negotiate in the past.”

In 2015, after everything, instead of uncovering a lost and haphazard band, their caution-to-the-wind experimentalism sees a group dragging themselves to their feet once more. Sticking together extended far beyond just getting in a room and recording. Palomino is a wholly collaborative affair – no single songwriter is solely credited on any of the record - and you sense it had to be this way. Setting the tone for the album, opener 'You, Darling You' is a reflection on the old saying "sometimes loving someone means letting them go”. In this case it's over a failed marriage, but the record picks up on some of the themes of death and departure that made up The Mountain Moves. It’s a subject the band still find, understandably, difficult to shake, as Palomino flirts with many ideas of finality. 31 Years tracks a goodbye to a friend who passed away during the recording of their debut, and St Andrew’s Cross is a lament to the passing of Reid’s father, used almost in therapy by the band as a way to reconcile the past and the unknown ahead, all at once. Interestingly, it’s the band’s own smart production (as well as tracks like Dance Through The Night and Falling Back) that injects real life into Palomino. Hope permeates above all else, which is nothing less than they should allow themselves after everything they’ve been through. Treetop Flyers emerge triumphant from the most turbulent of times. New single 31 Years, out 26 Feb on Loose. Taken from the forthcoming new album Palomino, out 11 March on CD, double LP & download.

'31 Years' suggests a confident band knowing their business and craft inside out. With stand out vocals and a band who make playing seem effortless, this is a fine rock song, that has some excellent hooks and demands your attention. 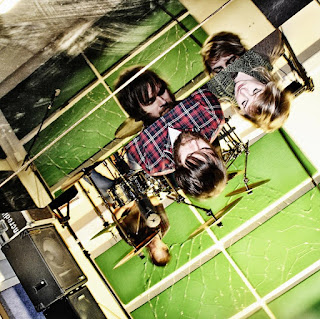 Background promo - Based in the South Wales Valleys, The Minerals are Colenso Jones and Jodie Gibson, a couple who began writing and performing together in the Summer of 2014.

Merging elements of Country, Electro and Psychedelia, the duo's influences range from The Vaselines and Leadbelly to Mogwai and Nick Drake. The Minerals strive to retain a raw quality to their recordings with an emphasis on creating a specific atmosphere for each track.

Both musicians were involved in punk bands throughout their teens and early twenties and although their music is no longer confined to that genre, the DIY ethos is evident in their approach to writing and recording. The lessons learned within the punk period of their musical development are still very much ingrained.

The Minerals' writing process involves the merging of individual ideas which are then worked on throughout the night and recorded by morning, by which point they normally have something in place they're both happy with. 'Ball of String' and B-side 'Lo-Fi' were among several tracks written in a barn in the South of France last winter, where the band were unexpectedly snowed in for a week. A plentiful supply of wine and cheese kept them going until the thaw. They returned home having written a complete album.

With some live dates announced and festival dates in planning, what better reason can we have, to share some of the excellent music from The Minerals, that they came up with last year. This duos music has plenty of diversity, edge and style. To see just how much that's the case, click (here) for some more.