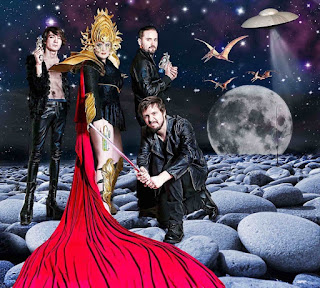 Since winning 2014's LA Battle for Vans Warped Tour at House of Blues Sunset, SpaceCream has taken Southern California by storm. Pterodactyl Sky results from two years of creative energy and live performances, including sold-out shows at legendary venues like the Viper Room and Troubadour.

A description of Glam, Prog and Glitter Rock all mixed up, just had to garner some interest on my part. The featured track gives a reasonable flavour of 'Pterodactyl Sky'. Powerful vocals compete with an equally powerful band as they dip in and out of styles in what is a very likable album. 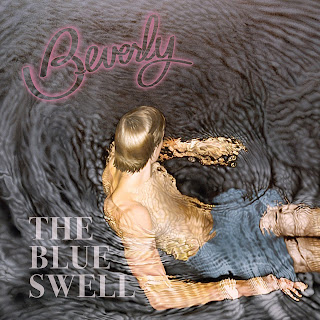 Promo words - Brooklyn-based Beverly releases their new single "Victoria" and announces the release of their forthcoming sophomore record The Blue Swell due out May 6th on Kanine Records, album art above.

"Victoria" was conceived during a snowy weekend upstate where front woman Drew Citron and guitarist Scott Rosenthal had settled to get in some uninterrupted songwriting. Their friend Kip Berman (Pains of Being Pure At Heart) drove up to pay the pair a visit. Berman had written a few guitar parts inspired by Beverly and played them the demos; Citron and Rosenthal fell in love with the guitar work that eventually turned into "Victoria", a collaboration made in pop fan heaven.

"Victoria" is the second cut from The Blue Swell following lead single "Crooked Cop" which the band shared in late fall of 2015.

Since the summer of 2014 and the release of Careers, which Stereogum dubbed an "exceptional shoegaze-pop debut album," the main driving force behind Beverly has been Drew Citron. While Beverly began as a recording project between two friends, The Blue Swell out May 6th, 2016 on Kanine Records represents a fresh start for the band.

On The Blue Swell, Citron's main collaborator is longtime tour mate and noise pop producer Scott Rosenthal (The Beets, Crystal Stilts), with Kip Berman (The Pains of Being Pure at Heart) lending co-writing talents to Victoria.  Careers is acclaimed for its "fuzzed distortion and melodic sugar" (Rolling Stone) and its variety, with Pitchfork noting how it “careens from venomous, angry punk to jangly, mild lust to blown-out emotional hangover.” While you'll still find reverb, catchy hooks and a track or two like Bulldozer or South Collins that could perhaps fit into the debut, the new album takes a less aggressive and more melodic turn.

Plenty of plaudits for Beverly from within the music press/blogs. 'Victoria' has a full on indie rock vibe, with vocals subtly placed in the mix giving a gentle tilt towards shoegaze. Whatever, it's a catchy, 'good feeling' song and should (deservedly) raise interest in the forthcoming album.