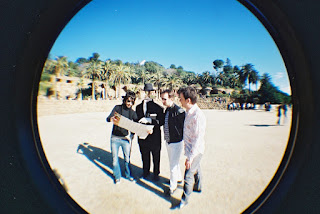 Extensive promo words - Cult London Psychedelic band The Chemistry Set have quite a history. Founded by Dave Mclean and Paul Lake in 1987, the band are veterans of the alternative Manchester label “Imaginary” and cassette only label “Acid Tapes”; they helped pioneer the late 1980’s neo-psychedelic boom.

The Chemistry Set counted Factory Records boss Tony Wilson amongst their fans (they appeared on his TV show). They also received regular airplay on the legendary John Peel’s show (Peel even went so far as to sending the band a hand-written fan letter!).  The Chemistry Set have been championed by mainstream media such as The Times Sunday, Record Collector, XFM, 6 Music and Classic Rock as well as underground fanzines like Bucketful of Brains and Freakbeat in the UK, The Bob in the USA, Ruta 66 in Spain and Sound Effects in Sweden).

Their numerous releases (The Chemistry Set’s discography currently stands at 42 releases!) both in the UK and abroad were accompanied by extensive tours throughout the UK, Europe and the United States.. As well as reaching the indie top 20 in the UK, the band’s single “Don’t Turn Away” made the national Top 20 in Spain.

The band split in the early 90’s, took a bit of a hiatus, remaining silent… until The Chemistry Set “MACH II” remarkably reappeared in 2008! The return came about when their unreleased LP from 1989 “Sounds Like Painting” somehow was uploaded onto numerous blogs and was downloaded over 5,000 times. Since the return in 2008, the second stage of the group has seen the birth of 3 CDs: “Alchemy # 101”, “This Day Will Never Happen Again and “Chemistry is Just Numbers” plus 5 vinyl singles and 5 compilation appearances. Their first new release “Alchemy#101” in 2009 was heralded with radio play on BBC Radio 6 and XFM plus rave reviews.

It was a track on “Alchemy#101” that caught the interest of Cult Arranger/songwriter [and former Electric Prunes member] David Axelrod. The band made contact with his son and sent the CD to David. He loved how they added a symphonic section of his song “Sanctus” from The Electric Prunes’ masterwork “Mass in F Minor” into their reworking of Del Shannon’s “Silver Birch”. Originally found on Shannon’s “The Further Adventures of Charles Westover”, his cult 1968 LP. David said of their cover “Real Music! Finally music that makes you think and really listen to!”

The Chemistry Set have always liked giving things a “twist” , and have inserted a cover  version inside a cover version on other occasions, such as their version of Pink Floyd’s  “See Emily Play”. It had the “Bicycle Rider” section of The Beach Boys from the unfinished “Smile” album inserted within the song. Their cover was included in the 2013 Pink Floyd tribute box-set "The Many Faces Of Pink Floyd" and was cited as one of the best covers in the package.

In 2011 the band signed to French label Dead Bees records, which were the first European label to release The Brian Jonestown Massacre and The Black Angels. In 2012 Dead Bees released their second album “This Day Will Never Happen Again” it received substantial critical acclaim and radio play in the USA, France, Spain and the UK.  The English newspaper The Sunday Times saying "The Psychedelic scientists exquisite English Toytown Acid-Pop songs achieve rare combinations of muscle and melody”.

The band were still up to their old tricks of putting a cover within a cover on the recently released Fruits de Mer records Box-Set of seven 7” vinyl singles entitled “7&7 is”. They cover “A House Is Not a Motel” & “Live And Let Live” by Love from “Forever Changes” and on “Live And Let Live” they have inserted some more Electric Prunes (this time an excerpt from “Get Me To The World On Time”) into Arthurly’s autobiographical confession.

The band released the “Elapsed Memories” EP in February 2015 to rave reviews and airplay. It included an unusual  cover of Jimi Hendrix’s “Love or Confusion” given a twist with 12 string acoustics, sitars, tablas and a mellotron. The New York Music Daily said of their version “The Chemistry Set re-invent Hendrix’s classic as an Indian Jam”

The band returned to the studio in the spring of 2015 to record their new album “The Endless More & More”. The album will feature 12 original songs plus a bonus 12”featuring their cover of Hendrix’s “Love or Confusion” and 2 remixes.

The opening song from the forthcoming new album 'The Endless More & More' due this month 'The Splendour Of The Universe' is er.. well splendid. Loads of words above and believe me, they have been edited down, however it makes for an interesting 'potted' history of the band and a good introduction for those not familiar. in the meantime have a listen and find out for yourself, what an exciting album (based on the calibre of this song), is heading our way.