Down Under Double: Self Talk - Mellie 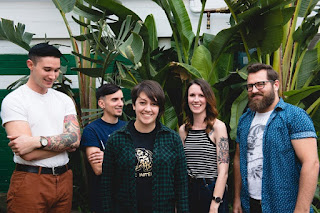 Background promo - Freshly forged by members of Melbourne's finest including Ceres and Skyways are Highways, buzzy rockers Self Talk are set to drop their brand new single 'Hypocrite'; a bonafide pop-punk anthem.

Having spent 2015 writing and evolving their own unique sound, the band released their first two singles to fantastic critique, as well as developing their live-legs supporting punk legends such as Luca Brasi, Ceres and Endless Heights. Grabbing 2016 by the horns, ST took to the studio with acclaimed producer Aaron Dobos (British India, Slow Turismo) to track their debut EP 'Seeing What I Want to See' a bright and punchy yet vulnerable and sensitive record.

The first taste of this comes in 'Hypocrite', catchy as hell and buzzing with energy, the song also has a darker edge woven in via the lyrics. Inspired by the internal struggle experienced at the end of a difficult relationship, lead singer Stacey reflects upon being blinded by emotion until hindsight helps the truth become clear down the track.

'Hypocrite' mixes indie pop with a touch of punk, in an energetic and very catchy way. Vocally the song reminded me a little of The Bangles, only with a little more edge, no problem with that, it's a good song and good songs are always welcome. 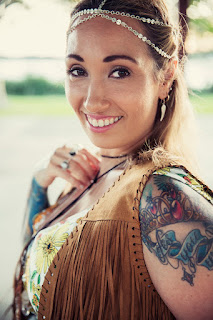 Mellie - Reach Out For You.

Background promo - Announcing the release of the debut single “Reach Out for You” from Aussie singer/songwriter Mellie on April 8th 2016. Written by Mellie and produced by Matt Fell, of Love Hz studios, “Reach Out for You” is an uplifting pop song with a clear message about asking for help in a time of crisis.

After spending many years healing from severe clinical depression, Mellie wanted to give back to the organisatoon who helped her in her time of crisis. Fifty percent of profits from her debut single are going to the charity organisation Lifeline Hunter Central Coast.

“Reach Out for You” incorporates powerful lyrics with a catchy melody. It has the sweetness of Kylie Minogue and the epic power of Tina Arena and Delta Goodrem. “Reach Out for You” is written about a darker subject matter but it’s written in an accessible, melodic way so every listener can feel inspired by the song. The music video has been produced with the help of indie film makers Harlow Films and dance choreographer Jenna Drelincourt. The music video involved a cast of around 15 actors and dancers to help portray the feelings of mental illness and the impact it has on one's life.

"The theme of the song is reflected in the music video. We used darkness to portray the battle of mental illness and light to portray the journey back to vitality. The song really is about finding light in the darkness—knowing you're not alone in depression and reaching out to be heard in your time of crisis", explains Mellie. “‘Reach Out for You’ is my message that is letting people know you can survive mental illness and there are people and organisations such as Lifeline who are there to help you through.”

Mellie is performing at many Lifeline Hunter Central Coast events throughout 2016 to help raise awareness of mental health. “Reach Out For You” by Mellie will be released 8th of April 2016.

Having read the above promo I was expecting something quite different regarding the song 'Reach Out For You'. Put simply what I hear is a really sincere pop song. Full of charm, melody, and a mass of hooks, all of which underscore Mellie's superb vocal range. 2016 is throwing up some really good down to earth pop songs, of which this is definately one.