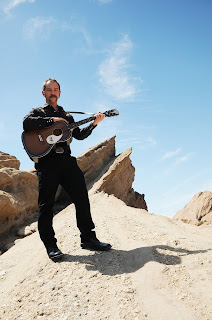 Background bio - The Satin Cowboy is Emmy winning film and television composer Silas Hite. Silas has music in his DNA. He began his career co-scoring blockbuster and independent films such as Nick & Norah’s Infinite Playlist and Cloudy With a Chance of Meatballs with his uncle, noted composer Mark Mothersbaugh of Devo.  Now Silas’s music plays in television shows around the world, from kids shows like Shaggy & Scooby-Doo Get A Clue! and Disney’s Dance-A-Lot Robot, to adult shows such as Blue Mountain State, Eureka, Duck Dynasty, and Chef's Table.  He has scored hundreds of commercials earning him an Emmy, a Cannes Gold Lion, a Grand Effie and Adweek's Campaign of the Decade.  He’s contributed memorable music to some of the top selling video games such as The Sims 4, Skate 3, and The Simpsons. His music has played in such venerable institutions as the San Francisco Museum of Modern Art, the Los Angeles Museum of Contemporary Art, the New York Museum of Modern Art, and The Whitney Museum.

Silas was raised in the remote mountain town of Crown King, Arizona.  He attended a one room school with a handful of other children and was able to run free in woods after school.  He grew up listening to the rock and roll and old country music wafting through the air from the local 100 year old swinging door saloon.  His father, also a musician, was often in the bands playing the music.  This is the environment that informed the Satin Cowboy. "Duel" is a celebration of the golden intersection of rock n' roll & roots country.

Silas Hite really does take us on a musical journey with his album 'Duel'. The featured song 'Fool Paradise' has been described as Californian Americana, an apt and highly descriptive expression that really does sum up this wonderful song. There's southern rock, through to more gentle indie folk type music on the album, the one constant is the quality, these are all classy songs. 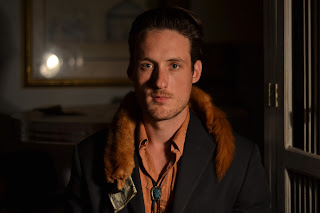 Ben de la Cour - Down to the Water's Edge.

Background promo - The fine line between love and obsession is carefully toed by rising singer/songwriter Ben de la Cour on his haunting new single “Down to the Water’s Edge.” Credited by Red Line Roots with offering “subtle hints of Johnny Cash, Townes Van Zandt, and Leonard Cohen,” de la Cour’s hauntingly dark and sometimes humorous style is rapidly making the well-travelled singer the face of the increasingly popular Americanoir sound. Described by de la Cour as a “creepshow manifesto” in which the narrator obsesses over his unknowing victim, “Down to the Water’s Edge” is the first single from de la Cour’s forthcoming Midnight in Havana album. Midnight in Havana will be released via Nashville’s Flour Sack Cape Records, a label that “aims to document the constantly evolving sound of one city.”

De la Cour has lived a different kind of life. After growing up in Brooklyn, he set out to see the world as an amateur boxer, bartender, and agricultural worker. He lived in Havana, Paris, London, Los Angeles, and New Orleans before finally settling in Nashville. It was at Nashville’s Greenland Sound that de la Cour recorded the eleven songs of perfectly crafted Americanoir that make up Midnight in Havana.

De la Cour’s extensive travels have taken him to some strange and sometimes dark and desperate places, places he documents so eloquently on Midnight in Havana. Tales of substance abuse, murder, and mental illness sit in perfect juxtaposition with playful lightheartedness and an ever-present glimmer of hope. However, upon closer inspection, darkness almost always wins. An unlikely hero, but one that suits de la Cour.

'Down to the Water's Edge' showcases Ben's vocals beautifully. It also gives his song writing skills a pretty good showing off. I'm still trying to figure out, quite what the 'Americanoir sound' really is, however if this is an example I'm definitely up for more. New album lands in May. 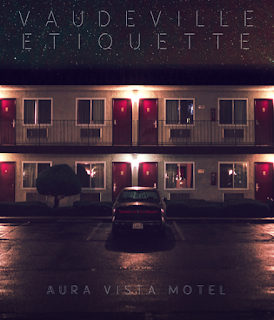 Background promo - When we last saw Vaudeville Etiquette, the Seattle band was touring in support of critically acclaimed debut album Debutantes & Dealers, an album that No Depression said was “in the same vein as Mumford & Sons and the Lumineers. Their seamless harmonies and sense of spontaneity makes them a good candidate for mainstream success.” The Seattle Times called the band “one of the bright new faces of Seattle music,” American Songwriter gave the album 3 stars and compared lead vocalist Tayler Lynn to Neko Case,” USA Today praised their ability to “mix folk, jazz and country with free wheeling abandon.”

The new album gets its name from the motel that once occupied an infamous stretch of Highway 99 in Seattle. In its heyday, here was a motorist’s utopia, filled with a thriving middle class that was ready to explore America, traversed by the likes of Kerouac and Salinger, and full of romantic intrigue and possibility. Today, it’s a forgotten relic, a notoriously seedy stretch of road that attracts violence, drugs, prostitution, and one 5-piece folk-rock band that relentlessly believes in its spirit and potential.

What used to be the Aura Vista Motel is now where the band writes, rehearses, celebrates, argues, hones their music, and shoot their videos. It’s the Vaudeville Etiquette headquarters, it’s haunted, and it’s the catalyst behind all that they do. You can hear it on this record, as each song plays like a guest in a different room; separate but united by our wayfaring desires and sordid expectations. They recorded the album with producer Shawn Simmons Studio Litho in Seattle, WA. “His knack for honing an intrinsic Seattle sound in the work he’s done with bands like The Head and The Heart and Lemolo was exactly what this record needed,” says Lynn. “He pushed us to create unique arrangements and employ unconventional recording and burrito-eating techniques that take the sounds on this album and gracefully elevate them to a psychedelic whirlwind, then down to an intimate lullaby and back around again. He’s a joy to work with and a hero at the helm.” Play Aura Vista Motel on late nights, behind the wheel of your car, volume up, windows down, and drive somewhere dark that makes you feel like you’ve got the whole world ahead of you.

'Tipping Point' is another new track from their upcoming album, Aura Vista Motel, having already received positive feedback for a couple of other preview songs. There are eleven tracks on the new album due out on May 6th and each one is a solid engaging song. The band have a refined natural sound and the production on the new album is exceptional. If you like 'Tipping Point' I think you should seriously consider an album purchase next month!