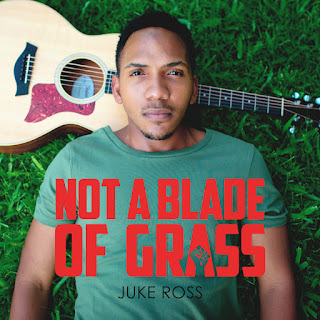 Juke Ross - Not A Blade Of Grass.

Background - For over 100 years Venezuela has tried to claim that a vast swathe of Guyana, an area west of the Essequibo River that is home to indigenous villages and mining camps, abundant with deposits of gold, diamonds, bauxite and other minerals, belongs within its borders. Last year tensions escalated once again after Exxon Mobil, conducting work on behalf of the Guyanese government, discovered oil off the shores of the disputed land; Venezuela tried to stake a claim to the oil.

During another border dispute flare up in the 1970s one of Guyana's favourite musical sons - Dave Martins, was inspired by a Native American Chief's speech refusing to bow to the white man's invasion of their land and wrote a resistance song for his countrymen. It instantly connected with his people and became part of Guyanese folklore.

"The Chief spoke about his people’s love for their land," recalls Dave Martins, leader of the legendary Tradewinds. "That they would not give up one river, not one buffalo, not one valley, not even one blade of grass. In a flash, it hit me; that was the way to write the border song – it should talk about Guyanese love for Guyana and not mention Venezuela at all."

The lyrics are simply incredible. Beautifully crafted, defiant and relevant today to Guyana and just about anyone else who ain't into backing down. Guyana has also produced another musical son - Juke Ross, who possesses a voice that God took special time to pour out when he was depositing the gold, diamond and oil in the depths of Guyana. The universe will undoubtedly be hearing a lot more from Juke Ross in the future, but until such time he has, with Dave Martins' blessing, recorded a cover of Not A Blade Of Grass. The 2016 iteration sees Serani commanding the production and is being released in time for Guyana's 50th Independence Anniversary.

This is such a beautiful song, whether you know of the history behind it or not. Juke has an infectious voice, and the delicate harmonies and finely structured music that sit behind his vocals are a delight.

Background promo - Blue Canoe Records has released “Marbles From A Drawer”, from versatile keyboard player David Ellington. “Marbles From A Drawer”,produced by Coy Bowles of Zac Brown Band, features many acclaimed guests and focuses on smoky, keyboard-based blues that is contemporary while still maintaining an old school presence. David Ellington grew up in Connecticut learning in as many musical situations as possible. From garage bands to church and school bands, he viewed all of these musical experiences as  ways to learn. After high school, Mr. Ellington continued his education in Boston at Berklee College of Music.

He moved to New Orleans,Louisiana in 1983 where he played and recorded with many local legends including Walter “Wolfman” Washington and Troi Bechet among others. Mr. Ellington also created afro cuban jazz group Chevere during his time in New Orleans. Cheer recording “Baila Mi Ritmo”was chosen by Times Picayune music critic Keith Spera as one of the Top 20 recordings of 2001. During this time, he continued learning as he studied under Ellis Marsalis.“Marbles From A Drawer” begins in sultry fashion with “Goin’ To Church”. Mr. Ellington captures the listener’s ear with an expanding groove that gets deeper and funkier as the track breathes. It fills senses while remaining simple at heart. As the keyboard foundation gives way to a sizzling guitar solo, the interplay between players gets bigger while maintaining its simplicity and catchy feel. At the end, the audience is left wanting more while their feet are still tapping.

On “98 Bottles”, Mr. Ellington features Clay Cook on vocals. Mr. Cook is famous for co writing hits with John Mayer including “No Such Thing” which won the 2003 ASCAP award for Most Performed Song. “98 Bottles” is a melancholy song about waiting remorsefully for a lost love. The haunting keyboard textures add to the wistful regret as the vocals build and fade. Ellington and Cook combine to move the listener as the track ends in a dream-like fade.

Not the whole song sadly but a flavour of what are eight fine songs on the recent album 'Marbles From A Drawer'. Worth a mention at the very least, and a style of music popular with a good number of our regular visitors.