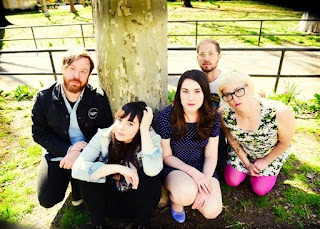 Background promo - Field Mouse share new single The Mirror. If 2014's Hold Still Life was the fruition of Field Mouse's evolution from a fiery two-piece into a fully-fledged band, then new album Episodic (August 5, Topshelf Records) is the letting go; the abandonment of past persuasions for something altogether more untamed. Where the band's initial work was self-recorded by founding members Rachel Browne and Andrew Futral, the new record signifies the first time that the quintet has composed an album together from start-to-finish - and the result is a record that feels altogether more defined.

Recorded in Philadelphia with Hop Along's Joe Reinhart, and written through a twelve-month period which delivered sudden family illness and a deteriorating relationship, Episodic is fashioned from ten feverish bouts of guitar-pop; led by Browne's fearsome and fearless vocal and informed by an instrumental backing that underpins the entire record with a vibrant concoction of guitar, drums and keys.

Showcasing the band's ability to switch between mood and tone, the record shifts from the spiky immediacy of tracks such as Accessory and A Widow With A Terrible Secret, to the more spacious moments, such as monumental centre-piece Beacon, without ever losing sight of the scuzzy, melodic pop songs that remain Field Mouse's distinct forte.

'The Mirror' offers up a glimpse of the bands forthcoming album 'Episodic'. Rachel Browne's lighter vocals juxtapose the fiery punk flavoured music. It's a two and a half minute blast of no nonsense music and it works. 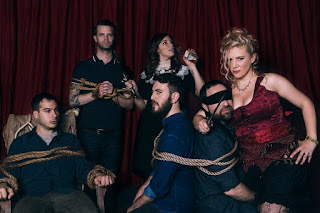 Background promo - Hailing from Brooklyn, Typhoid Rosie, offers up a unique blend of sultry Indie-Pop-Rock for your ears. With their newest release in tow, Hearts Bleed Goodbye, the band has been garnering the praise of fans and critics alike. Currently the band is sharing their new single "Run Along," a vibrant and catchy piece that brings their sound to life.

Hearts Bleed Goodbye features 11-powerful tracks which are inspired by love and love lost. The record pays a heartfelt tribute to front-woman Rosie Rebel’s late Mother, who passed away suddenly when she had an aneurysm while driving a car leaving her Grandmother’s wake. Before even having the chance to take off her mourning clothes or bury her Grandmother, Rebel would also unexpectedly and tragically have to say goodbye to the woman she loved most.

Throughout the record Rebel expresses this paralysing loss in her music while also touching upon unrelated themes such as addiction, stalkers, losing yourself in bad company, and the apocalypse.

Typhoid Rosie is led by Rosie Rebel, also known for her pre-Typhoid Rosie work as a long-time comedian which has been talked about on The Tonight Show with Jay Leno. In the midst of her rise in comedy, Rebel unintentionally discovered her knack for writing music while attending a music class at Columbia University. She later paired up with husband and drummer, Phil Wartell, to begin writing and producing; bringing Typhoid Rosie to life. After suffering the tragic loss of her mother, Rebel started to open her songs up to the world using music as a way to express her deepest emotions.

The album 'Hearts Bleed Goodbye' is a consistently good collection of indie pop and indie rock songs, with the latest single 'Run Along' typifying the more rock orientated side of the band. I have to say there is not one 'filler' song in the collection, indeed the album is a real treat for indie fans. 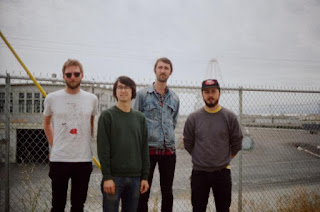 Background promo - Cool Ghouls is a rock'n'roll band. A band for playing rock'n'roll - that electric American folk art - without pretense. Think of rock'n'roll less as a genre and more as an action. A ritual performed with electric guitars and a drum kit to conjure a certain youthful spirit.

Inevitably, when listening to Cool Ghouls, you may recall performers of the past, other summoners of this same spirit, whose fingers were also channels through which rock'n'roll was made physical. But this band's purpose is not to reference, fetishize, or even celebrate these incarnations of rock'n'roll that came before them. Their intention is to animate their medium - bring to life the inanimate framework that is rock'n'roll. Get the kids dancing. Get the floor at the house party to cave in. Not to sound like a rock'n'roll band, but to do what a rock'n'roll band does. A band for playing rock'n'roll.

It's something the Ghouls know they have not yet entirely mastered. (How many of the numerous outfits playing these days have?) While they've certainly managed to convince audiences aplenty at home in San Francisco, along the West Coast, even abroad of their prowess, they are ever honing their blade. Refining an approach, learning to listen more keenly, seeing beyond bullsht, really getting at the essence of not only rock'n'roll, but of that which exists between four unique players - it's a task to keep a body busy for a lifetime. A kind of four-way collective self actualization.

'Sundial' really does have that classic rock'n'roll feel to it, that initially reminded me of late 1960's west coast bands. It's a really good listen regardless of era's, the vocals drive the melody, whilst the bands harmonies and fine playing, give the song that little something, that makes a song really stand out.