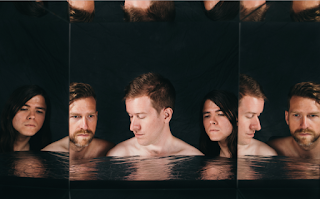 Background promo - Diamond Mind have announced their debut full-length album Heavy Metal Sunshine and shared the first track "Horseless Coach". Heavy Metal Sunshine is due October 7 on Wyatt Records. Formed in the summer of 2013, Diamond Mind is one of Edmonton, Alberta's favourite musical exports. Always looking to draw from many diverse wells - pop, noise, soul, all with an eye to the baroque - the band has already mapped extensive territory, leaping forward with the release of each of their three EPs. With these releases the band has won audiences through the unique character of their songs, recorded in environments ranging from attic bedrooms to storied, established studios.

The songs themselves echo this varied topography, ranging in content from intimate, confidential entries, elaborate pseudo-histories and haunting character sketches. Tracing the line back-and-forth between the accessible and the challenging, the music of Diamond Mind carved out an audience among both critics and fans, registering praise not only across Canada but from the international music community. In 2016, Diamond Mind partnered with Wyatt Records for the release of their debut album Heavy Metal Sunshine.

Melodic vocals and a fascinating range of sounds within the music makes 'Horseless Coach' stand out. It's a pop song, that is given a vital edge by the bands mass of imagination. 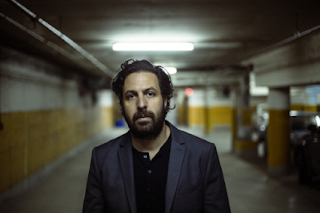 Background - Montreal singer, songwriter and multi-instrumentalist, Patrick Krief, has announced details of his highly anticipated fourth solo studio album, ‘automanic’ which will be released on September 30th via Culvert Music- available for pre-order now. He’s also celebrating the premiere of the latest single from the album, “Deo Gratias” which he shared on The Huffington Post this past week.  Krief is set to embark on an extensive Canadian tour in support of ‘automanic’ this fall.

‘automanic’ is a double album comprised of ‘automanic red’ and ‘automanic blue’, which Krief describes as "autonomous in their flow, yet not meant to be listened to in one sitting." Krief’s deep content is a result of a string of deaths he experienced, blended with heartbreak, grief and despair. Creativity healed adversity and inspired Krief to write poetic lyrics, both earnest and abstract, paired against sounds of contemporary pop and rock, atop dreamy soundscapes and rock ballads alike.

Known for his role as cowriter and guitarist in Montreal’s orchestral rock-noir band The Dears, Krief spent a decade with the band crafting a unique style. ‘automanic’ highlights the contrast of sounds in his solo endeavour.

'Deo Gratias' builds gently into a quite powerful song and is most definitely, an enticing taste of what you will hear on the double album to come. With twenty songs in total, it's hard to know where to start. Put simply the variety is staggering, as is the consistent quality across both albums. The statement above that the material is not meant to be listened to in one sitting, is actually quite reasonable. There is a richness across the material that deserves to be broken down, so as to take in the whole and enjoy each track. In summary this is a powerful work, musical art in all it's glory. 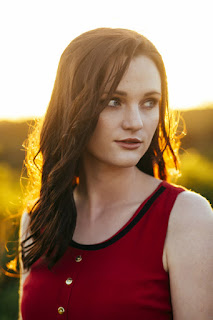 Background - After the unmeasured success of her 2015 debut EP When The World Ends, Ayla returns today with a new offering in 'Like the Other Kids' and a subsequent launch tour.

Premiered last night on triple j's Goodnights, the song's chugging, layered production is anchored by a pounding drum motif that takes it from stunning to anthemic, a catalyst for misty eyes and gentle steps forward despite its "dark imagery". Then there's that voice. The smooth, effortless gliding heights. The insouciant depths. Given a delicate yet self-determined vehicle through the considered nature of Ayla's songwriting prowess, 'Like the Other Kids' represents the dawning of a new age. You'd never guess it was conceived of while Ayla was washing dishes at her parents' house, testing out her rap flow.

Aylas reputation, built to its towering esteem via consistent support from triple j, a deal with Italy's Ego Records (Emma Louise, The Jezabels) and an awestruck slew of online outlets, has reached unshakable heights. Her single 'Wish I Was' claims the accolade of being the #15 most played song on triple j in the year of its release, and snagged international remixes from Spada and Zwette. Ayla has toured her own show across the country and supported heavyweights such as Kate Miller-Heidke (national tour), Husky and Asta. At Woodford Folk Festival, The Big Pineapple Festival, Bigsound 2015 and soon Caloundra Music Festival, her irresistible live show has stood out as a glittering jewel amongst the fray.

Ayla is not up-and-coming anymore, she's here. And with a headline 'Like the Other Kids' single launch tour and new EP on its way, she's only getting started.

'Like the Other Kids' is easy on the ear, and yet there is a lot packed into the song. It's melodic and Ayla provides really good vocals, in what is an imaginative song that flows oh so beautifully. 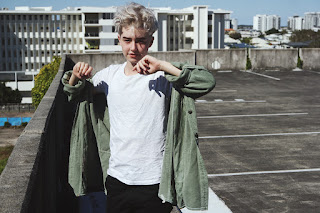 Background - Taylor Payne, a prolific song writer from the Sunshine Coast releases her second single after teaming up with The A&R Department. ‘The Jungle Talks’ is pure allure, reeling in the listener with its moody introduction, then diving into the verse with buzzing Pop synths and syncopated drums. It’s a supremely crafted song that builds anticipation right until the very end. Taylor's voice commands a distinct authority, as she brings her story of the jungle to life, taking inspirational cues from The Cure, and Eurythmics.

‘The Jungle Talks’ was recorded at Heliport Studios, Buderim, mixed by Elliot Hendrich and mastered by Mike Marsh. Taylor calls the unique style of ‘The Jungle Talks’ “dark-pop”, and it’s been described as having an 80's pop vibe, riding on a bold synth sound throughout the song, but her voice’s deep register brings a dusky atmosphere to the track. She conveys the song’s sense of adventure with lyrics like, "No need to hide if you know how to run,” before sinking into a deep reverie.

Taylor released her first single ‘Outsider’ in 2015 along with a colourful music video, getting national airplay across Australia as well the US. Her track reached listeners around the globe from it’s feature on Spotify’s The Indie Mixtape playlist. Her latest, ‘The Jungle Talks’ will be released with a music video to exemplify the song’s character. As always, you can expect something slightly askew, yet fun and eccentric. “The Jungle Talks” by Taylor Payne will be released 9th of September 2016.

The first notable thing with 'The Jungle Talks' is Taylor's attention grabbing vocals, and pretty soon after, the fact that this is a really good song. Layered synth sounds and a commanding rhythm work so well with the melodic and pleasing vocals. 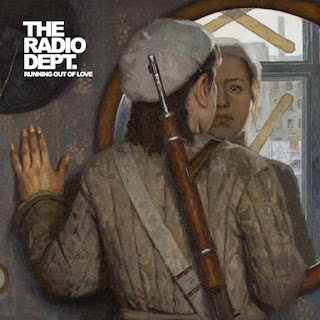 Background - Running Out Of Love is an album about life in Sweden in 2016 moving in the wrong direction:  politically, intellectually, morally. It's about the impatience that turns into anger, hate and ultimately withdrawal and apathy when love for the world and our existence begins to falter.

The issues addressed throughout the band’s stunning fourth LP - out 10/21 via Labrador - are relevant not just to Sweden but around the globe. New single “Swedish Guns” is a haunting take down of the Swedish arms industry.

The Radio Dept’s new album Running Out Of Love will be released on October 21st via Sweden’s Labrador Records. It's their first album since the critically acclaimed success of 2010’s Clinging To A Scheme. Pre-order the album and receive Swedish Guns as an instant track download.

This is one potent piece of electronic music. 'Swedish Guns' is music with a relevant and meaningful message. The musical soundtrack is very imaginative, complimenting and carrying the vocals superbly. 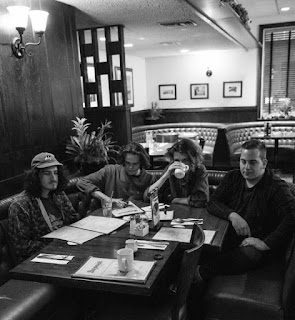 Background - Romantic is the forthcoming release from Los Angeles based post-pop band Slow Hollows. Written over the span of a few months between 2015 to 2016, Romantic is meant to serve as a response to the previous record Atelophobia. Austin Feinstein, the creative influence behind the project, wrote the songs from the album during his senior year of high school.

The project was original started by Feinstein in 2014 and was previously called Hollows. Their first record, I'm Just As Bad As You Are, was recorded in a minimal space and lead Hollows to receive some success playing along side such as Beach Fossils, Nothing, Twin Peaks, Spencer Moody, Antwon and more. In 2014 the name eventually changed to Slow Hollows after a shift in members and style. The current lineup is Austin Feinstein (vocals/lead guitar), Dylan Thinnes (guitar), Aaron Jassenoff (bass), Reed Kanter (synth/keys), and Jackson Katz (drums).

As time progressed, Slow Hollows grew into the post pop five piece from influences of the likes of Pavement and Radiohead as underlying tones of melancholy and indie rock are complemented by horns and various lush instrumentation. Band members were able to mold a sound that echoed truth of fears, self-doubt, and loneliness that speaks universal lengths to their audiences.

The album captures the sadness behind love, being an artist, and is ironically guilty of expressing the hardships and dejection that artists and people face day in and day out. Stating that the band members of this talented group have a deep understanding of emotion is an understatement. The music they create speaks at lengths of the unique interpretation they have of life and they way people feel. why romantic as the title to express their music? Feinstein realized that our society has this romanticised view of mental illness and instability of people who have some merit and are mentally ill. Or have problems that they can't handle. Our society tends to look at that from romanticised standpoint, Cool to look well-tortured artist is sexy.

Understated vocals against a melodic and laid back indie rock soundtrack make 'Softer' a very accessible and likable song. It's one of those songs that just drew me in, so much so, that by the end, I was checking out the album release details, pretty much as an automatic response.