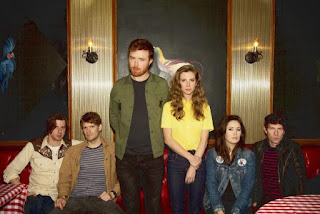 Fast Romantics - Why We Fight.

Background - "Why We Fight" is the new single from Toronto 6-piece Fast Romantics. "Why We Fight" is taken from the band’s forthcoming album (set for release in Spring, 2017). Both are released via Light Organ Records/Postwar Records.

Anthemic in the truest sense, "Why We Fight" rushes with an energy akin to early music from fellow Canadian indie-rockers Arcade Fire, but with lashings of raw Bruce Springsteen-esque fire. It's perhaps of no surprise, given the Springsteen comparison, that "Why We Fight" was born at a time of political turmoil, written as the US election campaign was underway.

However, "Why We Fight" is not a protest song, in the traditional sense. It is perhaps best described as the reflections of a non-American songwriter living close to the border, hyper-aware of the US and its influence over Canada and the world. It's a song about being hungry for something, and fighting for it through chaos that can be beyond our control.

As Fast Romantics songwriter, singer and guitarist Matthew Angus explains: "'Why We Fight' started out as a song about myself, about what it is that drives me to even be in a band in the first place. But it quickly evolved into an ode to anyone who finds themselves hungry for something that might seem out of reach.” Website here, Facebook here.

If you enjoy a nice powerful rocker, with feisty vocals and a solid band behind, then 'Why We Fight' should tick all your boxes, and more. 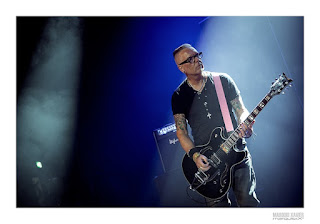 Background - Legendary producer John Fryer, one of the most innovative sonic architects on the music scene, is releasing new music under his new project Black Needle Noise, dubbed “the spiritual successor to This Mortal Coil” by Cold War Night Life. Best known for his production work, he also branched out as a musician as one of only two constant members of This Mortal Coil (along with Ivo Watts-Russell), providing keyboards, strings and synthesizer sequencing for the band, and its offshoot, The Hope Blister.

In 1979, John Fryer started his career at London’s Blackwing Studios (London) and soon began working with seminal bands on the 4AD, Mute, Rough Trade and Beggars Banquet record labels, including Depeche Mode, The Wolfgang Press and Cocteau Twins. His achievement in helping develop the latter’s pioneering ethereal and ambient sound ultimately led Watts-Russell to recruit Fryer as his partner for This Mortal Coil.

He has produced many other groundbreaking artists, including Yaz (Yazoo), Nine Inch Nails, Clan of Xymox, Nitzer Ebb, Love and Rockets, Xmal Deutschland, Fields of the Nephilim, De/Vision and Stabbing Westward, Swans, HIM, Cradle of Filth, Jesus Jones, Swallow, M|A|R|R|S (A.R.Kane & Colourbox), and many others. More recent projects involve Dead Leaf Echo and The Foreign Resort.

'Swimming Through Dreams' to quote Mary Poppins is "practically perfect". Musically grand with the haunting voice of Mimi Page, this is fabulous. 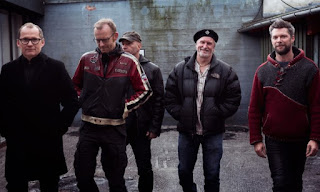 Following the band’s politically charged previous release “Fear of Fear” combining foot-stomping Folk Rock with a serious political message, Neil Brophy Band call upon their humourous side to bring the kind of party atmosphere the group are best known for with the high-energy “Where The Bears Go Fishing”.

Delivering their social banter in a contemporary Folk Rock style with humour, uplifting lyrical kicks and melodies bursting at the seams with energy, the Uke/banjo-driven getaway anthem is jammed full of sentiment reflecting on lead singer and songsmith Neil Brophy’s travels through the majestic Nordic outdoors. The popular festival favourites draw upon their unique storytelling talents to recall warming tales of fishing, campfire harmonies, running from bears and the great Northern lights. Not many bands have nailed Aurora Borealis in a song but Neil Brophy Band own this one.

“Where the Bears Go Fishing is a pure, uplifting hoe-down, feel good track, a lot different from the normal stuff we do, but playing it live gets the crowd up on their feet every time. There’s something about a Ukulele that sets a happy mood and the song just seems to naturally follow.” - Neil Brophy Website here, Facebook here. Fear Of Fear mp3 here. See our tour page for live dates.

Described above as upbeat and rowdy, what can I add for 'Where the Bears Go Fishing'. Maybe just that it's another foot stomper with a chorus that demands you to join in, and dance along if you must. 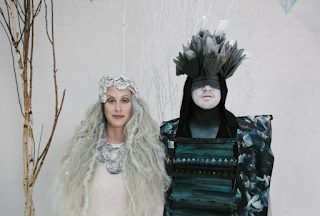 Background - After releasing 2012's Iron Horse Running and touring the world playing sold-out arenas with Alanis Morissette, an inspired Souleye returned to the studio to begin work on his next full-length album. With a wealth of new material, Souleye released his album Shapeshifting in October 2015 featuring lead singles, "The Victim" and "Labeled". Shapeshifting effortlessly joins old-school hip hop with trip-hop...it's a psychedelic, otherworldly exploration.

"The Victim' touches on some deep issues that I feel many people, myself included, struggle with. The victim-consciousness, or the 'poor me' mentality, is a darker aspect of our shadow-selves that we must first embrace, then work through. We hold onto old patterns and traumas that happened to us in the past, and this song speaks to releasing and freeing ourselves from all things that hold us back and keep us in a victim state."- Souleye

Shapeshifting as well as "Labeled" and "The Victim" received an honorable amount of press and was featured on sites such as Yahoo Music, Thisis50, The Hype Magazine, Triple HQ and more. "Labeled" made it to the top 20 Official European Independent music charts. Muzic Notez touted, "Not only is he a brilliantly gifted lyricist but his music delivers a strong and positive message. Facebook here. Buy mp3 here.

'Snow Angel' is not typical of the music Beehive Candy usually carries, however I was fascinated to see how Alanis Morissette squared up to this genre, and the fact is, she does so remarkably well. More than that I actually really like the song and Souleye is most definitely now on my radar. 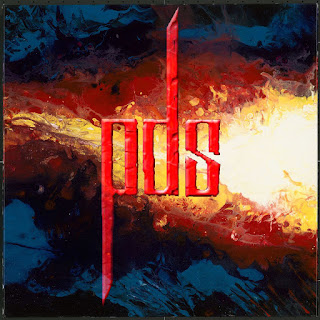 Background - Post Death Soundtrack is a Canadian inter-city music collective consisting of Kenneth Buck, Steve Moore and Jon Ireson. Founded in Calgary in 2007 by Buck and Moore, the band now operates out of Vancouver, Calgary and Toronto using the magic of the internet to collaborate across the country. The group creates thought-provoking music by weaving together electronic, industrial, pop and rock sounds. Side-line.com calls their sound “indefinable" while Reflections of Darkness calls them "by no means music for simple minds”.

Now after a 3 year hiatus, Post Death Soundtrack is back with The Unlearning Curve. The latest 9 track collection is an eclectic narrative about dropping concepts, healing and venturing into the unknown. Equal parts Alice in Wonderland, J. Krishnamurti and dream language, The Unlearning Curve pulls as much from psych era Beatles and David Bowie as it does from modern industrial rock. The record was recorded at a number of studios, primarily in Vancouver. It was mastered at Suite Sound Labs, Vancouver and the album cover is an original painting by Toronto artist Kayla Aileen Brown. The album is available as a free download as well as in limited edition vinyl format. Bandcamp here, Facebook here.

'Transform in White Light', slowly builds into an electro rock song and then explores and morphs here and there, whilst retaining an overall feel to the song. 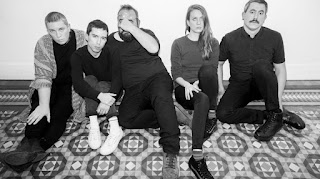 Background - There is no doubt Anímic’s new move will be mistaken for an attack against the loyal relationship between band and followers… meanwhile, others will take it for what it truly is: a golden chance to renew vowels of fidelity with a formation capable of cutting the deck even after the sprint involving their last two albums, “Hannah” and “Hannibal”. The question is out there: Anímic’s new album, “Skin”, is a change, a break, a transformation, but it is a mutation where we really don’t mind not being able to (almost) not recognise the body, because the soul speaks so loudly, so clearly from inside, that that is all that matters.

The easy thing would be to say they have turned to electronic music and that there is nothing left of the Anímic you could so easily imagine in a luminous space in the forest, surrounded by powerful greens and fresh air… but that would be to simple. The bands last two albums had already invited us into the depths of that forest, to a place where day gave into night, threat could be smelt in the air and the green became a black that would beat to the rhythm of a powerful, urgent heart, a heart with a thousand faces. “Skin” simply continues exploring those same shadows, but this time, with a torch that emits a new and surprising light. The magic is still present, like it always has been, how can we explain if not, that delicious feeling when listening to Anímic even if your mind is telling you something different to what it used to be. Website here, Facebook here. Buy Gem mp3 here.

The first album track 'Gem' gives a flavour of where Animic are headed with the new collection of songs 'Skin'. Personally I think this is a really fine collection of material, a little bit Radiohead, in as much as your just not certain what each song will develop into. 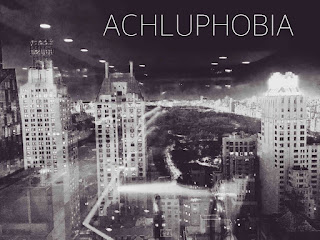 Background - “Achluphobia”, is the blistering new single based on the fear of darkness from NYC’s post-punk duo NØMADS, who are re-emerging after taking 2016 off from recording and touring. The duo is now announcing their new album Phobiac that’ll be released in 2018, which is the follow-up to their acclaimed debut Free My Animal.

Phobiac is a conceptual collection of 12 songs based on different phobias, one of which will be released each month in the coming year. They initially teased the project back in 2015 with the release of "Traumatophobia", aka the fear of pain.

The return of NØMADS at this point in time is no coincidence… fear, as an abstract force, has never held a stronger place in our society than it does today. It colors everything we see outside of ourselves. Each song on Phobiac examines the fear process through the prism of rare clinical phobias, all approached in the abstract. The buried message within this set of material is a cautionary one: when we succumb to fear, chaos reigns. Technically speaking, it is generally accepted that phobias arise from a combination of external events and internal predispositions (i.e. heredity or genetics). Many specific phobias can be traced back to a specific triggering event, usually a traumatic experience at an early age.

NØMADS' partners Nathan Lithgow and Garth Macaleavey paused in 2016 to focus on their respective parallel lives - one a budding sommelier in the NYC fine-dining restaurant world and bassist for My Brightest Diamond, the other the technical director for Williamsburg's most respected new music venue, National Sawdust. With “Achluphobia” and the Phobiac announcement, NØMADS is officially back for 2017… there's no need to be afraid. Facebook here.

No nonsense with 'Achluphobia'. It's a powerful full on rocker, where the vocals pour out every last gasp of breath and the guitars and drums take a pounding. Raw and solid, it's also highly addictive.