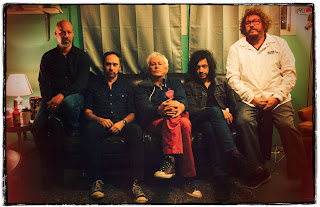 Guided By Voices - Dr. Feelgood Falls Off The Ocean.

Background - Guided By Voices August By Cake (April 7, GBV Inc Records) is the 100th studio album that Robert Pollard has released since 1986's Forever Since Breakfast. To put that in perspective, Bob Dylan has released roughly 39 studio albums since 1959. And that includes the Traveling Wilburys.

A highly anticipated record with the new line-up (returning GBV veterans Doug Gillard and Kevin March, virgins Bobby Bare Jr and Mark Shue) that has been wowing audience in clubs and festivals throughout 2016. It's the most musically adept and versatile line-up Pollard has ever assembled.

With 32 songs, August By Cake is also GBV's first ever double-album, and song contributions from all five bandmembers is additional icing on this particular cake, setting album #100 apart from the previous 99.

The double album is an important format in Pollard's own musical iconography, and he doesn't take the form lightly -- one reason he's planned and abandoned several would-be GBV double albums in the past is his high regard for foundational works like Quadrophenia, the White Album, The Lamb Lies Down on Broadway, Daydream Nation, Zen Arcade, Double Nickels On the Dime -- "defining records for these bands," says Pollard. It's important to him that August By Cake not just be a double album but that it be a great double album. Spring tour dates are over on Beehive Candy's tour news page. Website here.

Powerful and demanding our attention right from the start 'Dr. Feelgood Falls Off The Ocean' has an urgency and even some roughness about it, easily described as naturally raw rock'n'roll. With a double album on it's way GBV fans should be full of expectation based on this track alone. 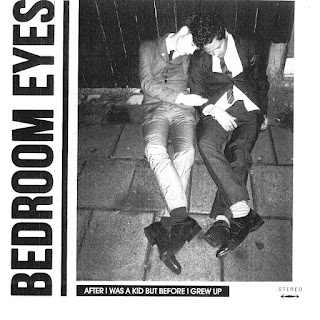 Bedroom Eyes - After I Was A Kid But Before I Grew Up.

Background - The first single out from Bedroom Eyes sophomore album "Greetings From Northern Sweden" (Startracks, May 12th) is the guitar driven, melody tangled and wonderful "After I Was A Kid But Before I Grew Up". Speedy and intriguing indie pop.

With his debut album, released back in 2010, getting raving press from the likes of Rolling Stone ("a strong songwriter"), Vice ("beautiful artist"), Der Spiegel ("marvelous songs blessed with harmony") and Swedish national radio P3 ("next big thing in Swedish pop") there's a lot of anticipation leading up the new release.

"After I Was A Kid But Before I Grew Up" is out now on all digital platforms via Startracks.

'After I Was A Kid But Before I Grew Up' blasts into action with urgent riffs and a blazing rhythm softened only by vocals that are a little more refined. Full on indie rock! 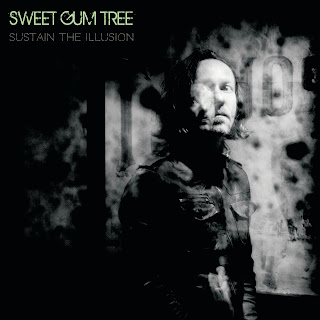 Background - Sweet Gum Tree reveals a video for new single 'Someday', taken from his second album 'Sustain The Illusion'. Both a beautiful, romantic adventure and an unnerving trip through a mind crowded with troubled creatures, Sojo’s earnest vocals confirm that he is amongst those who still believe that music and words can touch the soul, by way of sincerity, constant reinvention and fine craftsmanship.

Minimal drum machines and echo-laden guitars throughout create a state of grace evoking the ethereal new-wave productions of British label 4AD as well as hymns from great pop architects like Talk Talk, Prefab Sprout or Divine Comedy. The album’s electronic rigidity contrasts perfectly with the elegant strings and soaring melodies, while Sojo’s gravelled vocals ensure it remains an outstandingly humane and sensitive collection of tracks.

The album’s title nods to Wes Anderson’s acclaimed, ‘‘The Grand Budapest Hotel’’, which itself was based upon Stefan Zweig’s writings on the rise of Nazism in the mid-30’s. Drawing a parallel with the current fiery state of the world and Anderson’s tale of creating love despite all circumstances, Sojo reflects on the challenge of how one can fulfil the need to dream whilst in such a desperate context.

The soul in Sojo’s voice is what really drives ‘Sustain The Illusion’, particularly on tracks such as ‘Someday’, ‘Guilt Trip’ and the closing lullaby, ‘Keeper’ that lulls you into a complete sense of security. On the other hand, ‘Burn Your Icons’ is both a thought provoking, sharp and ironic look at the relevant question of how we view our fallen idols that gives a truly unique perspective on our society’s traditions. Website here, Facebook here.

The song has a peaceful and melodic soundtrack that suggests plenty of attention to detail, whilst keeping an understated vibe, with just a small surge of power towards the end. The vocals have emotion and the lyrics are intelligent and delivered almost as a plea on occasions. 'Someday' is a wonderful song. 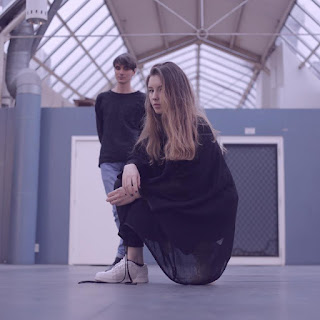 Background - Physical are Wellington, New Zealand based duo Julia Parr (Black City Lights), and Nik Brinkman (Junica, Over the Atlantic). They met in a karaoke bar in Chinatown, New York in 2013: They sang ‘Drive’ by The Cars.

In 2015, Nik approached Julia to write together as a contribution to his project Ghostwriters Collective. Twelve months and 8 tracks later, they had written and recorded their debut album, an unapologetically upbeat but dramatic pop record – ‘Ride it Out,’ out later this year (release date TBD). The record is about emotional survival for lovers and staying up late; a shout out to their deep mutual love for future R&B and synth pop.

Today the band shares the album's latest single "Islands." "I guess I’ve never really poured my own relationships into my songs before, but this album includes some of the most personal songs I’ve written," Julia Parr explains. "Islands is about someone I met on her travels through New Zealand. We went on a lush island getaway together but when we settled back into real life I started to feel like I was tying her down to one place. Nik wanted to write a song about ‘paradise’ and the song Islands just fell into place. We wanted the track to evoke that floating feeling of being in paradise but with an unsteadiness; the feeling in the pit of your stomach that something isn’t right." Instagram here.

'Islands' is a highly crafted indie pop song, where the vocals and synthy music contrast with each other adding to the overall style and quality. Add in some passion and gentle melody and you have one impressive and catchy song. 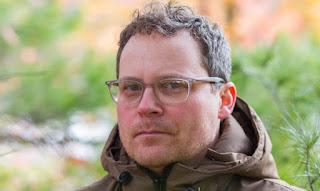 Background - Stutter Steps debut new track 'Floored' from their upcoming 12" Floored on Blue Arrow Records. Stutter Steps released their debut album on Wild Kindness records at the end of 2015. Group mastermind Ben Harrison, a curator at the Andy Warhol Museum in Pittsburgh, and collaborator with Dean Wareham (Galaxie 500/Luna/etc.), crafted one of the bittersweetest indiepop debuts in years.

Critics who took the time to listen were stunned. With its jangling guitars and plaintive organ, its literate heartfelt lyrics and the skip in its step, Stutter Steps sounds like the missing link between early Flying Nun and the Go-Betweens (geographically, this would put then in the middle of the Tasman Sea and I hope they’ve got a boat).

They return now with a new six-song EP, Floored, on Blue Arrow Records, home of Jonathan Richman among others, that expands on the promise of the debut. Harrison has the rare ability to combine emotions in a song, so ‘Encino,’ with its wistful chords and lyrics of regret, becomes greater than the sum of its parts. The organ on ‘Weak Restraint’ makes you dance (Stutter Steps has never sounded more like The Clean than they do here) while the words make you weep. It would take a heart of orange granite not to be moved.

Stutter Steps make music for grown-ups, the grown-ups who haven’t forgotten what it feels like to be a kid. Facebook here.

Guitars and drums set a fairly intense pace for 'Floored', which contrasts beautifully with the seemingly less urgent, yet melodic vocals and gorgeous harmonies which all put together, make this such a fine and addictive song.