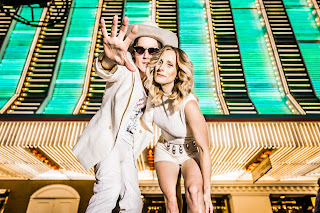 Background - Retro psychedelic pop bubbles up on “Nighthawks,” a new song out now from Panther In The Dollhouse that questions the constructs of perpetrator and victim on the streets. “Nighthawks” is a companion piece to the slow-burner “Evangelina,” (from the album Leave No Bridge Unburned), in which the namesake character is a sex worker superhero, in celebration of those who challenged Canada’s prostitution laws at the Supreme Court of Canada in 2013.

“Nighthawks” (recently performed live in a 5-star Minneapolis diner of the same name) is one example of Panther In The Dollhouse’s deep dive into body politics. Throughout the album, Whitehorse explore issues of consent, self-determination and, ultimately, freedom, largely from the perspective of women. Alongside “Boys Like You,” the grindhouse ballad of “Die Alone” and the peroxide burn of “Trophy Wife,” Panther In The Dollhouse paints a conflicted picture of domesticity and adulthood. Seedy, slinky and suggestive, the characters that populate Panther In The Dollhouse do what they can, what they must and – often – what they really shouldn’t (but can’t resist).

In their six years, Whitehorse has been known as a folk duo, a neo-noir Americana outfit, and as live looping mad scientists. Now, Whitehorse lets loose with a brand new full band, on glorious display in Part 1 of their CBC's First Play Live session. See "Nighthawks," "Evangelina" (never before performed live) and other songs here.

Whitehorse have also just been announced to perform as part of the upcoming Canadian Songwriters Hall of Fame induction of Neil Young, Bruce Cockburn and others. Further details of Whitehorse’s role in this ceremony will be released soon. Panther In The Dollhouse will be released to the UK August 4th, 2017. Website here, Facebook here.

There's an addictive feel right from the start on 'Nighthawks' a rhythmic, melodic and psychedelic pop song. The shades and shadows on the video add additional atmosphere to this brooding piece. 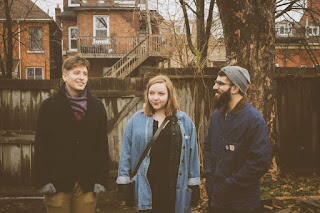 Background from Basement Revolver - 'Johnny Pt. 2' follows last year's EP and debut single 'Johnny'. This new track continues the story. Johnny Pt. 2 was written almost directly after I broke up with “Johnny” - it was the heartbreak caused by an end, the wish that I could have been better, and the desire to continue a friendship.

When a friendship wasn't possible, I wanted them to know that heartbreak or not, I would be there if needed - I would put aside all the things that broke our relationship and the things that gave me identity for a chance at friendship. In hindsight, I have since learned a lot about myself, and that I don't need to disappear in order to have people that I care about in life.

The song comes from our forthcoming second EP 'Agatha' out this July 21st on Yellow K Records in the US and fear of missing out in Europe. Facebook here.

Having been bowled over by last years debut single 'Johnny', the arrival of 'Johnny Pt. 2' has expectations set high. The story may continue however this is no copycat piece. The song is alt rock with the vocals carrying the melody and the music adding depth. The band have a distinct sound, they can also pen and perform to a consistently high standard. 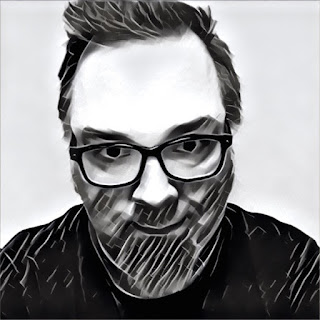 Inspired by David Bowie’s use of the “cut-up” technique for writing lyrics, McGettrick thought it would be fun to test the method on Shakespeare’s words and characters. His “cut-up” process was as follows: Select the character, Isolate their lines, Randomize their lines, Curate into new lyrics, and Compose an original melody. The songs were originally conceived as an acoustic project for the February 2016 RPM Challenge, but he quickly realized they needed the weighty production of a full band.

The William Shakes have now released a new music video for "Leaden Messengers," the second single off their How Goes The Night? EP. The track kicks off with a Hives-inspired drum beat, but interestingly retains the cadence of Shakespeare's prose throughout. "Leaden Messengers" is based on the words of Helena, the protagonist of Shakespeare's All's Well That Ends Well. Lyrically, it explores the feeling of wanting to profess your love for someone, but not being able to find the right words; words are the metaphorical leaden messengers.

'Leaden Messengers' is the second song we have featured by The William Shakes. Vocals are a focal point, however the band ensure the music is crisp and energised and round the song off with some fine harmonies.