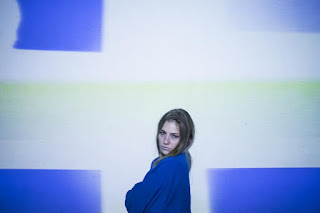 Background - Beiju shares the first track "Movin On" off her upcoming EP. Demain is due July 7, 2017. Raised in the outskirts of Paris, Caitlin Seager was heavily influenced by contemporary jazz and the avant-garde art world as a child before moving to New York City at 18. She began singing in the growing Brooklyn DIY scene at such venues as the storied 285 Kent alongside local stalwarts like DIIV with her group Night Manager, culminating in full-length releases on Fire Talk and Big Love. As the front singer in Night Manager she developed her acrobatic vocal style that has become her signature.

Beiju, her debut as a composer and producer, was initially a way for her to experiment with the funk and house music that resonated with her from her youth. Sonically the record nods to James Blake, kaytrananda, FKA TWIGS and FlyLo but remains grounded in her unique lived experiences. The relationship to time, and the unending struggle between motivation and action are brought to light in a blend of house, electronic and experimental pop. The forthcoming EP Demain is the result of many long nights experimenting on Ableton Live and collaboration with engineer Lillia Betz, who brought her shiny glossy touch to the production.

“Movin On” picks up the pieces and revels in newfound freedom through acid breaks and lush textural environs, culminating in a propulsive hook that sits comfortably in the classic house canon. The future bass single is paradoxically about feeling stuck in bad habits and unhealthy situations while not being able to change anything. Although the song is very upbeat, the lyrics are in contrast about feeling helpless and paralyzed. Its playful and ironic, but like any good laugh, behind the ridicule lays a darker statement. Bandcamp here, Facebook here.

'Movin On' is an intricate and yet flowing electronic song. Musically it twists and turns whilst the beautiful vocals act as a focal point. As a taster for the Demain EP, this is superb. 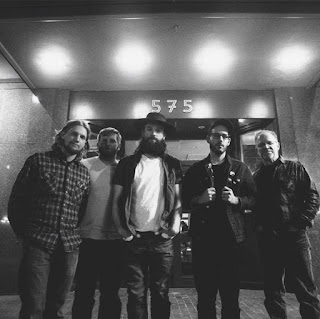 Background - Town Meeting, have released the new track, “West of Seattle,” from their upcoming EP, Geography: Part 1, due July 28, 2017.

Influenced by a wide range of musical acts from Dawes to Crosby, Stills, Nash, and Young, the group was formed in 2014 by brothers Luke (vocals/guitar) and Russ Condon (vocal/cajon). Dean Adrien(vocals/lead guitar), formerly of Orphan, joined in April of 2013.

With years of music experience under his belt alongside the likes of Jonathan Edwards, Tom Rush and several others from the Boston Folk scene. Tim Cackett (guitar/bass/mandolin player) joined the band in October 2013. Tim had spent several years prior playing guitar in the various hardcore bands (Anchorlines, Hope Prevails) and his solo acoustic folk project, Poor Soul. Brendan “Babe” Condon (vocals/harmonica/percussion), the youngest brother, rounded out the group’s vocal harmonies in 2014.

Soon after the lineup was solidified, the band played shows with Sturgill Simpson, Willie Nelson and Old Crow Medicine Show and dropped their debut, If I Die (2016). Over the past year, the five have been putting the finishing touches on the Geography series. Website here, Facebook here.

Regardless of the above mentioned influences Town Meeting have developed and crafted their own distinct and refined sound. 'West Of Seattle' just oozes Americana vibes, along with a timeless feel. Having opened for the likes of Bob Dylan, tracks like this demonstrate why, this is modern folk with a clear vintage calibre.