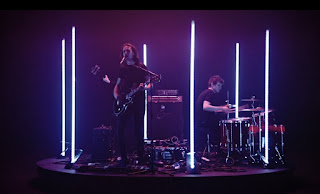 Background - London based alternative/indie rock trio Desert Mountain Tribe are releasing the song ‘Interstellar’ from their 2016 debut album ‘Either That Or The Moon’ as a new single. It coincides with the band’s appearance at Manchester Psych Fest 2017 on 2nd September.

Edited from its original nine minute duration to just under five, the BVB Version of this epic track also boasts a superb video directed by Daniel Turner of Sound & Colour.

Turner explains the extraordinary camera method employed on the promo clip as follows : “It is effectively made to look like one single shot - going from wide to super close up, with the band rotating on a stage, speeding up and slowing down in a sort of ‘Matrix’ effect, with lights flashing and streaking in sync with the music. Together with my Director of Photography, I have developed a way to use multiple cameras to make a super-huge frame that we can zoom in and out of, and a way to time all the effects to the music.”

‘Interstellar’ follows a pair of digital EP’s, ‘If You Don’t Know Can You Don’t Know Köln’ and ‘Live At St. Pancras Old Church’, plus the single ‘Enos In Space (Top Of The World)’, which was mixed by Youth. The band have also spent much of 2017 on the road, including an extensive spring tour of North America and summer festivals in mainland Europe.

Formed in 2012, Desert Mountain Tribe released their debut album ‘Either That Or The Moon’ in the spring of 2016 to positive reviews from UK publications such as Shindig, Classic Rock, Louder Than War, Drowned In Sound and The Arts Desk. The album achieved heavy rotation at US college radio, while their latest single has received support across BBC 6 Music. Facebook here.

Powerful and expansive ‘Interstellar’ teases the listener on first listen, with it's beautiful refrains and moments of high energy. In between this, there are some superb vocals and the wonderfully epic guitar solo's, just add to the bands sense of drama. 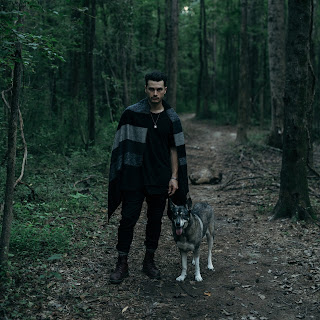 Background - Vampire Diaries actor Michael Malarkey’s has just dropped a new single called Uncomfortably Numb, written about the overbearing expectations placed on an artist thrust into the spotlight, it’s pretty fitting to the man behind the music.

Michael is about to release his debut album called Mongrels this September followed but a full set of EU/UK Tour dates booked in (below). Described as “folktronica” by Metro, the new record is a modern mash up of Nick Cave and the Bad Seeds with Tom Waits.

Quote from Michael: It is about disconnectedness to this society but being forced to participate in it anyway, the contrast in the music and the lyrics reflects the unpredictability of mood swings and depression, the subconscious games we play with ourselves, how we react to that feeling of flight or fight when neither are appropriate, the love/hate relationship with addiction.

Whatever crutches people turn to out of desperation or habit when walking through this world becomes tiresome - and the sometimes overbearing expectations placed on the reclusive artist thrust into the spotlight and forced to deal with the unquenchable thirst of the public. All of which magnifies the internal battle of lightness and darkness, the animal vs the man, the reclusive artist vs the public performer. It’s a fight song for the soul. This struggle is one of the main themes of the record. What does it take to be man? Is that even the right question? Facebook here.

Second song this month from Michael Malarkey this time with 'Uncomfortably Numb'. We stated last time that "The album comprises a fine mixture of material, occasionally dark in nature (but only occasionally), the refined melodies and desirable feel of each song, makes for a rich and pleasing listen. This deserves to be heard not because of The Vampire Diaries, but because it is a very affecting album". This song I hope endorses our opinion, enjoy!