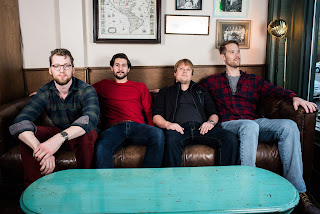 Background - The Begowatts craft a distinctive blend of rock & roll, rooted in deep 70’s grooves with an ear toward modern atmospheric aesthetics. Formed in 2012 in Madison, Wisconsin, the band built buzz across the Midwest and honed their live presence through relentless touring and Pabst Blue Ribbon consumption. Along the way, the foursome’s sound evolved at a steady clip. While early Begowatts paid faithful homage to classic rock, the band has matured toward a tighter, more immediate fusion of old and new which they christen, “21st century electric rock & roll.”

Within a short time they went from packing basement parties to being the house band at Madison’s world famous Bike Shop and released their self-titled EP in 2015. The EP’s response gave the band the confidence they needed to pony up for a professionally recorded full length debut, and in June of 2016 they released the LP, Photoelectric, to glowing reviews and nominations for the Madison Area Music Awards “Alternative Album” and “Alternative Performer of the Year.”

The group’s sophomore effort, Grand Charade, is scheduled for release this September. Written during the whirlwind of the 2016 election, their new tunes reflect the great division they bore witness to. Songs like the Clash-esque “Kids On Parole” hark back to the politically-charged rock of the late 70’s, while the closing number "You & I" is drenched in dreamlike tension and disillusion, conjuring up a decidedly brooding Twin Peaks vibe. Yet throughout it all, the sound remains undeniably their own in its signature exuberant, carefree coolness. Begofans will find that the group has grown leaps and bounds on Grand Charade, refining their sound and emerging as new contender in the current post-punk scene. Website here, Facebook here.

Six tracks make up 'Grand Charade' an EP we can feature in full. They describe their music as "21st century rock & roll" which seems a more than reasonable summary of the music. Each song has it's hooks, the music is very well crafted and the vocals have plenty of real rock edge. As a whole this is a very likable collection of natural modern rock & roll. 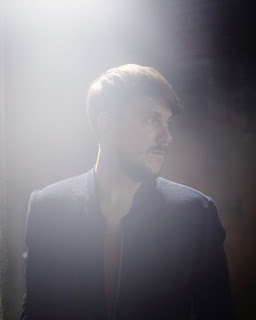 Background - We have the new song "Young" from one of Switzerland's finest Lower Pink. The Swiss music press delivers one rave review after another about the independent troubadour.

It is not by chance, that we read & hear such praise. “Lower Pink” achieved the creation of his own atmosphere on his new single “Young” – and he fills this atmosphere with voice, synths & spherical pads. On the climax, the song literally erupts over the listener, just to leave behind a barren silence and to disappear. Immediately, his warm voice finds time & space again.

“Young” is a listening experience and the video, which you can find attached to this, is painting a euphoric feeling through impressive pictures and an unagitated storyline – leaving behind an echo. The video has been shot in the Swiss alps transmits in images, what the music lets us feel: Distance and vicinity – for once unisono. Website here.

As the song gently develops it's the vocals that standout and rightly so. 'Young' is a song where the atmosphere expands beautifully, the music adds some extra layers, however it's the voice that resonates and demands another listen. 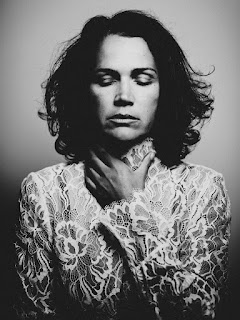 Background - Amsterdam singer songwriter, VanWyck, follows up the 2016 single that KCRW’s Chris Douridas called “exquisite” with her new single,“An Average Woman”. The title track is off the album due out on January 19 on Maiden Name Records. Hauntingly atmospheric and melodious, the songs on the album unravel in a spiral of smoky soulful vocals aching with lyrical precision of stories untold.

An Average Woman is about women who are visible and hidden, sacrificing and selfish, ordinary and magical, obligated and free. It's about the mysteries lurking in the everyday. It's about creating your own universe and your own sense of belonging - and stumbling along the way.

The lead single is about being braver, bolder, and sometimes selfish. Written in the past tense, it’s almost like a funeral song, burying the average woman in order for the creative woman to emerge. VanWyck says, “Both my grandmothers were strong women (a nurse and a teacher) who came from very humble backgrounds and had to work hard and take care of children.

Being creative was a luxury that was often not allowed to them. Being in the foreground was also not something they were allowed to aspire to. One of my grandmothers was very inspirational in making me reach higher and to put all my talents to work. I keep her picture as a young girl on my desktop to remind me of the chances she never had and the way she pushed me to reach higher.” Website here., Facebook here.

A slow bluesy vibe is there from the beginning on 'An Average Woman'. VanWyck's vocals are melodic, sensitive and carry some notable emotion. The musical arrangement develops adding even more to a gorgeous soulful song. 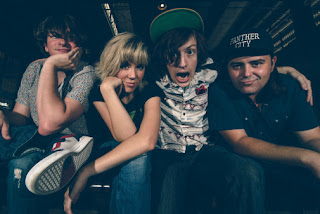 Background - Mean Motor Scooter are a fuzzed up, farfed out, Fort Worth quartet of psych-garage goodness firmly rooted in the Texas traditions of The Butthole Surfers, The Dicks, and Roky Erickson with a tab of Scratch Acid. The band was founded in 2015 by singer and guitar player Sammy Kidd, drummer Jeffrey Friedman and bassist Joe Tacke and almost instantly became overnight local and statewide sensations. The trio played 31 shows in 2015 throughout Texas, including shows at the Dallas Music District Festival, with bands like Leopold and His Fiction and Aaron Behrens.

Mean Motor Scooter released its self-titled EP in August of 2015, which was put out on a limited edition cassette by Dreamy Life Records. In 2016, the band continued the momentum, playing 48 shows, including three unofficial showcases for SXSW and Oaktopia, the Fort Worth Weekly Music Awards Festival, Fort Worth Rock Assembly V and legendary Dallas venue, Trees. In April, Mean Motor Scooter released the singles, “Naked Brunch” and “Such a Seducer,” which received a lot of positive local press and were mentioned in some Best of 2016 lists.

Before finishing the recording of Hindu Flying Machine the trio decided it was time to bring in another member. Rebekah Elizabeth (I Happy Am) was added on the combo organ. Mean Motor Scooter played their 100th live show in July of 2017, at the newly opened Main at South Side. In June the band was awarded “E.P. of the Year,” “Band of the Year” and “Artist of the Year” by Fort Worth Weekly. Hindu Flying Machine will be released in October 2017 by Dirty Water Records USA and the band will be touring in November with The Darts and Escobar. Facebook here.

Psych garage with just a hint of insanity ensures 'Sea Serpent' a timeless feast of music registers within a nano second. Play it loud & leap about! 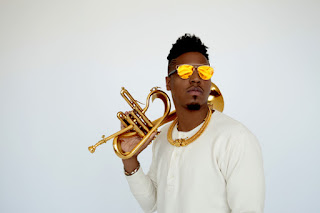 Background - Grammy nominated trumpeter, composer, and producer Christian Scott aTunde Adjuah will release the third installment of a trio of albums commemorating the 100th anniversary of the first jazz recordings. Collectively titled The Centennial Trilogy, the final album in the series The Emancipation Procrastination will be released on October 20th via Ropeadope.

The Emancipation Procrastination the third and final chapter in the trilogy deals directly with the social and political issues of the day. Rather than descend into identity politics, Adjuah sees many disparate cultures in New Orleans being underserved and exploited. This worldview transcends New Orleans, as Christian has traveled and toured the world for almost 20 years, starting as a child and performing with extraordinary players (McCoy Tyner, Donald Harrison, Eddie Palmieri).

The scope of The Centennial Trilogy is not limited to the music; Adjuah uses broad strokes to present his vision of the world. Growing up in New Orleans' Upper Ninth Ward, he witnessed people enduring the same challenges regardless of their race or ethnic background: He saw a community of people undereducated to serve the tourist culture, facing food insecurity, yet viewing each other as different through the lens of race. Seeing this around him, Adjuah came to understand that race is a social construct, and that people could work together to build and move forward.

"I’m not interested in harming anyone," Adjuah says. "I have a responsibility as an artist to create a space where people feel welcome. When I walk outside this hotel room, that is not the reality. There is a difference when music is made with love. When people come into my space they are going to feel that. We are trying to figure out a way to treat each other better. We are all responsible for healing each other.”

The vision of Christian Scott aTunde Adjuah is clear – that this is an opportunity for all of US to come together and address issues that affect ALL of us. Emancipation Procrastination means that we all have an opportunity to liberate ourselves from old world ideas. Let the healing begin. Website here, Facebook here.

Whilst Jazz is not a genre that often appears on Beehive Candy, when the music is this good it would be a crime of sorts not to feature it. 'The Cypher' is a superb track where for me some fairly cliche images come to mind, a hot late night urban scenario for example. When I hear music this good I feel I should know a lot more about the genre, perhaps one day... 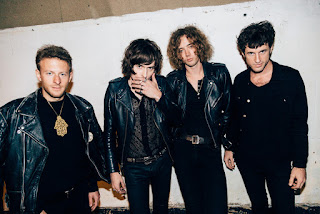 Background - Warbly Jets play synth-driven guitar rock that is a genre-bending blend of punk balladry, wide-screen production and unflinching attitude. The LA quartet will release its self-titled debut album on October 20 but this week they debut the genre-bending churner, "Ride".

Despite a lack of allegiance to any sound or place, since the release of their debut single "Alive", the slithering music industry indictment "The Lowdown", the hip-swaying "4th Coming Bomb" and the maniacle "Shapeshifter", the four piece has grown explosively and earned praise from a number of music sites, radio and the press. The band is climbing the charts at Spotify, VEVO and Apple Music and were announced this morning in the first round of performers for SXSW 2018.

Warbly Jets just completed a massive European tour, including dates with Rival Sons and are returning home to LA for an album release show at The Moroccan Lounge next Thursday, October 19. They then head to Vegas to showcase at Emerge in November. Website here, Facebook here.

I was impressed by Warbly Jets back in July when we first featured them. 'Ride' is another fabulous genre defying song that is loosely alt rock based, the band have psychedelic vibes and the music just gets better!