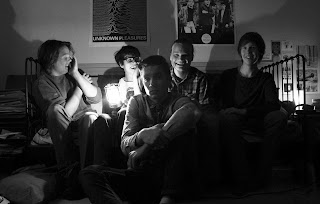 Background - Ghosts on TV are from Helsinki, Finland. They released their latest EP on the 8th of December. Ghosts on TV is a indie rock band formed in 2014 in Helsinki, which combines a broad range of sounds and influences, from post-rock and Radiohead to more conventional post-punk revival such as The National and Interpol, all spiced with a touch of traditional Finnish melancholy.

They have stood out of the usual Finnish indie-scene with this sound, and the first release "Lay yourself down" gathered a good response from Nick Triani at Radio Helsinki and the Finnish music magazine Rumba.

Quoting the band "We started playing shows extensively around Helsinki, from small bars and clubs to established venues such as the legendary Tavastia. In 2016 we released our debut EP, including a sold out vinyl pressing by Royal Mint Records, released a split 7" through said label's 'Mint Singles Club' series, released another handmade 7" for our single 'Brandy' and kept playing shows, even playing our first show abroad in St. Petersburg".

They recently released their second EP, entitled Flowers, which in their opinion is a more mature effort and shows our natural growth as a unit. FACEBOOK.

From the recently released 'Flowers' EP we have the opening song 'A Fool Such As I'. With a gentle acoustic opening, followed by vocals that are full of sentiment and feeling, the piece slowly expands with additional beautiful layers of melodic sound. It's a good indicator for the overall quality of music this band can and does produce. 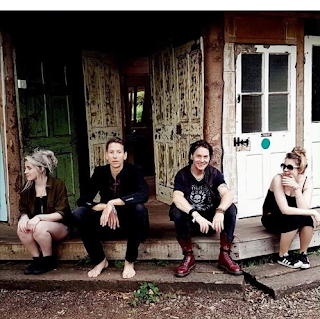 Their debut EP Rattle Them Bones (featuring Wishbone & The Gin Song) was championed by Steve Lamacq and also received positive responses from Tom Robinson & Gary Crowley and lead to them being chosen to open the BBC Introducing stage at The Great Escape 2017. The Gin Song was also one of Steve Lamacq’s ‘Best of the year so far (2017).

The group have spent many months recording their debut album from which Skin is the first single to be released later this year. Skin delves deeper into the darker aspects of human nature and the inner demons each person can be faced with throughout their life.

After playing with a variety of different bands including rockabilly, traditional Irish, indie and nu-folk, these misfits found themselves in a rehearsal room together writing parts for murder ballads involving burying bodies, serial killers, lynch mobs and voodoo witches. FACEBOOK.

Third time around on Beehive Candy for Locks and although we have waited since January for the new single 'Skin', I think it fair to say, the wait was worth it. Bluesy and with a stripped back musical opening when the vocals and harmonies kick in this becomes a rich and very catchy song. I'm left looking forward to their debut album, and some! 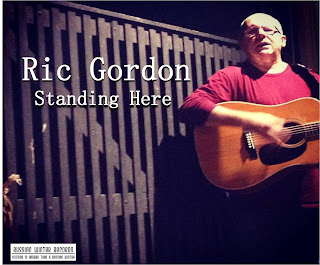 Ric Gordon - When We Kiss.

Background - In a career that spans 5 decades, Ric Gordon has released 14 albums and EP's under various monikers, and produced another 26 for other artists. July 14th, on the eve of his 64th birthday, Ric releases his first studio album in 4 years, but with a twist.

Instead of one album, Russian Winter Records is excited to announce the release of two EPs, one electric and the other acoustic. The first EP, "Despair's Lover," wasl released back in July 14th and is a collection of five songs that are post-punk/punk, raw and edgy.

The second EP, "Standing Here," was released in September and is five songs that are indie/folk-rock, melodic and intimate. Russian Winter Records is an indie label based in the historic Brookside section of Kansas City, MO and founded in 2008. Our releases range across indie genres from punk to electronic to folk. We strive to release artists who make compelling music that needs to be heard. BANDCAMP.

'When We Kiss' is a gorgeous nostalgic sounding song (which is amplifies by the accompanying video). Melodic, dreamy and awash with hooks it typifies the second EP 'Standing Here' from the talented and creative Ric Gordon. 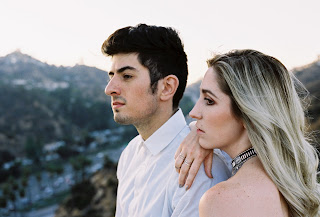 Dana And The Wolf - Him.

Background - The duo's latest single, “Him,” lands at the pinpoint between drama and edge, featuring a gritty beat, moaning electric guitar, and a loop of Hobson’s powerful, yet controlled chanting. The lyrics go after flaws in our relationships, in heaven and on earth: “You could relate it to a man, a toxic relationship with a man, but it could also be a toxic relationship with organized religion,” says Dana.

The track draws inspiration from Wolf’s separation from Judaism at 18 and delves into the ways in which religion, like a domestic abuser, can keep a person trapped in fear.

Dana and The Wolf is comprised of Dana Hobson on vocals and Daniel Wolf as producer, they have been together as a couple for over a decade. In fall of 2017, the group signed to Little Assembly, a division of West One Music Group.

Their style blends elements of drama, pop and hip hop, covering topics from religion to economics; partying to polyamory; and love to hate. Dana and The Wolf's most popular song on 2016 "Attitude" garnered quite a buzz, charting on Spotify's Viral 50 and receiving praise from tastemaker music blogs. WEBSITE, FACEBOOK.

Dana Hobson's vocals are full of blues richness on 'Him' and deserve a fine musical backdrop. Daniel Wolf has that covered and with style and imagination as the music develops adding in some spectacular twists and then in an instant it's over. 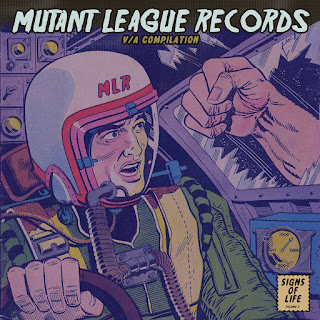 Background - Mutant League Records is celebrating their 5-year anniversary by giving away a free compilation album with music from Belmont, Crywank, Lucky boys Confusion, and more!

Mutant League owner Nate Steinheimer comments on the label's anniversary: Really proud/shocked to still be able to release music under Mutant League 5 years into it. From pawning my stuff early on just to be able to afford postage for our records- to watching MLR bands perform sold-out shows and transform their music into a career; it's been an bizarre but remarkable experience that I wouldn't trade for a big house or bag of money.

The secret is in the record labels name. 'Signs Of Life' is a combination of frantic, full on garage and punk, interspersed with the occasional slower paced and perhaps more refined song. This is a no hassle download and generously free compilation album, from a label that are sitting on top of a powder keg of raw talent and more.