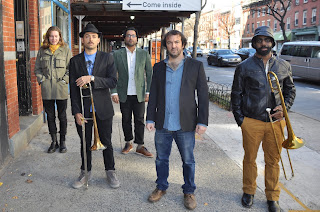 Background - Leading up to the March 9th release of their fifth studio album Blue and White, Brooklyn's Super Hi-Fi have dropped a quirky video for their first single "Little Black Book". Picking-up where they left off with their 2012 release Dub To The Bone, "Little Black Book" once again showcases the band's dual trombone prowess and penchant for heavy bass lines. However, unlike Dub To The Bone, "Little Black Book" draws influence from west African music and the unmistakable rhythms of Afrobeat. The song is bolstered by drummer Madhu Siddappa's shuffling groove and Jon Lipscomb's hypnotic guitar playing which draws the band away from their traditional, dub-heavy reggae roots and into a west African inspired musical amalgam.

The video was created by musician and visual artist Stefan Zeniuk, whose recent work has been featured in Billboard and NPR Music. Specializing in stop-motion animation, Zeniuk used nearly 2,000 images, with a mix of sculpted clay, broken glass and even tic-tac's to achieve the final result. Having produced videos for bassist and band leader Ezra Gale's side-project The Eargoggle, the collaboration came naturally and Zeniuk's unique, visual interpretation of "Little Black Book" matches the songs rhythmic pace perfectly.

"The rhythm of the fast guitar balanced with the slow and long trombone melodies initially popped into my mind a sense of frenetic and fast moving images, abstract and schizoid, fast enough to actually lull the viewer into a meditative and static state." - Stefan Zeniuk

Gale says that "Little Black Book" is essentially a song about people who work jobs that they're ridiculed or hated for. In this instance the ridicule is aimed at an NYC meter maid who is simply making his rounds with 'his little black book'. Slim Blue which is the name that Zeniuk uses to refer to the clay figure featured in the video, is hated by the people that he issues parking tickets to, yet fulfills his appointed duties and carries on with his life. It's a thankless job but someone has to do it and "Little Black Book" conveys this sense of alienation and misunderstanding both through the music and the accompanying video. Gale says, "I wrote it right after I got a parking ticket and I was really pissed off. I was trying to not be so angry and be more empathetic towards people who have a job that makes them do something everyone else hates, and so makes them hated, which isn't really fair. It worked and I wasn't as angry after writing it...for a little while, anyway!" WEBSITE, FACEBOOK.

Super Hi-Fi have taken compatible genres and skillfully moulded them into 'Little Black Book' a fabulous and in the real sense of the word, eclectic song, that suggests the album due in March is one to watch out for. 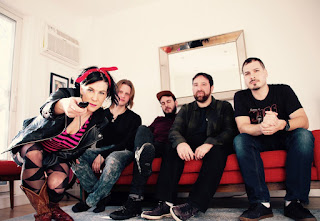 Background - Brooklyn's Typhoid Rosie have announced plans to release their third LP, 'This Is Now,' on March 23. Frontwoman Rosie Rebel explains the song's origins: "It was inspired by Homer's The Odyssey," the singer offers. "Odysseus is faced with every obstacle and temptation but fights as hard as he could to get home. Life is like that: sometimes we have to endure incredible turbulence and storms. I thought about how poor Odysseus had to endure the anger of Poseidon, and all he could do was hold on to a rock while he was being pounded by the waves.

He had no shelter to weather the storm, but his memories somehow carried him through those dark times. So when I wrote this song, I thought about life and all the things in it that are worth fighting for. But more than that, the song is about 'us' and how we should fight for it together. When we work together, there's nothing humanity can't accomplish."

It was back in the summer of 2016 that we first featured Typhoid Rosie, it didn't seem that long ago when the new song 'Sailing On' came our way last week. Powerful rock with some punk vibes thrown in, this is catchy and some! 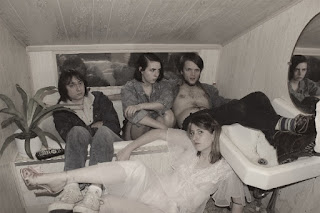 Background - Nihilist Cheerleader debut first single "Drenched In" from their upcoming debut album "Riot, Right?".  (Perfect Attendance Records). Nihilist Cheerleader is making a name for themselves in the thriving Athens/ Atlanta music scene with their raw, Riot Grrrl- inspired punk sound. The band formed in 2015 in Athens, Ga, and found early success in a saturated scene with their new take on an established concept of “punk”. The band brings a charged energy to their live and recorded performances that is engaging and refreshing. Nihilist Cheerleader’s sound appropriately reflects the band’s name in it’s duality- both turbulent and controlled, angsty and uplifting, thoughtful and effortless.

What sets them apart from other musicians in their midsts is their story-like songwriting. Like the artists that have inspired them, the band’s music is largely rooted in political and social commentary.  Their lyrics command the listener to take a closer look at social injustices related to gender and power structures, and ones internal dialogue. Rather than aimlessly identify problems they see, the band’s intention is to start a constructive conversation about how we can combat and resolve such issues. Their songs inspire rebellion, self exploration, change, and especially dance.

Following the release of one EP, three singles, and two southeastern tours, the band is releasing  their first full-length album with Perfect Attendance Records spring of 2018, and will be touring the east coast this summer. In the past two years the band has received multiple music awards from a local publication, voted by the public as best startup band, best punk/hard rock band, and best live performance. The members are excited to release their new music, as well as some accompanying music videos, as their project continues to grow and evolve. FACEBOOK.

'Drenched In' is a vibrant rocker with plenty of melodic hooks, both through the splendid vocals and a band that knock out, some refined rock & roll chords, doing so with class.