The Pinkerton Raid - Where the Wildest Spirits Fly (Album Premiere) 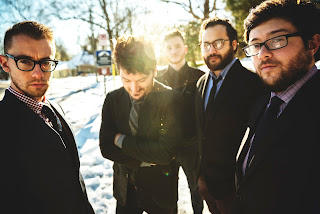 The Pinkerton Raid - Where the Wildest Spirits Fly (New Album).

It’s why The Pinkerton Raid has shared stages with high-energy pop acts like The Collection, The Soil & The Sun and The Old Ceremony or with gentle folk singers like Noah Gunderson, Denison Witmer, The Cactus Blossoms or Lowland Hum. They’ve played notable venues from The Surf Club in St. Paul to the Rock & Roll Hotel in Washington D.C. They’ve also played festivals and music series all over the East Coast and Midwest.

Their self-titled debut in 2012 and their 2014 follow-up A Beautiful World won significant acclaim. Critics have hailed their 2017 effort, Tolerance Ends, Love Begins, comparing the sound to both the dark beauty of The National and the pure joy of Edward Sharpe and The Magnetic Zeroes. Over the course of three full-length albums, the desperate wail of DeConto’s indie-rock songwriting has yielded space to the hooks of classic pop and the charms of twee folk.

Near the start of The Pinkerton Raid’s fourth full-length album, Where the Wildest Spirits Fly, songwriter Jesse James DeConto asks, “Where’s the star to lead us home?” Amid landscapes pigmented with pain, the question is a quest for meaning, in resistance to Camus’ absurdity and the Will-to-Power in the White House. And the answer, over and over again, in a repeating cycle of realistic truth-telling and undeterred hope, is simply this: We sing together.

Musically the band drift stylishly across differing genres, that include Indie rock/folk/pop, with hints of Americana adding more intrigue and anticipation as the album unfolds. Whatever direction they choose, there is always at the very least, a pleasing & fresh vibe.

Vocals and harmonies are notable throughout, as is the tight and engaging musicianship, this is a band that come across as comfortable in what they are doing, and keen to please, something they do consistently. Natural, uncomplicated, melodic and fresh, The Pinkerton Raid have produced a fine album here, we don't do many premieres by choice, this one was to good to pass up on, so dive in and enjoy 'Where the Wildest Spirits Fly.'