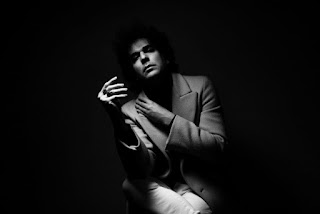 Background - Yonatan Gat recently shared his new album Universalists' opening track "Cue the Machines". The undefinable track opens with an Italo-Spanish choir recorded by Alan Lomax in 1950s Genoa – but it only takes 20 seconds for the voices get manipulated, chopped and mangled beyond recognition into stuttering rhythms below Yonatan's live band – guitar, bass, saxophone and drums working up an uncontrollable maelstrom of punk and free jazz.

Since his days as co-founder of legendary Israeli garage-rockers Monotonix, Gat's music has always had a strong sense of chaos. Getting his start in a band that was wild enough to get banned from their home country has certainly sipped into Gat's manner as a bandleader. And the far-and-wide world travels that come with playing over 1500 shows in 50 countries and 5 continents made another mark on his sound.

Universalists lists numerous collaborators, the most important of which being Silver Jews frontman David Berman credited as album co-producer, in a rare collaboration during a quiet 10 year period. "We were talking about how to contain the live energy in a studio recording," recounts Gat, "Berman was there all along, encouraging me to edit like a writer, filmmaker or painter does. To break the cycle, to capture live energy into wax we talked about subjecting fiery performance to post production, which is another way of saying being hard on yourself."

Leading the release of the 3-year-in-the-making highly anticipated LP, Yonatan will perform a unique concert in NYC's Le Poisson Rouge which he describes as "immersive", in which different musical projects—all led by Gat—will all be playing separate sets in different parts of the venue, blending into each other with no breaks between the sets. Opening the night will be legendary jazz double bassist, multi-instrumentalist, poet and composer William Parker. WEBSITE.

Having heard just three tracks from the 'Universalists, I'm not sure there will be just one song that typifies the collection, such is the eclectic nature of this material. 'Cue The Machines' is a fabulous piece, that I would struggle to describe without just reiterating the above promo description in my own words. It's a case of please listen and I hopefully you will understand where I am coming from. 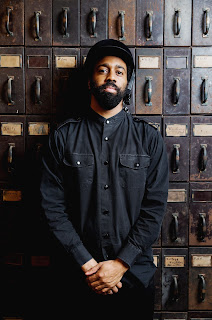 Background - Canadian singer/songwriter, AHI (pronounced EYE) has today announced details of his forthcoming album ‘In Our Time’ which is set for release via 22nd Sentry/Thirty Tigers on August 10, 2018. In-line with announcing the new album, AHI is sharing new single ‘Breakin’ Ground’, his first piece of new music since performing at Nashville’s DIY Musician Conference 2017, attracting the attention of NPR who would later invite him in for a Tiny Desk Session in January 2018 - watch at this link here. AHI will support the forthcoming release date with a string of UK dates to be announced shortly.

First single ‘Breakin’ Ground’ arrives as an inspirational tale stimulated by the songwriter’s own experience of overcoming adversity. It highlights AHI’s honesty, warmth and authenticity, capturing his ability to unify his range of folk, soul and rock influences, personal philosophy and penchant for melody.

AHI’s 2016 independent Canadian debut ‘We Made It Through The Wreckage’ was released digitally worldwide in January 2017. Without any promotion, publicity, marketing or budget to pull from, AHI’s songs were gradually discovered, reaching and converting one new fan at a time. His intimate and captivating live performances only enhanced and accelerated interest. The album began to receive recognition in Canada and beyond with AHI winning the 2017 Canadian Songwriting Competition award for Folk/Singer-Songwriter and the 2017 Stingray Rising Star Award for his infectious song ‘Ol’ Sweet Day’, a song that would make the  Billboard Spotify Viral 50 Chart and go on to receive over 2.4 million streams. WEBSITE.

What a voice AHI has and his delivery on 'Breakin' Ground' is just so good! Bluesy, rocky and soulful the song is addictive, simple as that. 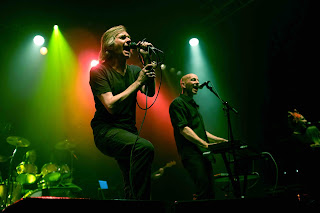 Shriekback - And The Rain.

Background - Seminal British alternative rock outfit Shriekback has announced they will release their fourteenth album ‘Why Anything? Why This?’ on May 25. As a teaser, they are previewingthe first single ‘And The Rain’, along with a darkly intriguing video filmed by Howard Davidson (a.k.a. Hodah).

Shriekback was formed in 1980 by ex-XTC keyboardist Barry Andrews and bassist Dave Allen on his departure from Gang Of Four, in collaboration with guitarist Carl Marsh from Out On Blue Six. Under the auspices of the visionary Y Records label (home to The Slits, The Pop Group and Pigbag), the group found their voice experimenting in EMI Music’s KPM demo studio in London, refining a uniquely recognizable sound in 1982 on their first full-length album ‘Care’ and eventually achieving wider recognition with the singles ‘Lined Up’ and ‘My Spine (Is The Bassline)’. In 1983, they were joined by drummer Martyn Barker (King Swamp, Billy Bragg).

A move to a major label, Arista, allowed the band to fully realize their sound on ‘Oil & Gold’(1985), a milestone album that remains the band’s best-known (helped by the success of the single ‘Nemesis’) and the foundation of their popularity on the US college circuit and elsewhere.

‘And The Rain’ is dark and infectious, conjuring up steamy, swampy, Southern Gothic blues. This 14th studio album, which boasts a wide, organic and detailed sound, is already being described by early listeners as their best since the landmark album ‘Oil & Gold’. The sound is dense, woody and fibrous. Here we find evolved Bo Diddley beats and African blues”. However you describe it, this is Shriekback refocused, reinvented and reinvigorated.

Band members have also pushed themselves musically and sonically – Barry contributes a lot of guitar, Carl has essayed some slide guitar and keyboards and Martyn has brought in a whole arsenal of world percussion alongside his drumkit. Regular Shriekback listeners will hear more guitars and live drums and fewer loops and electronics. The sonic palette is very broad.

New collaborator Scott Firth (of P.i.L) adds irrefutable bass to selected tracks, while Shriekback regulars Wendy and Sarah Partridge contribute their ever-invaluable backing vocals. Live drums were recorded by Ian Caple (who’s been with Shriekback since the beginning) at Yellow Fish in Lewes and Christoph Skirl at Echo Zoo in Eastbourne. The album was mixed and mastered by Stuart Rowe in The Lighterthief Bunker, Swindon – his fifth Shriekback album in this role, an indication of the value placed on his objective ear and technical skill. WEBSITE.

The second of ten tracks on the forthcoming album is 'And The Rain' a song that typifies the sheer quality to be found across the collection. Shriekback explore differing directions always with fabulous vocals and a musical set up that is sublime. Rock & Roll lovers from all points on the musical compass should give the album a listen, it's a goldmine of musical treasures from a band whose music has matured into something quite epic! 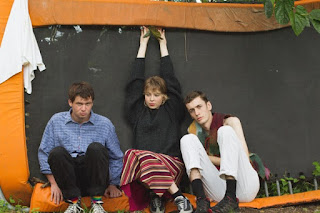 The Goon Sax - She Knows.

Background - Freshly signed to Wichita Recordings, Australian teen trio The Goon Sax announce a brand new album, We're Not Talking, due out on 14 September worldwide. They will be heading to Europe for shows at the end of May supporting Frankie Cosmos, including a date at Gorilla in Manchester on 28 May as well as their own headline show at London’s Sebright Arms on 29 May, before heading off for their first US tour in June.

They share the first single, “She Knows”, which marries sublime indiepop with frenetic, scratchy post-punk. The song is full of surprising angles and jagged sounds to create a perfectly awkward pop gem.

Taking the lead on this track is James Harrison, who explains further: "She Knows has become a very fast song, which took us a lot of practice to be able to finally hit and strum our instruments fast enough, with a lot of string breaking. I hope it makes people energetic and excited to listen to, it’s a song about losing hope, stubbornness and heartache. I’m not sure if it’s our saddest song, but maybe if you lock yourself in your room for a couple of days and only listen to it you might not feel so happy, it is also okay if you feel happy to this song! Even better!!!"

The Goon Sax are James Harrison, Louis Forster and Riley Jones from Brisbane, Australia. Still in high school when they made their first album Up To Anything in 2016, their brand of awkwardly transcendent teenage guitar pop took them into end of year lists for BBC 6Music, Billboard and Rough Trade, and earned them raves from the Guardian, Pitchfork, Spin, Uncut, Rolling Stone and elsewhere. According to Metacritic, Up To Anything was the 8th best-reviewed debut album anywhere in the world in 2016.

The Goon Sax toured UK and Europe twice on that record, played shows with Whitney, US Girls, Twerps and Teenage Fanclub, graduated school, and then turned their focus to album number two. They flew to Melbourne to record with James Cecil and Cameron Bird, respectively former/current members of Architecture In Helsinki. TWITTER.

Fresh, catchy and unpretentious 'She Knows' is a feisty indie pop/rock song that delights. The vocals and harmonies are backed by some simple yet energised rhythmic music & combined the hooks just dig right in.