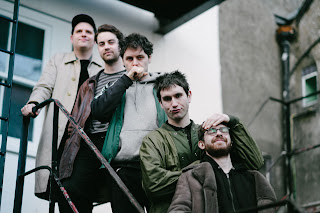 YOWL - Warm (in the Soft White Fire of Modern Living).

Background - Peckham five-piece YOWL have announced their new single 'Warm (In The Soft White Fire Of Modern Living)'. The single follows the release of YOWL's second single and video for ‘Dark Room’ and UK tour with label mates LICE including a sold out headline show at Sebright Arms. It was then on to Europe to play Pitchfork Avant-Garde and London Calling Amsterdam.

Alongside the new single, YOWL have also announced two new live dates including a headline London show at Bermondsey Social Club on 31st May 2018 and a show supporting IDLES at the Trades Club in Hebden Bridge on 1st August 2018. The full list of YOWL's forthcoming live dates is as follows:

With an EP and two singles behind them YOWL have earned some impressive critical acclaim from the likes of NME, DIY, AnOther, Loud & Quiet and more. Following the release of 2016's Before The Sleep Sets In EP YOWL released debut single 'My Headache Likes To Speak' in May 2017. Across its noir-laden four minutes, the band marry gnarled razor-wire guitars and a swaggering rhythm section with the sick croon of vocalist Gabriel Byrde. 'My Headache Likes To Speak’ was the second release from London's Big Score imprint, after recently putting out material from Bristol's LICE. The label comes from the minds behind Golden Arm who have watched over the likes of HMLTD, Goat Girl, and The Big Moon.

Nobody’s happy putting up with poor job prospects and a city pricing out the poorest, but the Peckham-formed YOWL capture a frustration of the 9-to-5 London grind like few others. And in frontman Gabriel Byrde, they have someone who can spin poetry on songs about alienation and exhaustion. YOWL are often viciously loud, but Byrde’s fanciful delivery gives them an edge. TWITTER.

'Warm (in the Soft White Fire of Modern Living)' is a laid back alt rocker where the distinct vocals are engaging from the opening moments. The band open with an air of cool slacker vibes but when they power up, they really do power up! Ellie Schmidly - Wild is the Wind.

Background - New artist Ellie Schmidly has released "Wild Is The Wind," the third single from her upcoming debut EP, Blossom & Bone. This whimsical cover is from George Cukor's 1957 film of the same name. Arranged and produced by Todd Gummerman (MuteMath), "Wild Is The Wind" captures Schmidly's crystal clear vocals over delicate strings and waves of pedal steel. "Wild Is The Wind" is available today at all digital outlets, with Blossom & Bone following on May 11.

"I first heard the song being covered by Nina Simone, in a very powerful and slow tempo with an obscure jazz piano accompanying," recalls Ellie Schmidly. "I was really taken by the lyrics – they are so expressive and unapologetically in love. I wanted the music to match the brimming-over feeling that the lyrics conjured, and I immediately ran to the Wurlitzer in hopes that I could give it a totally different feel."

Peacock was so taken with her Springfield, MO house show performance that he reached out to her the very next day to introduce himself. Peacock invited Ellie to Nashville to partake in songwriting sessions and introduced her to those in the community that could help cultivate her music. She says Charlie’s encouragement was life-changing. It turned out to be literally life-changing because she left her home, friends, family, and school in Missouri where she was studying public policy, to make the move to Nashville. After years of working on her music and continuous writing, Ellie has arrived at this seminal point when she'll unveil her debut, Blossom & Bone. WEBSITE.

It's our third feature for Ellie Schmidly in just a couple of months this time with 'Wild is the Wind'. Previously we have described her vocals as "personable and charming plus enticing and melodic" perhaps that in it's self is reason enough for sharing this track. That it is a fabulous cover of a sixty years old song with a gorgeous musical arrangement is the real purpose for featuring it! 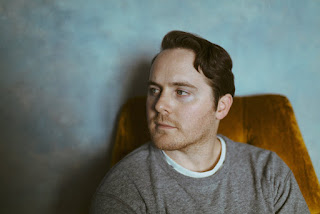 Background - Taking a page out of the Brian Wilson songbook, Wesley Jensen & the Penny Arcade deliver a glistening retro-pop tune that harkens back to the golden age of 60s baroque. "Everything" is the lead single from the upcoming EP Something New.  Both musically and lyrically complex, the track is chalk full of warm textures and orchestral layers all while sounding inherently modern.  Jensen says the track deals with themes "trying to survive in the world and what it means to find success."

Wesley Jensen was born and raised in a quaint Northern CA town, and his music often reflects this small-town upbringing, heavily inspired by the people and scenery surrounding him. After breakout record, Tales of a Wandering Man, and follow-up, Californian, Jensen’s sound has evolved from singer-songwriter into a fully formed heavyweight of indie folk-pop.

His lyrics are honest and music pure, mixing the best of new and old sounds. Infusing 60’s pop with modern production, Jensen finds a way to create something entirely unique, all while remaining true to his roots. He is a consummate story-teller, not afraid to let his guard down and address relatable ideas and imagery with charm and sincerity.

Currently residing in the artistic hub of Denton, TX, Wesley and his band have played with the likes of Deep Sea Diver and the Wild Reeds. While constantly touring in their own right, in 2017 they made their SXSW debut in Austin. The band’s musical presence continues to blossom throughout TX and beyond. Wesley Jensen & the Penny Arcade's new EP Something New will be available worldwide May 25, 2018. WEBSITE.

Vibrant, catchy, and full of timeless musical vibes 'Everything' is both nostalgic and yet fresh and uplifting. It's indie something, perhaps surf, sixties, folk or pop, lets just say it's indie brilliant.