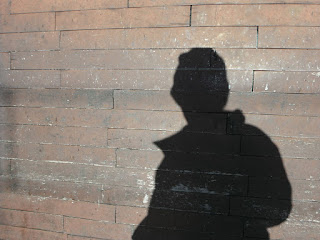 Background - There is an enigmatic bigfoot-like character that just came out of the woods after 15 years of being lost. He goes by the handle Ghostly Beard, and he’s a visionary artistic entity with a boundlessly creative sweep that encompasses soft rock, jazz, prog-rock, fusion, pop, classic rock, and more.

Ghostly Beard’s kaleidoscopic creativity has garnered him comparisons to such diverse artists as Steely Dan, Pink Floyd, James Taylor, Genesis, XTC, Cat Stevens, Weather Report, Michael Franks and Chicago. He crafts immersive dreamy sonic landscapes that emotionally blur the line between dark catharsis and subtle rays of hope. Now, he lets us into his universe with an eclectic clutch of thoughtfully sequenced EPs and albums to be released in the coming months.

Ghostly Beard will release his third and best album to date. The songs collection forms a unique blend of many influences ranging from classic rock, soft rock, progressive rock, jazz, blues and pop and is the culmination of many years spent defining his own style.

The ten-track album opens with the laid-back “How Does It Feel?” an existentialist tune that grows strong with many guitar tracks, the second track “The Love in Your Eyes” is more up tempo but bittersweet, “Gone” errs in almost Country territory with a tale from the past that grows into an anthem, followed by “Autumn Blues”, a rich blues rock instrumental. “Night Train” tells the tale of a dream with a progressive rock twist, while “Let Go” is a classic soft rock with beautiful guitar lead. “It Doesn’t Matter” which blends Jazz and Rock in a new way while “9 to 5 (Barely Alive)” is the epic of the album with many twists and turns. “Let It Rain” is the perfect chill tune for your ears and the rocking “Going Away” concludes the album with a positive tone. WEBSITE.

'Going Away' is the tenth and final track on Ghostly Beard's new 'Inward' album. The differing influences and creative mixture of genres makes it difficult to pick out any specific track as overly representative of this collection, however the featured song does provide a fine indication of the notable quality found across the album. Vocals are melodic and refined and the guitar work is of a very high standard, if you like 'Going Away' then make sure you dig a little deeper into this album, your in for something very rewarding. 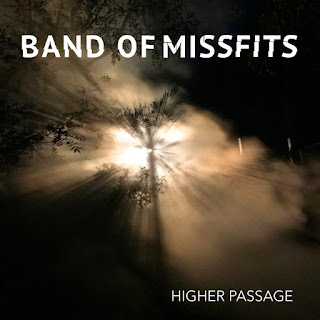 Band of Missfits - Nothing At All.

Background - Band Of Missfits invent their sound using some unshakable components. The Perth four-piece bear both the smoothness of classic rock and the fuzzier tones of grunge. They can transition from a brooding country swagger to an arena-sized crescendo in a heartbeat. Their latest single, Nothing At All, is the perfect case in point.

Taken from their electrifying EP Higher Passage, Nothing At All makes an instant and lasting impact. Everything is big: the drums, the guitars, the vocals, and especially the hooks. This is due in no small part to producer Sean Lillico (Fur Real Studio), who has done an outstanding job of capturing the band's massive live sound and on-stage energy.

Band Of Missfits have developed substantially since their last offering – 2017's Into The Storm EP. Described by one rock critic as having an 'earthy heavy ethereal feel to it', the band's sound beautifully combines acoustic and electric instruments with a powerhouse lead vocal. Taking things down a grittier path than their debut, Band Of Missfits have found more of their edge on Higher Passage, which delivers its hooks through bitter-sweet melodies.

While Higher Passage shows what Band of Missfits can do in the studio, this is first and foremost a live band. So their plan for the year is to play as many shows as possible, both at home and on the road, as they continuously work their way towards a debut full-length album. FACEBOOK.

The vocals are passionate and distinct on 'Nothing At All' and benefit greatly from the musicianship that sounds great whether the band are powering up or dipping into a more restrained reprise. Band Of Missfits deliver a hook laden rocker of a song which finishes up as something of an anthem, those who get to hear this live, will be singing along in no time! 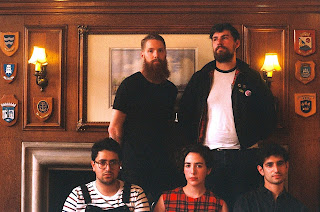 Post Louis' music has always addressed fragility. Stress Fracture pushes this interest to its logical conclusion, depicting actual damage, breakage and decomposition. Throughout the infectious track, lead vocalist Stephanie Davin toys with the parallels between physical and emotional damage – how so often they can feel the same and how they can reinforce each other. (“Mainline, please drive in my direction / Plastic wrapping for my protection / Car curl, lamppost, stretch out your veins / We might saloon our hearts in winter”).

Spikey guitar parts and contrasting male vocals appear from nowhere at different points throughout the song, creating a feeling of relentlessly being ‘on edge’. Yet more unpredictable are the wild tenor saxophone entries, courtesy of rising jazz star Alex Hitchcock.

In Stephanie’s words: “We wanted Andy’s backing vocal and Alex’s saxophone parts to tumble in out of nowhere, like a car falling off a highway. This song tracks the moment when panic sets in, temperature rises and emergency begins - when something fundamental gives way entirely, whether a bone or a belief.” WEBSITE.

'Stress Fracture' is a gorgeous and very addictive song. The vocals are simply fabulous, the band sprightly and slick, whilst retaining some natural rock and roll edge. I just love this song, it packs a whole lot of different and it works oh so beautifully !!!