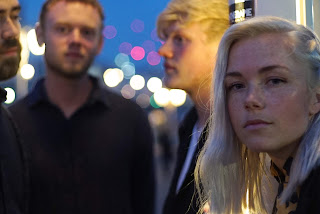 Background - The sounds of Portishead, Mitski, Beirut, Beach House, and Angel Olsen have been key to the formation of Moon Panda. After the duo of Californian songwriter Maddy Myers and Danish guitarist Gustav Moltke decided on the talents of Bristolian synth player George Godwin and London-based percussionist Alfie Webber to join them, they settled on Brighton in 2018 as their creative base to launch Moon Panda.

Their debut single ‘Rabbit’ released June 29th on boutique record label My Little Empire is an impressive introduction with dark undertones. “Rabbit is about unhealthy love.” Myers explains. “It’s someone so infatuated with their partner that they can’t end their tragic, dependent relationship.” Inspired by a character formed in Heiko Julien’s collection of wit-filled 21st century love poems ‘I’m Ready To Die A Violent Death’, Myers looks to personify the atmosphere evoked. “I wanted ‘Rabbit’ to feel quite hypnotic and have some edge. Like a predator lurking around.” The single was produced by Cameron Blackwood who has also recently worked with the likes of Florence & the Machine, The Horrors, British Sea Power, and London Grammar.

Moon Panda create a hypnotic, mellow soundscape, with lush electronic harmonies and dense drums that weave throughout and leave an instantaneous desire for more. The fragility and sensitivity felt in ‘Rabbit’ has been part and parcel of Myers’ songwriting journey throughout her life. In fact, she was sparked into first picking up a guitar at 16 after her self-confessed sweetly sheltered childhood saw its first glimpse of the real world when her treasured adolescent possessions were stolen from a broken into car. “I had a really charmed, kind, upbringing and it was the first time I’d ever really felt cruelty,” explains Myers.

With a mismatch of influences including the misunderstood maverick composer Charles Ives, the intricate, technical guitarist Erik Mongrain, and US alt-lit writer Heiko Julien, it might come as some surprise that Moon Panda create such beautifully relatable songs - but it results in a perfect balance of intrigue and understanding. WEBSITE.

The musical landscape is uncomplicated and could even be described as precise on 'Rabbit'. The vocals are alluring to say the least, and all elements combine to give a lush a distinctive sound. There are influences and comparisons to be made, these however are positive as the result is a song that seemingly begs to be heard again. 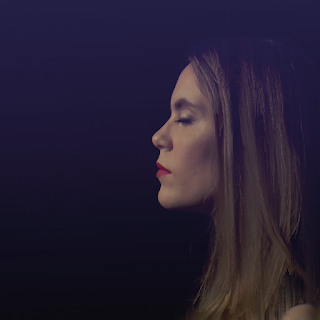 Hannah Featherstone - What's In A Name.

Background - Hannah Featherstone is Franco-British artist. Her voice glides through styles and ranges. Her piano sets a steady groove. Her music blends the catchy riffs of electro pop with the off-beat meanderings of jazz.

Born in England and raised for the most part in France, she's never been able to choose between the two countries and finds herself most at home somewhere in between. Brought up in a family of musicians, she was naturally immersed in music from the start. Her extensive experience of singing in classical and gospel choirs, but also in jazz, world music and pop ensembles, has nourished an eclectic and unique sound.

Hannah makes herself at home on any stage, in both small and large venues, fashioning her own space with a relaxed vibe that quickly spreads to the audience. As a result, every performance ends up feeling like a real heart-to-heart between her and the audience, varying in number from tens to thousands.

Her new album, Word Bound, explores both the creative and reductive power of words, using her lyrics and their musical setting to reach beyond what meets the eye. What is left when labels are stripped away?

What's in a name, opening track from album Word Bound, is both quirky and catchy. Seemingly playful, this song takes a jab at the incessant urge to label one another and the pressure to prove our worth through status. "Beyond the glitz and the glam that we feign, everyone tries to differ... Are we not one and the same?"

In collaborating with young French music producer Estienne Rylle and with established drummer David Allevard, Hannah Featherstone has developed a subtle and powerful electro backdrop for her pop-jazz harmonies. 'Word bound': a truly authentic and disarming album has just been released. WEBSITE.

Electro pop with plenty of class, is probably an understatement on 'What's In A Name' simply because of Hannah Featherstone's sublime vocals. They add a subtle jazz dimension to the song, indeed they are outstandingly melodious and combine seamlessly with the soundtrack, this one is very memorable. 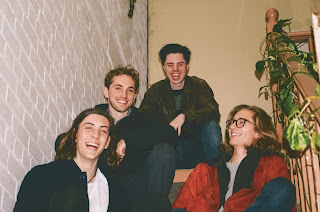 Opening to the sound of chatter and eerie synths, Idle Motion is the first single set to be launched on July 20. An infectious vocal melody and a relentless groove blend with the instrumentation, paving the way as the song displays the group’s elegance and unfiltered energy.

Engineered by Richard Lake and mixed by Steve James, the new material is as sonically textured as it is meticulously written. The delicacy of the band's nuances are captured and presented perfectly in balance with their outright intensity. Layering lavish, reverb-soaked vocals atop sophisticated beats, every track has unshakable foundations, around which the band paint texture upon texture.

'Idle Motion' opens with a post rock feel, partly due to the more sombre vocals immersed in a guitar laden surrounding. The energy and vibrancy increases, and their chosen description of alt rock becomes more fitting, as does the recognition that this is an imaginative and beautifully crafted song.