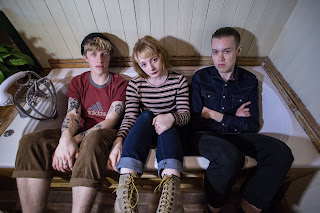 “Meat Head was written as an attack on the type of mind-sets people harbour which involve believing that they somehow own or have the right to the body of another person”, the band stated. “The song is intended to be a pointed finger, an accusation and a vexed comment aimed towards reckless attitudes that exacerbate rape culture. It’s a topic we feel strongly about, and so wanted to perform with passion and indignation”.

With drummer Robin Francis’ viciously executed pre-choruses and bassist Catherine Lindley-Neilson’s fierce vocal delivery, the subject of the song can be widely felt within the performance just as much as the lyrics, adding to the wave of momentum surrounding the trio heading into the summer months.

One of NME’s 100 Essential Acts for 2018, the Bury St. Edmunds outfit have already toured across the UK with Indoor Pets this year and will be hopping all over the festival circuit with imminent slots at Latitude (BBC Introducing) and Y Not following raucous displays at The Great Escape and Live At Leeds. WEBSITE. 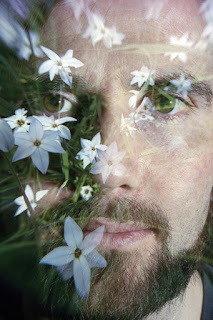 Background - "Falling" is the second single to be taken from the forthcoming debut album by Allo Darlin' drummer Mikey Collins. Hoick is due out via Fika Recordings on 17 August. The song is a bright, upbeat pop number with call and response vocals provided by Laura Kovic from Tigercats. It is about Mikey proposing to his wife, something he swore blind he'd never do.

The video was shot on a summer's day in London, bringing the track to life, adding colour and movement, featuring the dancer Dessy Adesuwa, who choregraphed the piece herself. As Mikey explains; "London always shows it's best side on a sunny day and we shot the footage in ten hours around Little Venice, Fitzroy Square and St James Park... much to the joy of many onlookers."

With Hoick, Mikey Collins combines his love of solid grooves and joyous harmonies to create a fun and sonically varied record. Mikey played most of the instruments and mixed the record himself, with some assistance from Laura Kovic (Tigercats) on vocals and fellow Allo Darlin' member Paul Rains on lead guitar. The flicker of his previous band provided the building blocks of an upbeat, positive record, but Mikey wanted to add his own quirky, disco spin & sonic expansiveness, aided by co-producer John Winfield (who has worked with Jimmy Somerville), with the aim of making a record that people stood a chance of being able to dance to. To create this eclectic sound, Mikey draws on influences are as far flung as Dexy's Midnight Runners, Bruce Springsteen & Todd Rundgren as well as more current artists such as Night Works, Matthew E White and Father John

It was a real pleasure to share the first single from Mikey Collins and the second one 'Falling' is equally special and pleasing to feature. Once again we are treated to some refined pop sensibilities, the smooth delivery and upbeat lilt, is taken up a further notch by the dual harmonies, and the video really is "the icing on the cake." 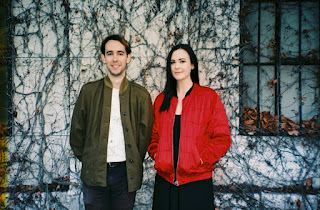 Background - LA-based, post-punk band Polyplastic have released their new EP, Not No. Polyplastic is the project of Los Angeles natives Charlie Ellis and Emily Ibarra.

Inspired by his time as a welder in North Philadelphia, Ellis’s songwriting is influenced by industrial and post-punk genres, marrying lyrical melodies with angular guitar lines and a driving rhythm section.

With a few bare-bones demos, the band started playing shows in LA and touring the US, supporting acts such as Wolf Alice, Ryley Walker, Draemings, and Tennis System. Polyplastic have released a few one off singles over the past few months, leading up to the release of their EP, Not No, due out June 29th. The band will be touring nationally, in support of the EP. TWITTER.

The single from Polyplastic's brand new EP 'Not No' is 'Next Slide' which exclusively includes 'Memphian Circles' as the B side. The band develop intriguing post punk orientated music where the vocals are just right for the genre adding depth and passion, whilst the musical backdrop is solid and robust.