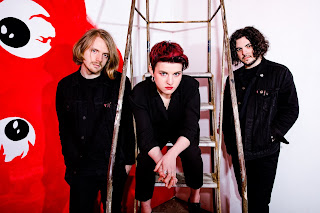 Background - With an angular opening riff that batters its way into your head and stays rattling around in there all day, Rare is the ferocious new offering from Leeds art-rock trio Dead Naked Hippies. Don't be fooled by the initial ferocity, Rare serves to empower others and front woman Lucy Jowett is not holding back:

“It is a song about self love. I think we're quick to judge the term & deem it laughable or irrelevant in fear of being arrogant, or weird. But if you take a hard look at the society we live in, it's clear to see why so many people struggle to feel content in their own minds and their own bodies. I've always struggled with myself and it sickens me to think that so many other people feel the same. It needs to change.”

Expanding more on the band’s mission, and where latest release Rare fits in – Lucy says: “We're used by advertising companies, so they can make money out of our discontentment. Bombarded with images of fake realities, only to make us feel like ours isn't enough. We're made to feel like our creativity and passion will never be as important as serving a functional purpose in society. It's dull, boring and I'm ..king mad about it. Most importantly, I want people to know that they're not alone.”

By creating a vehicle, alongside band mates Joe Clarke (guitar) and Jacob Marston (drums), through which Lucy can express and tackle her own internal issues, Dead Naked Hippies offer a space for others to do the same. Rare is a cathartic rallying call in the form of pounding drums, guttural guitars and righteous vocals. TWITTER.

Following on from the song 'Guillotine' which was our first taste of Dead Naked Hippies back in June we now have the chunky and somewhat rambunctious follow up track 'Rare'. A loud alt rocker that takes no prisoners, it's hard to ignore and easy to embrace. 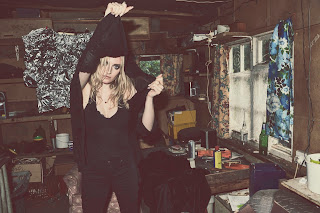 Hero Fisher - If I Die and Nothing Happens - (Warning - Flash Video).

Background - With it’s heavy dub bass and raw distorted vocals, the sound of ‘If I Die And Nothing Happens’ belies Hero’s playful lyricism. The dark spectral soundscape she builds evokes a deep volcanic winter as her ambient instrumentation facilitates the telling of a fundamentally human story. Hero’s lyrical quest for light also serves as an affirmation of life, and a recognition of the beauty around us. Moreover, it showcases Hero’s unique dynamism as a songwriter.

There are light moments within the dark, as in her canny layered vocals and the sublime motorik outro. The glacial production style shines with the same vitality that Hero has carried through all her work. Ultimately, ’If I Die And Nothing Happens’ is a heady reminder of the heights of alternative music and its limitless potential to tell new stories and explore new ideas. Hero’s influences are vast, but she distils them into a sound that feels both effortless and rare.

By turns a blistering rock and roller in the vein of Patti Smith and PJ Harvey, and an experimental folk storyteller à la Jeff Buckley, Hero Fisher resists easy generic categorisation with her protean and cinematic musical storytelling. Able to expertly strike a variety of different narrative poses, she is at once the spurned lover and the fired-up rabble rouser, predator and prey. With Glue Moon previous singles ‘Sylvie’, ‘Push The Boat Out’, ‘I Let Love’ and ‘Lonely’ Hero’s lyrical imagination proved unique and bountiful. ‘If I Die And Nothing Happens’ takes her sound into unchartered territory. It’s a testament to her resplendent artistry, and a display of her limitless potential to find new sonic avenues. WEBSITE.

'If I Die and Nothing Happens' is our fourth feature for Hero Fisher who continues to impress with her imaginative and intriguing music. There are some clever melodic hooks that contrast well with the dub bass and ambient backdrop, and Hero Fisher's vocals once again are just so engaging, that it leaves me simply wanting to hear more. 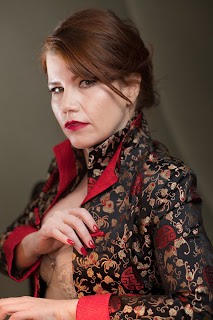 Background - London-based Irish-born songstress Linda Em presents her new single 'Two Hands' ahead of her ‘London Irish’ EP, to be released on September 21 via Talking Elephant Records. This new single comes on the trail of her blazing ‘Wild Fire’, a sultry earworm of an EP teaser.

This EP is the first step in a different direction for Linda, towards a more atmospheric and spacious sound and vocal performance. It is both poetic and storytelling while still being brutally honest and personal. Her pure and raw vocals beautifully convey a nostalgic lyrical narrative, her warm endearing vocals drawing the listener into her musical story telling.

‘Two Hands’ is about seeking a safe, quiet space in which to gather strength when the trials of your everyday life feel overwhelming. Linda Em co-wrote this song with Ian Montague.

“There was a particular point in my life where I felt very alone just been kicked out of college and my mum and brother were both in hospital. I was the main caregiver. I went into the church at the end of the road and sat asking for something (I didn’t know what). You light a candle and expect god to be at the end of the bed that very night. I used to search for churches in-between the madness” is me reflecting on those moments. When we cannot fix something, we always try to go to a higher place for help and as a young person whose family was not “normal”, I looked for that more often,” says Linda Em.

“As we grow and work on self, we realise that the higher powers we are seeking are not some greater godlike figure but something within ourselves, even if it’s just simple acceptance. That’s why the end of the song refers to that “bitter sweet surrender” of letting go and letting go of ego “humiliate me slowly” of being willingly open to vulnerability and letting go of pride. And also of being reborn spiritually “open me unholy again and again“, each able to become our own superhero.” WEBSITE.

We featured 'Wild Fire' back in the middle of July and the second single from the 'London Irish' E.P. due later this month is 'Two Hands'. It's another gorgeous modern folk song where Linda Em's vocals are so full of emotion and personal feeling. The musical arrangement is sublime giving even more passion to this truly beautiful song.