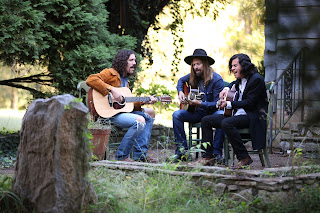 High South - Change In The Wind.

Nashville’s High South dropped their Change in the Wind EP this past Friday. With impressive three-part harmonies (courtesy of vocalists Kevin Campos, Jamey Garner and Phoenix Mendoza), a dedication to songwriting and unwavering optimism, the Nashville-based band High South has developed a dedicated following across Europe, where they’ve been touring regularly since 2015.

Now they’re breaking into the American market with Change in the Wind, a captivating project that draws comparisons CSNY, Doobie Brothers and The Band.

High South may draw some notable comparisons with the likes of CSNY and others however this is not without merit. The E.P. 'Change In The Wind' exudes quality, whether it's the vocals and refined three part harmonies, or the musical arrangements that subtly add so much more. Timeless and classy, this is one of those beautiful collections of music to immerse yourself in. 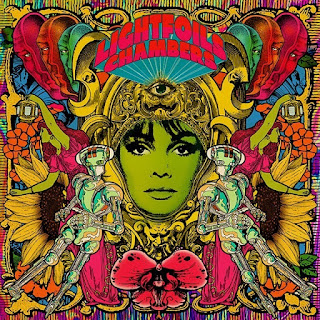 Lightfoils - This Time Is Up.

“This Time Is Up” is the euphoric second single that Chicago’s shoegaze band Lightfoils is sharing ahead of the release of their new album Chambers that’s coming out in a few weeks on 11/16.

“This Time Is Up” pairs frenetic beats with woozy guitars and rattling bass, outlining the breakup of a relationship with a dishonest partner. Anger is the main emotion, until the coda shifts to a slower denouement regarding things not said, or better left unsaid. The enthralling track follows the album’s first single “Summer Nights” (buy/stream), a densely layered, reverb-laden track with a calculated build-up. Formed in 2010, Lightfoils’ sound subtly stretches the auditory boundaries of shoegaze, honing in on a more cosmopolitan and ethereal sound.

Chambers is Lightfoils’ first album since 2014, and represents a band that has mastered the atmospheric tone they've become synonymous with and continue to occupy, almost a decade after formation. Songs like “Duende” sound like a surf rock wave rolling onto darker shores, with the rhythm section keeping an upbeat tempo, keeping one grounded, while the vocals and guitars provide a loss of gravitational control. Frontwoman Jane Zabeth Nicholson’s sublime vocal melodies and the bands’ subsequent sound are reminiscent of classic 90s indie rock that has a touch of grunge, and channels the softness of their shoegaze predecessors. WEBSITE.

We featured Lightfoils last month describing their material as "a combination of atmospheric shoegaze and lush dream pop". Now we have the second single 'This Time Is Up' a powerful and driving song where the music is intense and the vocals slower and melodic, it's an intriguing combination and it works. 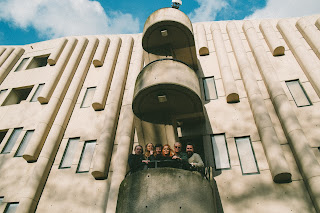 Building on the hype surrounding debut release Mother earlier this year, Leeds sextet Talkboy share their second shimmering offering Over And Under.

With momentum growing outside of their native Yorkshire following accomplished displays on the festival circuit and support slots alongside Our Girl and Bully, the six-piece look well-placed heading into a promising 2019 with two singles down and plenty new material to come.

Discussing Over And Under, guitarist Tim Malkin stated: It’s no secret that we all like a good party in Talkboy but personally, I increasingly get the feeling that I should be having way more fun than I am or that I should be way closer to the people around me than I am. I think that a lot of people go through the motions at social gatherings, to try and keep up appearances or whatever, whereas if they just let go of that kind of stuff they might have more meaningful relationships”. TWITTER.

Talkboy impressed us back in June and the new song 'Over & Under' is another feisty rocker, where momentum and power are superbly matched by some imaginative and addictive two part vocals. 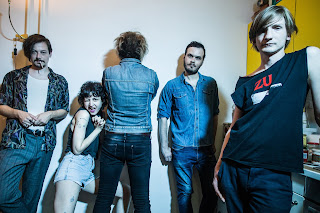 The world the multiverse, if you will is eternal. The moment we call “here and now”is but a glimmer on the ocean of endless returns of this exact moment -and also returns of all imaginable and non-imaginable variations of this moment. There is no time as we normally think of it (as a linear movement), the billions of years that pass, they only seem to pass in our quotidian ignorant slumbers. The multiverse brings forever back this day and brings forth days in which in place of my right arm the Holy Trinity shines and I am quoting Spenser's unwritten sequel to the Faerie Queen. Our lives as we experience it are one thread of this fabric, the painted veil, the kaleidoscope -the circles, cycles, or, rather the spirals, the gyres stretch endlessly.A concert favourite of ours, we recorded the song during the summer.I wrote the lyrics after reading The Life of Milarepa.

Gustave Tiger are a Hungarian art punk band formed in 2013. Starting off as a power trio on their first EP, Mitanni Mares (2013), they were quickly joined by the brilliant lead singer Erika Szurcsik for the first LP, At The Idyll’s  End (2014). After touring with the album in Europe and an appearance at SXSW 2015, the band released their second album, Chaste and Mystic Tribadry in 2016. This year, the band released the Video single New Light of  Myanmar, which is a step towards the world of synthesized sound as well as a political statement against nation states.The band’s releases received outstanding reviews locally (best Hungarian album of 2014 and 2016 on  leading  portal  index.hu) and internationally, earning their song Sister Sybaritea feature on the Rough Trade compilation Counter Culture 15 in 2015, as well as radio airplay for the song Thermidor on BBC Radio 1 Scotland in  2017.

They were also invited to European festivals like Noordanpaunkin Iceland, FAMA  Film Festival in Swinoujscie Poland, MENT Showcase Festival in Ljubljana, amongst others. In  contrast to the ambitious production of the  studio recordings and the peculiar aesthetics of the music videos, the live shows are renowned for the immediacy and fire that brings punk t  life. Gustave Tiger has so far toured Europe (appearing in Reykjavik, Laugarbakki, London, Manchester, Liverpool, Berlin, Prague, Vienna, Krakow and Warsaw as well as touring the Balkans) and started operations in the US (Los Angeles, San Antonio and Austin at the SXSW festival). Their new album will be released in early 2019. FACEBOOK.

'The Eternal Return' blasts into life as a full on punk rocker with such energy that it's no surprise the band insert a couple of melodic refrains in, otherwise the drummer particularly might suffer from exhaustion before the closing chords.

Astari Nite is proud to show to the world their video for the song “Unfulfilled Promise." The track is included in the band’s most recent album and produced by Tom Shear (Assemblage 23). The video itself is fraught with meaning, reflecting the lyrics of the song that cover among others, depression and loneliness.

The video, directed by Ileana Escalante & Louis Molden of Blind Beast, features Astari Nite’s trademark aesthetic, haunting and melancholic, blended with surrealistic scenarios that tap into the psyche of someone who is confronting their demons, and dealing with the aftermath of loss and death.

"Sadness and depression comes in many shades and colors. If you can see it, stop and take the time to help. Smiling at someone, or a simple hello, can save a life." –Mychael.

The video, and the message it contains, comes at a time when the social spotlight is on the topics of depression and suicide, with several beloved musicians and iconic performers having taken their own lives in the last couple of years, it brings to light how many of the people we know and love in our daily lives deal with the despair that drives one to become destructive. Too often do we become aware after it is too late, after they are gone. TWITTER.

It's been a while since we featured Astari Nite, however 'Unfulfilled Promise' is not only a gorgeous and atmospheric song, it also carries a message worthy of consideration. The video captures the mood, as their mesmerising post punk with hints of Gothic music digs it's hooks in deep. 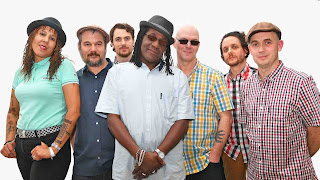 Ska royalty Neville and Sugary Staple are have announced 'Way of Life' as the second single off their new 'Rude Rebels' LP. Released via Cleopatra Records, the album is now available on CD, as well as special clear vinyl with black and white splatter. This record comes in time for celebrations for the 40th Anniversary of 2Tone Records.

‘Rude Rebels’ is full of original upbeat music with vocal statements on life, fashion, love and morals, plus some smooth reggae vibes. It features brand new songs and recordings from Neville Staple, legendary singer and toaster of The Specials and co-founder of Fun Boy Three, and his partner-in-crime Sugary Staple, as well as former Specials' guitarist Roddy Radiation (a.k.a. Roddy Byers).

'Way of Life' features both Roddy Radiation and Ryu Every from Barbdwire. The original video was filmed by Tony Moore / Shelampsee Entertainment and the main feature video, animation & sync were performed by Steve Bowden.

With 2019 being the 40th Anniversary of The Specials and 2Tone Records, this is a timely release. This album follows Sugary Staple’s sold out 'Rudegirl Sounds’ EP and Neville Staple’s ‘Return of Judge Roughneck’ double album, also released via Cleopatra Records.

The Staples are a permanent fixture of the widely regarded and enormously active ska scene in the UK, performing regularly at both clubs and massive festivals. In the Neville Staple Band, who have been actively touring both at home and abroad, Sugary joins Neville Staple to front the band.

Sugary and Neville wrote and produced this rebel-lishious offering, alongside Tom Lowry (The Specials, Neville Staple, Spectrum) at Planet Studios in Coventry, which brings a super blend of punked up anthems, dancehall ska and sweet rebel reggae and bluebeat. BANDCAMP.

Described as Ska royalty Neville and Sugary Staple can hopefully live with that expression, it's not out of place as is demonstrated by 'Way of Life'. With 2Tone Records heading for their 40th anniversary I don't know whether to feel old or just feel pleased that music this good is still be produced and performed. 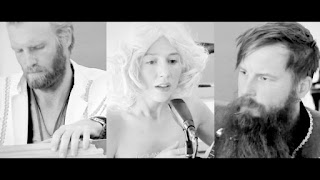 The Great Escape - All You Got Is Gold (Live And Acoustic In Venice Beach).

When you do the diggin' sometimes you just strike that "pay dirt", that rich vein, that golden, magical moment: LA's The Great Escape clearly knocked it out of the park with album's standout cut "All You Got Is Gold"- as it captures everything that makes this band so special.  Hearfealt, touching, and breathtakingly beautiful tune, Ingrid Andersson's powerful voice really shines over the epic arrangement her band-mates Kristian Nord and Malte Hagemeister came up with.

A bonus treat is their stunningly sparse "Live & Acoustic in Venice Beach" version- the stripped down tune is certainly "goose bump material", crisply recorded in one golden take, one golden moment in Venice, CA.

Widely praised for their genre-smashing approach to song craft, The Great Escape is a three-piece band from Venice, CA, comprised of Kristian Nord (drums, bass, production), Malte Hagemeister (guitars, production), and Ingrid Andersson (vocals).  The band's second full-length "Universe In Bloom", released in 2017, saw them take the raw energy and stomping confidence of their self-titled debut to the next level with massive hooks and catchy tunes beyond genre that could have been recorded at any point in the last 50 years.

The band's eponymous, self-produced debut album came out in 2014 and received much critical acclaim. They are currently working on their third full-length, forthcoming in 2019.  The trio's latest single "All You Got Is Gold" is now available via all streaming-download partners. WEBSITE.

'All You Got Is Gold' Live And Acoustic In Venice Beach is a fabulous version of the song and news of a third album should have plenty of folk pleased.