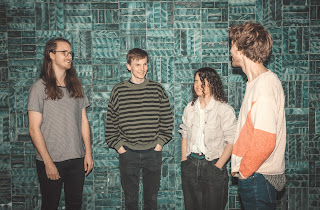 Since debuting with catchy single Human early 2016 things have moved steady for Stockholm psych pop act Melby. Last year's debut EP received praise from both Swedish and international sources, making Melby one of the most exciting names on the Swedish indie scene. The band returned with Reject just before the summer, a summer which then saw tour dates in London and Berlin, as well as working on their upcoming debut album. New single Overthinking is yet another piece to the exciting puzzle that is Melby's music and another step in what is forming to be one very promising career. The new cut is out today via Stockholm label Rama Lama Records.

The band often gets comparison to fellow swedes Dungen and Amason but Melby’s dynamic sound, with influences from folk, psych, indie and pop, stand out. The quartets light, semi-psychedelic folk pop is led by Matilda Wiezell’s enchanting voice which fits perfectly with Melby’s unique musical landscape - a sound that's been called "otherworldly, and wholly brilliant" by The Line of Best Fit. The band consists of Wiezell, Are Engen Steinsholm (back-up vocals, guitar), David Jehrlander (bass) and Teo Jernkvist (drums) and formed while living together in a Stockholm shared housing.

Overthinking, the second single released this year, is just as its precursor Reject, a development of the band's already characteristic sound. This time, the band reflects a inner conflict, all leading up to the synth-driven chorus which just happens to be the perfect settings for your daydreams. Are, guitarist and author of the song, explains:

"It’s a really cute song, so cute that it almost feels a bit embarrassing to talk about the lyrics. However, they are basically a declaration of love to a person who is very important to me. But I also ended up writing nearly as much about myself. About my own mixture of hubris and bad self esteem, and that I have a hard time feeling sure about anything at all. Musically it’s probably also the cutest song we’ve ever made. I feel that the verses have a tiny bit of melancholy to them, but the choruses are just entirely cosy and warm."

The single is the second taste of the new, fresh material that the quartet's been working on since releasing their ambitious EP last year. A debut album is in the final stages and will be released next year. Overthinking is released October 30th on all platforms via Stockholm label Rama Lama Records (Steve Buscemi's Dreamy Eyes, Kluster, Chez Ali etc.). BANDCAMP.

We have featured Melby just once before back at the beginning of June with the song 'Reject' describing that track as "a fine indie song where psych vibes comfortably rub shoulders with moments of pop and folk rock". Now we have 'Overthinking' which really is another impressive piece where the rhythm is sprightly whilst the melodic vocals are slower. The combination works so well, this is catchy, original and quite lovable. 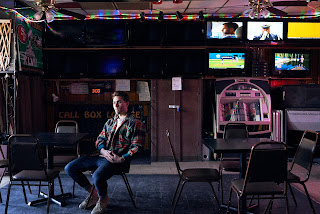 Hailing from Brooklyn, Connecticut (not to be confused with Brooklyn, New York), Jonathan Something is the musical project of writer, producer and multi-instrumentalist, Jon Searles. His first single 'Outlandish Poetica' (released in May of this year) was a rather cheery depiction of a surreal nightmare in which Boston Celtics legend Larry Bird and the 86' All Star basketball team inexplicably ambush Jonathan Something, brutally beating him and robbing him of his money.

His second single 'Fine' demonstrates the genius in Jonathan Something's songwriting and, more specifically, his use of contrast and differentiation when it comes to surface and substance. On first listen, 'Fine' is classically reminiscent of upbeat, feel-good and catchy Van Morrison, Buddy Holly and even The Band. Lasting only 1:57 in length, the chorus is simple and addictive with a strong feeling of warmth and familiarity.

The most astounding part of the Searles' songwriting occurs when you contrast the shiny and memorable surface of the track against the sincerity and seriousness of the lyrics. While on the verge of panic, Searles contemplates his purpose and meaning after finishing school: He doesn't just want to become another "extraordinary asshole with a bachelor's degree". Searles draws attention to our ability as humans to keep fear, anxiety and existential angst well hidden behind shiny bravado, not only from those closest to us, but from the world at large.

His incredible third single 'Happy Day' is also part of his debut album Outlandish Poetica. Much like the previous single and the album at large, 'Happy Day' is a song of alluring disparity. On the one hand, is the bright and shiny surface: The self-assured bravado of the guitar, the unwavering conviction of the drums and the certainty of a relentlessly hammering piano. And it's misleading. On purpose. Because it's intended to contrast and elevate the significance of what's really going. That over time, JS' believes his confidence will inevitably dissolve. And what you begin to hear is the fear that at any moment, despite how bright and shiny things may appear, he could slip into an unexplained and unannounced sadness. JS' intention is to highlight that depression, anxiety and mental disorders at large are not something that can be resolved once and never return. They recur. Often and unexpectedly. Mental health ebbs and flows. There are hills and valleys. And it's his beautiful, honest songwriting that is his means of conveyance. The new album is due in November. BANDCAMP.

We featured Jonathan Something's first single (Outlandish Poetica) back in May and ahead of his imminent new album release thought we would play catch up and share the other two singles 'Fine' and 'Happy Day' (that and the fact we received the album plus instrumental versions, and kinda thought we ought to).

Seriously though, Jonathon Something has the knack for creating vibrant, story telling songs that both intrigue, resonate mentally and charm. There is never a dull moment across all nine tracks, the musical arrangements are clear, pristine and whilst the lyrics are engaging and thought provoking enough in their own right, the musical hooks are in constant flow.