May 08, 2019
'Easy As You Care' by Paul Doffing is a beautiful example of how much singer-songwriters still have to offer in terms of creativity and emotional feeling, this really does suggest that his fourth album release is something to anticipate.

We've featured a couple of songs from Trudy and The Romance's debut 'Sandman' album due out later this month and 'That's Not Me' sees the band slow things down a little without losing any of their 50's Mutant Pop sparkle.

Back in 2017 we had the pleasure of featuring a few songs from Jade Jackson and her highly acclaimed 'Gilded' album. 'Bottle It Up' is the first of twelve songs on her second album 'Wilderness' scheduled for release on June 28th, and I have to say each and every track is on a par with the featured piece at the very least. Fans of the first album should love this and personally I think she will add a good few more of them when the new collection hit's the ground! 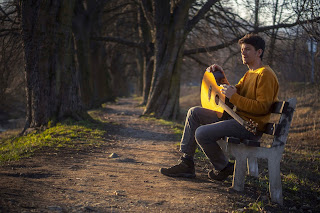 Paul Doffing - Easy As You Come.

Amidst the speed and uncertainty of modern life, Paul Doffing’s Running in the Dark calls for reflection on the forces that blind our vision and limit our happiness. Doffing’s fourth full-length release, Running in the Dark, is a 36-minute musical odyssey of self-exploration, human connection, and worldly realization.

Doffing, an American singer-songwriter and environmental advocate, explains, “My highest hope is that it is music that touches the listener’s heart. That it takes them somewhere and helps them feel something that maybe they forgot about, or even feel something they didn’t know about.” Doffing’s tone and delivery throughout the guitar-focused Running in the Dark carry a freshness that pushes the release toward the leading edge of the expansive songwriting tradition from which it originates. A notable evolution from Doffing’s previous efforts, Running in the Dark carries broader instrumentation with more focus on bass and percussion; palpably informed by the work of numerous songwriting giants from Leonard Cohen to Patrick Watson throughout.

With both the man and his music rich in sincerity and substance, Running in the Dark is abundant in meaning and sentiment. Doffing, who has considered music a companion since his early youth, has completed nearly 13,000 miles touring on bicycle through 22 U.S. states and 7 countries performing concerts along the way. Paul’s vast pedaled wanderings – paired with two years exploring Central America and Europe, guitar in hand– have culminated in the purposefully layered album that is Running in the Dark, which was written over a six-year span.

Doffing conveys, “There were times when I was making the album where I knew what I was trying to do and some when I didn’t, but I went to each thing that felt like it needed to be there and expanded upon it until it came alive.” Doffing allowed his intuition to lead the way in both the creation and subject matter of the album. Doffing delves into a wide array of themes on Running in the Dark, ranging from the delicate nature of emotion, to bountiful love and the contrasting deterioration of it, and the complex understanding of personal development through human connection. 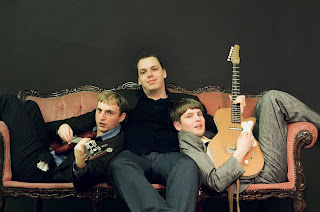 Trudy and the Romance - That's Not Me.

Trudy and the Romance unveil new single ‘That’s Not Me’, the final teaser trailer ahead of fast-approaching debut album ‘Sandman’, out May 24th.

The track follows retro stomper ‘Doghouse’ around which Noisey profiled the trio as part of their hyped Hitlist series, proclaiming “from happiness to heartbreak, and all the way back again, each of Trudy & The Romance’s songs feels like a Richard Curtis vignette”. Collecting these colourful scenes together is their imminent and eagerly-anticipated debut feature-length, ‘Sandman’, which is out next month, full track listing revealed below.

Vintage ruminations on heartbreak accompanied by swooning backing vocals that play off of Olly Taylor’s arresting vibrato, ‘That’s Not Me’ is a fine example of the trio’s interstellar time-machine tunes. Excellently distilling their flair for dreamboat-pop with nods to Jonathan Richman, Louis Prima, and Brian Wilson’s wall of sound, it also takes influence from film composers Henry Mancini and Bernard Herrmann, and the golden age of Disney.

In celebration of the LP release the three-piece will be treading the boards at London’s Oslo venue, as part of a wobbly-kneed lap of honour tour through May. Their exhilarating live show ranges from hip-swinging rock’n’roll to show-stopping ballads, all delivered with a rag-tag punk ethos – garnering stateside approval with acclaimed sets at this year’s SXSW.

Recorded with producer David Pye (Wild Beasts), ‘Sandman’ draws the listener further into the trio’s vibrant world, and follows the latest escapades of central protagonist little Johnny and his inner turmoil. Rocking and reeling through dreamy harmonies and dazzling guitars it’s everything good pop music should be – catchy, clever and brimming with curiously wonderful characters in Trudy’s inimitable realistic-cartoon narrative. 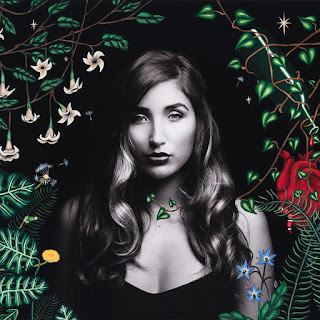 Jade Jackson - Bottle It Up.

On Jade Jackson’s second full-length album, Wilderness, she casts a light more focused on her own life than ever before. To be released on June 28th via ANTI- Records, Wilderness – like her debut record Gilded - was produced by Mike Ness, the SoCal punk rock legend has carefully helped her hone her craft and sound. “I don’t need a man’s hands to open the jar,” Jackson quips on the charming first single, “Bottle It Up”. Watch Jade and her love interest traverse the deserts of Joshua Tree in the song’s new video.

Gilded (2017) was a masterful, critically acclaimed introduction to her strong soulful stylings as told through the eyes of characters and storytelling, with Jackson keeping any hyper-personal glimpses at arm’s length. But for its follow-up, the singer-songwriter from the Central Coast of California decided to embrace the concept of building her songs from an autobiographical perspective.

Two days after her 20th birthday Jackson was hiking in nearby Sand Canyon when she leaped from a rope swing and fell 15 feet onto a rock – she sustained serious injuries and wasn’t sure if she’d be able to walk again. As she recovered, she realized she was depending more and more on prescription painkillers and after stopping cold turkey by destroying her prescription refills and flushing the remaining pills, her body and brain spiraled into depression. She also developed a control-related eating disorder that would haunt her for several years following. Jackson refers to her mind state during that time as “suicidal.”

“Needless to say, for the first time since I had written my very first song, I didn’t believe in my music anymore,” Jackson says. “Because of my depression I didn’t like myself, so I couldn’t possibly imagine someone else liking what I created. But even that couldn’t stop me from writing, and songwriting remained my therapy through it all.”

The theme of her new work deals heavily with those attitudes and feelings while focusing largely on other true encounters and relationships in her real life. Wilderness is a powerhouse of a record about the in-betweens and stepping stones we dwell in and leap across while coming to terms with our senses of self, and how melancholy can be a powerful weapon to wield—especially in the form of a roots-rock or country song. With Wilderness, Jade Jackson has braved the depths of her soul and figured out a course for survival—though she will be the first to admit that her journey still has miles to go.

“Wilderness as the title of my album is this in-between area I’m in right now as a musician. It’s the unknown—like when we’re touring, you don’t know where you’re gonna play, or sleep, what you’re gonna eat, if you’ll have monitors…there’s so much unknown at this grinding stage in the game. I am incredibly thankful for the way my career has started, but I’ve always had this urge propelling me forward. I know where I want to go—I can visualize it—but right now I’m walking through the wild, still picking up tools, still learning, and making my way.”