June 15, 2019
From Sydney, Australia we have Dive Bell and a video for the song 'Lupine', a rich and unique sounding track where somewhat ethereal vocals are joined by a disparate musical arrangement yet they work beautifully together.

The Goa Express have shared 'The Day' an energised indie rocker where the vocals are enthused and the band tight and feisty.

It's our third feature for Honey Moon as once again the London jangle pop outfit impress us, this time with 'Magic' a timeless pop piece that is rammed full of hooks.

Oh, Rose new album 'While My Father Sleep' opens with '25, Alive' accompanied with a video, the song is a loose rocker, Rose's vocals ebb and flow with charm and feeling, it's a fine teaser for what's to follow. 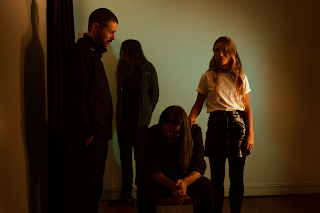 Sydney’s Dive Bell exhibit their mysterious, divergent sound with ‘Lupine’, their cut through first release of 2019.

Shaping a truly vast and cinematic soundscape with their blend of alt-rock, electronica and trip-hop, ‘Lupine’ sees haunting harmonies effervesce around brutal guitar tones and shimmering synth lines. Initially striking with its raw digital crunch, this dissolves effortlessly to reveal a lush final quarter full of bright optimistic tones. “I was inspired by a doco I watched which delved deep into the territorial nature of wolves. It raised themes around belonging and entrapment, freedom and repression - which I explore lyrically in the track,” singer/keyboardist Aleesha Dibbs explains.

Voyaging to the wolves' nomadic habitat, the music video adds to the wonder, catapulting viewers into a seemingly ethereal world. Far from civilisation and shot on location in the Snowy Mountains, the clip sees Aleesha running amongst the wild. ”It involved the most intense cold I’ve ever experienced, a substantial amount of time on the freeway and a real-life 'Man from Snowy River,'” she jokes.

Having shared the stage with the likes of as Jonti, VOWWS, Body Type, Party Dozen, Lucianblomkamp, VOWWS, 100, Exhibitionist and A Swayze & The Ghosts, four-piece DIVE BELL have captivated audiences from all across the musical spectrum. Cementing themselves in both the local and national scene, their previous singles have seen support from the likes of FBi Radio and Rage. 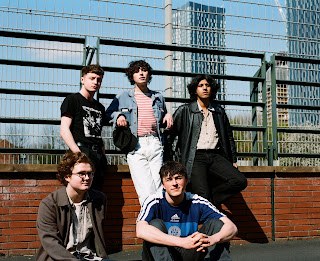 The Goa Express - The Day.

The Goa Express release their urgent new single 'The Day' on Friday the  5th of July. Recorded at Champ Zone with Nathan Saoudi (Fat White Family), it rattles with an unstoppable new wave rhythm, shudders with abrasive guitars and with vocals that sneer with the spirit of seizing the day while everything is falling apart around you, their sound may rustle with the ghosts of acts like The Stooges,  Psychedelic Furs and contemporaries like Shame, but the Goa Express possesses youthful energy, northern spite and ever-evolving sound all of their own.  The band's frontman James Douglas Clarke says ‘The new tracks are about moving out to university and getting caught for doing shit whilst there and also about the fake, social media platform of our society, lick arses and how everybody wants to pretend that they’re friends.’

Teenagehood, brotherhood and a love for an array of alternative music, across the years, has closely united Burnley and Todmorden's, The Goa Express. Although the intensity of their friendship has resulted in the occasional bust-up, along the way, it is outweighed by their chemistry, which the band offers collectively both on stage and on record. Together, James Douglas Clarke (Guitar + Vocals), Joe Clarke (Keys), Joey Stein (Lead Guitar), Naham Muzaffar (Bass) and Sam Launder (Drums), each contribute to a fuzzy wall of diverse sounds that become hard to pin down with their ever-changing, experimental sound.

Since coming to Manchester, The Goa Express have enjoyed support slots with international bands like The Murlocs, Moon Duo and Mystic Braves as well as performing live with domestic indie champions such as Cabbage, YAK and The Orielles. Whilst at university, The Goa Express have played headline shows at both Manchester's Band On The Wall and The Castle Hotel, as well as slots at Liverpool Psych Festival and the Leeds based, Karma festival. Their live sets are raw, and with expressive, outspoken mindsets, the band transform the hyper- communication and speed of modern life through hard-hitting, relatable lyrics. 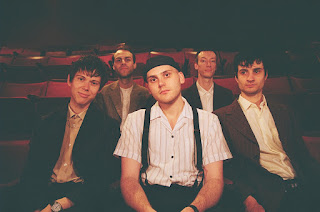 To put the track out they’re once again teaming up with Manchester label Heist or Hit  (Her’s, Pizzagirl, Baywaves, Guest Singer), with whom they released last year’s acclaimed Four More From… EP, enchanting taste makers as well as BBC 6 Music and legendary crate digger Elton John.

“We wanted to explore the illusionary theme, to try and make something expansive and cinematic-sounding. 'Magic' represents the soul-mate style love we see in film, literature, Honey Moon songs - everywhere! What can seem like the most mundane, everyday elements of companionship are often the most important and overlooked. This sort of souped-up version of having 'one true love' is, whilst a nice idea, pretty difficult to imagine as anything that's realistically achievable, but there's something very real in the sentiment, and that's the ‘spell’, that's the illusion.” 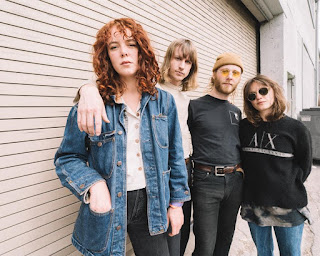 While My Father Sleeps by the Olympia, Washington based band Oh, Rose tells the complex story of family, adversity, love, and friendship. In ten songs, the record bears the soul and shares the truths of the band’s front-person and creative driver, Olivia Rose, while also serving as a homage to Rose’s mother, who passed away in January of 2017. It is Rose’s life story, told under the banner of a story her mother was never able to finish.

“While My Father Sleeps is the title of the book my mother wrote throughout her life,” Rose says. “It involved her relationship with my grandfather, the way she could communicate with him through the poetry of Carl Sandburg and the writings of Truman Capote. Her storytelling always inspired me to tell my own through music. The album title and artwork serves as a bookend, the songs written between two moments. The front cover shows my mother reading to my brother and me outside the North Asheville library in the summer of 1995, the back is her headstone. Though I didn’t write these songs in a state of grief, I came to know this album while I was grieving. When my mother died, I learned a new language, the language of death. At the same time, I was continuing to build strength and love within my community; my story isn’t uncommon. I hope my music finds a home with those who speak these same languages.”

Soon after arriving in Olympia, Rose met the friends and musicians who would become her community and extended family. Formed in 2014, the band built its foundations by playing DIY house shows and contributing to Olympia’s long-standing punk and art scene. A play on Rose’s own name, Oh, Rose recorded and self-released their first EP, That Do Now See in 2014 followed by a mini album the following year titled Seven. Sticking with the tradition of their previous release, WMFS was recorded and mixed by band member Kevin Christopher in Olympia Today, the live lineup includes Rose on vocals and guitar, Liam Hindahl on drums, Sarah Redden on synthesizer, and Kevin Christopher on bass; the dynamic continues to be as supportive and collaborative as any group of people can be. Each member writes their own instrumental parts with Rose bringing the songwriting and melody. The trust the unit shares with one another is where the group’s power truly lies.

While My Father Sleeps begins with “25, Alive,” a dirge-y, distorted-guitar gem that is fueled by Rose’s lovely rise-and-fall vocals and its choppy-smooth rhythm. The album’s lone number written following her mother’s death, it is a self-appeal to release the anger Rose had been holding both during her mother’s life and after her passing. As the song opens with the lines “Am I strong enough to tell my truth/25 I am alive and I am angry,” the way is paved for the passionate soul-bearing that follows. “I was 25 when my mother died and I was angry and broken” Rose says. “This song is me saying I don’t want this anger because I know what it does to a person if they hold onto it.” 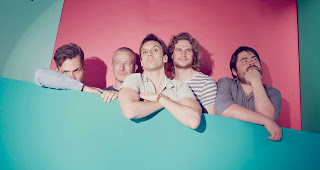 About ‘I Gotta Pay’ There’s a humbling eclecticism in Late TV’s sound when comparing ‘I Gotta Pay’ with previous singles like ‘Citizen’ and ‘Great Gulfs’. Just when you think you can pin them down, they throw a swerve ball from somewhere left-of-field. That their music still (lucidly) gets to the core of who they are with every release is a testament to their versatility as songwriters, their voraciousness as listeners, and their clarity of vision as a group.

Their latest release is a poised and effortless foray through the familiar avenues of jazz and funk, with Defunkt-style motifs of punk and new wave, (frontman Luke Novak name-checks the seminal ‘Make Them Dance’ as an influence), weaved in alongside the afrobeat-tinged rock of The Budos Band. Lyrically Novak has modern culture in his sights as he threads together a series of financial frustrations and western cultural ironies with rhyming couplets to make a dour and absurdist collage. Like all the music of Late TV, it’s a mutant assemblage of ideas that succeeds through the canniness of its juxtapositions, never setting out an ideal, but through the subtlety and force of their craft and energy alone, leaving us in no doubt as to what’s being communicated.

About Late TV Amidst the cultural detritus of television’s after hours rises a freaky new street beat played by London’s Late TV. Culling influences from jazz cats and art rockers, B-movies and trash television, via Lynch and Tarantino, Late TV are the moonlighting house band for a surreal all-night dream club where the intangible dance floor shifts and folds to become the set piece of a talk show beamed onto the farthest reaches of your channel selector. Helmed by Luke J Novak, who hails from the slabbed post-industrial backwater of Kidderminster, Late TV originates from a folk noir group formed by Luke and Richard ‘The Showman’ Bowman, a drummer whose restless search for groove quickly outgrew their genre.

Joined by Indiana’s jazz fusion obsessed Ryan Szanyi on bass, Parisian keyboard maestro Martin Coxall, tenor sax player Evesham Nicholas, and Matthew Halsall (whose bionic heart valve’s separate mic-detectable rhythms occasionally cause problems in the studio), their new outfit Late TV harks back to a time when music was all fearless fusion and intractable improvisation. 2018 saw them take major steps forward. Kickstarted with the release of their brilliant ‘Citizen’ single, the group then appeared at Standon Calling Festival that summer alongside Goldfrapp and spiritual forefather Bryan Ferry. They followed it up early this year with the wind-swept soft rock of ‘Great Gulfs’ - its louche romanticism showcasing their immense songwriting versatility. In the postmodern wastelands of pop they’re the high-brow/low-brow mutant junk dwellers, collecting the shards of our fragmented culture and building something both irresistibly dangerous and dangerously irresistible.