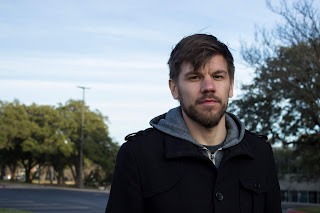 Galapaghost - A Planet Without An Atmosphere (E.P).

Prolific and visionary, Galapaghost, is a solo artist who has proven through a string of acclaimed releases his fearless experimentation and uniquely DIY artistic sensibility. Galapaghost has toured with the likes of John Grant, had his music in film (the award-winning Italian film Il Ragazzo Invisibile), and was even hit up by Netflix Italy for a promotional video for 13 Reasons Why. The music video for his song 'Jellyfish' (taken from prior full-length 'Sootie') was nominated for four awards at the Austin Arthouse Film Festival.

Which brings us to the brand new EP release "A Planet Without An Atmosphere", a collection that finds Galapaghost venturing further down the spiral into ambient electronica and intensely personal themes.

From the artist: "I recorded this album during a particularly difficult time last year. Last October, I got diagnosed with testicular cancer and a few weeks later my Dad was run over and killed while walking in a Walmart parking lot by a distracted driver. A few months after that my wife miscarried. At times I felt like a planet without an atmosphere, which is why I chose the title for the album.

Also, the album touches on the extreme disappointment that I have with every government in the world for their collective failure to implement any serious changes due to the crisis of climate change. People, and especially kids, all over the world are protesting because they want a better future for the next generation and they just keep getting stonewalled. It's especially awful in my country in the US, with Trump making absolutely awful decisions in regards to this issue because he doesn't believe global warming exists. I wanted to put a lot of ideas into a very short album and make sure that every song felt urgent and necessary." 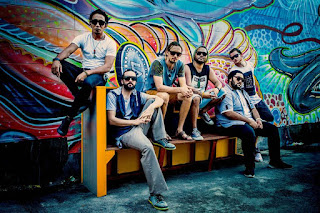 Born of the snow season in Victoria, jamming and snowboarding together, Sun Salute are an Airlie Beach based international collective that draw inspiration from nature, travel and community. Their philosophy is both simple and infinitely complex: to use the power of music for healing and change.

Politically driven and unafraid of voicing the truth, Sun Salute are not without their bite, but even at their most lyrically pugilistic they are positive and uplifting. Following on from No More and Hold On, two of the most purposeful songs Sun Salute have written to date, new single Dancehall Riddim continues the band's glorious hybrid of tones, styles and ideologies.

Musically inspired by vocalist Tane Tokorangi's trip to Jamaica where he immersed himself in the country's rich culture, it was only natural to soak up the community driven and wonderfully influential dancehall style. Lyrically the band says of the song, "Dancehall Riddim is about the connection between man and woman. It’s about the interwoven threads that bind the river people to the ocean people. It’s about love and passion. It’s about having the strength to step out of the status. It’s about finding the courage to follow your own flow and dance to the beat of your own drum."

Taking this movement worldwide, Sun Salute are a bright hope in dark times, which the world needs now more than ever. A product of the band's own rich cultural diversity, Sun Salute exist as a shining example of how humanity's differences only make us stronger together. 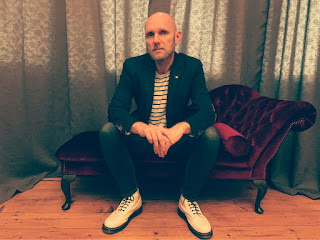 45 years rolled into 45 minutes. This pretty much sums up Songs of Loss, the debut album by A Permanent Shadow, released last month, which has garnered rave reviews, including Alternative Nation calling it "a most pleasant and welcome surprise – when we seemingly need it the most, in our mostly monotonous musical times.".

The ten songs on the album take us on a musical journey through the life of its creator. Lyrically the record portrays the lives of personalities that have inspired the author, some of them very close, some of them family, others fictitious. Happy-go-lucky it isn’t, though there are glimpses of hope, such as in the carpe diem song "Now", the album’s third single after "Empty" and "Fool", released on October 25th, 2019.

"Now" starts as a piano ballad but quickly evolves into an upbeat track with an electronic underbelly and hints of disco. On top of it all resides a life-affirming gospel chorus. The song, as its predecessors, arrives with a stunning video directed by Spanish horror movie director Dani Moreno. The video shows lead singer CP Fletcher in three different roles: TV personality/self-help guru, narrator as well as suburban suicidal gun fanatic. An accompanying cast of actors and musicians turns the video into a feast for the eye.

A Permanent Shadow is a band for want of a better description. Its only fixture is CP Fletcher who for the recording of the record surrounded himself with a rotating cast of musicians and producers. A drummer in a succession of unsuccessful bands, the Barcelona resident grew tired of viewing his bandmates’ bums from behind his kit and more importantly, to be relegated to the backseat without any real musical input.

After another stint in a band that would go nowhere at all, CP decided that enough was enough and turned his rudimentary musical ideas and fragments into actual songs. Some of them he had been carrying around for decades, others were made up as he went along after teaming up with Albert Català, a classically trained piano player who would help CP whip the demos into shape.