January 12, 2020
Team Me were featured a couple of times last year and the new song 'Into The Wild' is a refreshing indie track where the eight member band are found in a more sensitive mode. === Christopher Paul Stelling shares a beautiful video for 'Lucky Stars' a sumptuous and melodic singer-songwriter piece. === From Selkama we have 'Exit Signs' where feisty drums and more dreamy vocals make for an engaging track glued together with some fine guitar moments. === Bluegrass has been growing on me over the last two or three years and the new album from Sideline entitled 'Breaks to the Edge' has upped my appreciation even further, needless to say fans of this genre should love this. === The Lone Bellow have a distinct and very engaging sound as is born out by the anthem orientated 'Good Times' and the production is notably refined. === I have been a fan of Jenny Lewis's music since the day's of Rilo Kiley so the new track from Jenny Lewis, Habib Koite, Artists for Peace and Justice entitled 'Under The Super Moon' was a must hear, and it's a grand piece and a good reflection of the multi artist album due soon. === Lunaires have just released 'Healing Hurricanes' a melodic genre straddling song with plenty of atmosphere and melodic vibes.
------------------------------------------------------------------------------------------ 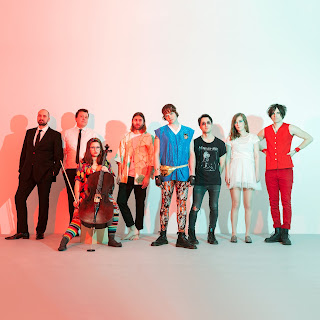 Team Me - Into The Wild.

After a festival filled Summer with slots at Træna and Pstereo, Team Me return with the sensitive and mesmerising ‘Into The Wild’, out via Propeller Recordings (Highasakite, Dagny).

Taking a stripped back approach incorporating more natural instrumentation, the track is a refreshing reminder of the 8-piece’s capacity and versatility to write indie bangers in all degrees. Frontman Marius Drogsås Hagen tells of the subject of the track “sometimes you get the urge to disappear and leave behind the ones you love in order to find peace with yourself”, and for Marius it’s about following the need to escape into the wild in order to return to society recharged, and able to appreciate and embrace his relationships.

When speaking of the band’s new chapter, Marius tells “as for the music, I really want to be more focussed on documenting this time, rather than releasing an album and touring for three years on a campaign. I want the project to just be a way to let things out of my system.” 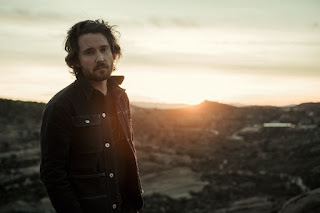 This weekend Stelling has released the tender new song “Lucky Stars”. The sonic simplicity of “Lucky Stars” reveals a richness of melody and emotionality in Stelling’s music. “It’s part love song, part lullaby,” Stelling says of the track, “with a gentle touch from the band and Ben’s haunting lap steel matching my guitar in the instrumental section, additional vocals by my partner. It’s about gratitude and the mysteries of the universe. Even to just be here and marvel at it all is enough for me most times. Even if it’s meaningless, it’s beautiful.”

Throughout Best of Luck, feelings discontent and self-doubt are transformed into messages of resilience and hope. Lead single “Trouble Don’t Follow Me” captures this perfectly, with an upbeat almost anthemic rhythm and soulful, gospel-tinged vocals. “It comes as no surprise to me that one of my most optimistic songs could be written in the most difficult hour,” Stelling says. “When all I needed was a little hope and a song I could play night after night and not get tired of. Something that captured the basic recipe for endurance. A song about marching on, a warning to anything that might stand in your way, and needing to feel strong for the people around you, so you can inspire them to do the same.” 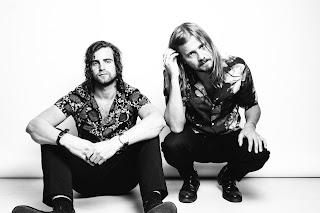 Exit Signs is a song about how easy it is to build walls around yourself after a long time of loneliness. You learn how to detach yourself from your emotions.

You learn how to come up with excuses to not let anyone in. It’s like the brain creates its own defense mechanism to make sure the safety of your heart won’t be endangered once again.

The song originally sounded like a shoegaze-ballad but the first thing our drummer did when we showed it to him was to play an energetic and steady beat. It felt funny in contrast to the gloomy lyrics and we loved it.

The second single from Selkama's upcoming debut album is called Exit Signs. It was out January 10. The album drops in early 2020. 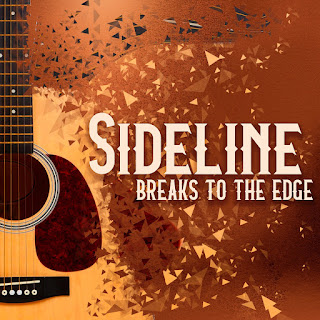 Sideline - Breaks to the Edge (Album).

Bluegrass powerhouse Sideline is keeping the momentum from a successful 2018 release and a major IBMA award going with its new album, Breaks To The Edge, now available from Mountain Home Music Company. Following the band's great success with its acclaimed release Front and Center and its single, “Thunder Dan” — which topped the year-end chart as the #1 Bluegrass song in radio, and followed that accolade by winning the IBMA’s Song of the Year in 2019 — Breaks To The Edge, is a collection of songs that range from high-energy traditional Bluegrass to progressive destinations and all points in between.

Reflecting the North Carolina group’s roots and experiences, the set includes stories of traveling troubadours like that told in their radio single, “Return To Windy Mountain,” a nostalgic reminiscence of country living in “Southern Wind,” a classic bluegrass ballad of tragedy, “Down In The Willow Garden,” the reproachful Stanley Brothers favorite, “Your Selfish Heart” and more.

On the more progressive side, Breaks To The Edge offers a cover of Steve Wariner’s “Crash Course In The Blues,” with Skip Cherryholmes taking the vocal lead on a wry tale that justifies the album title with Southern-rock style jams. At the other end of the spectrum, the classic southern gospel song "I’ll Live Again" highlights Sideline’s refined vocal abilities with supremely blended 4-part harmony.

Throughout, the band’s tight mix of power and dynamics is driven by the pocket and pulse of original member Steve Dilling’s award winning banjo and co-founder Jason Moore’s bass, while Cherryholmes, the third colleague at the group’s heart, dishes up impressive flatpicking from start to finish. With a loaded national performance schedule and now their 5th studio album,Sideline continues to be a tour de force in bluegrass. Breaks To The Edge captures this power, making a statement that Sideline will continue to do what’s propelled them to this point. 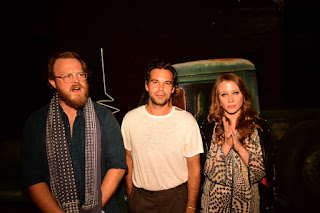 The Lone Bellow – Zach Williams, Kanene Donehey Pipkin, Brian Elmquist – have released the soaring and elevating "Good Times." a new powerful song from their soon-to-be-released album HALF MOON LIGHT (Dualtone Records, an Entertainment One Company). Out 7th February and produced by The National's Aaron Dessner, HALF MOON LIGHT is the band’s fourth studio LP and first one since 2017. Billboard premiered the "rhythmic, joyous" song with a Zach Williams Q&A earlier today. A short video about the writing and recording of the song is available now as well.

"Over the years I’ve had the great joy of staying up late and hearing epic stories told by adventurous souls," Williams said. "Some stories were told on old boats way out in the middle of the ocean, some in Irish Pubs in Manhattan, some in backyards down south, and some on hospital beds. 'Good Times' is a salute to the good ones who grab life by the horns and let no good time slip away." In November, the band released "Wonder," a song that underpins the entire album with a loving call to reclaim the childlike awe and appreciation age takes away. It is the record’s core message and transcendent truth.

"When the day is done, I often find myself wondering if I am losing my sense of wonder," says Williams. "My mind goes back to very specific memories. One is of my cousin and I driving in his old S10 pick up truck with a tape of Moondance in the deck that we found in his brother’s room. I remember watching the pine trees go by in the truck’s windows as we sang 'and it stoned me to my soul.' I remember the hope of the future and the absolute awe of life just pouring into our 16-year-old minds. I never want to lose that sense of wonder. I think that probably goes for all of us."

“We talked a lot about the concept of wonder and seeing people lose it as we get older,” Kanene says. “I hope this record is a journey back into wonder –– not through any falsified sense of ‘Everything’s going to be fine,’ but through the beauty and the pain of what it is to be human.” - “We made this record in a place of joy and collaboration with our friends. We were trying to do something bigger than ourselves,” Brian says. 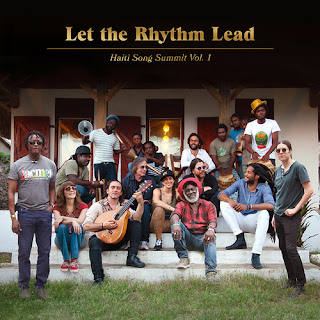 Jenny Lewis, Habib Koite, Artists for Peace and Justice - Under The Super Moon.

Hailing from four different countries, interweaving North American Indie Rock with beats and percussion of Haitian Vodou, Spanish and Malian guitar, Tres Flamenco, with songs in English, Creole, Khassonké, Manding and Spanish, Let The Rhythm Lead celebrates the work of Artists for Peace and Justice in Haiti, and was recorded at their Artists Institute on the island's southern coast, in the town of Jacmel.

As Lewis  explains, "Under The Supermoon" is "a love song written in Jacmel floating in the Caribbean sea under the supermoon of November 2016 just days after the US presidential election... a travelogue of sorts processed in real time…"

Artists for Peace and Justice (APJ) is a non-profit organization that encourages peace and social justice and addresses issues of poverty around the world. Our immediate goal is to serve the poorest communities in Haiti with programs in education, healthcare and dignity. We are committed to long-term, sustainable development in direct partnership with the Haitian people. Our model is simple: we believe in empowering local communities, fostering economic growth, and the power of education to change a nation. 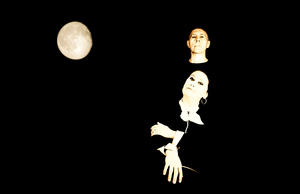 Lunaires is the new project by Danilo Carnevale and Patrizia Tranchina, ex-members of Jeunesse d’Ivoire, an underground legendary Italian wave band active in the early and mid-Eighties. It’s a project stretched in time, from the post-punk of the early eighties to the post-everything of today.

The historic group Jeunesse d’Ivoire were featured in Body Section in 1983, an historical compilation of the seminal magazine Rockerilla – along with Litfiba, Kirlian Camera and Diaframma, among others.

The band toured extensively throughout Italy, including Milan, Turin, Florence, Rome, Bologna, Modena, Pisa, Brescia, Naples etc., supporting acts such as Kirlian Camera and the German band No More, and growing a strong reputation for their powerful and dynamic live sets.

Lunaires is the landing point of a long musical journey which embodies and testifies two very distant and still related musical eras, that of the crudest and most innocent post-punk of thirty years ago and today electronica, bordering on psychedelia, shoegaze and krautrock. The album “If All the Ice Melted” has been released in April 2019 by Wave Records (Brazil), that’s also going to release the brand new single “Healing Hurricane” early 2020.