The Ah - The Factory Girl.

On the song, Gustin explains, "'The Factory Girl' is based on a traditional Irish song I first heard Margaret Barry sing. When struck by the beauty of the melody and the phrasing, I challenged myself to see what I could do with it to completely change the vibe, but keep the integrity of the melody. As I decided to not have vocals here, the narrative of the original, of course, is lost. But my friend Yuan just happened to be over my place at the moment I was recording this and I asked her to improvise some dialogue, which she did brilliantly. This of course alters the original narrative but keeps the underlying theme of love intact." The release of Mere Husk will be celebrated in conjunction with Gustin's forthcoming photography book Foundscapes (releasing with 11A Records) at Brooklyn NY's Step Bone Cut on February 1st. Mere Husk is available for preorder on Bandcamp (with a limited quantity of the album and book available as a bundle) and will be out January 31st via NNA Tapes.

Jeremy Gustin is a one-of-a-kind drummer who has toured and recorded with Rubblebucket, Okkervil River, David Byrne, Marc Ribot, Delicate Steve, and Albert Hammond Jr.. He has long been in demand for his ability to bring a touch of the unorthodox to highly structured and improvised musical settings alike, so it should come as no surprise that on his own solo project, The Ah, Gustin explores the outer boundaries of his imagination to the fullest. The Ah's new album Mere Husk, the follow-up to 2017’s Common Bliss, sees Gustin once again crafting animal noises, water sounds, miscellaneous found audio, and his own playing into a harmonic language that straddles the line between his love of pop songcraft and his equally strong attraction to the abstract. Rather than employ gurgling fish tank bubbles and dolphin calls for their ambient properties alone, for example, Gustin bends them beyond recognition so that they mimic synths or serve the role of instrumental parts in an arrangement that falls together like a classic "song" --- whether Gustin includes vocals or not. "I love songs and melody," says Gustin. "As much as I like unusual stuff, I'm a song guy at heart."

Gustin's longtime passion for photography gives us a window into The Ah's animated sonic universe. Whether he is out touring or just walking home from the grocery store, his eye is constantly drawn to the interplay of color, texture, and shape calling out to him from surfaces the rest of us might pass by without so much as a glance. A typical Gustin photograph captures what he refers to as “Foundscapes”: for example, multiple layers of posters on a Tribeca wall stripped and frayed to form an unintended collage; chipping paint rendered in such three-dimensional detail that it seems to invite your fingers to run across its contours; delicate veins of copper rust slowly eroding on a dented expanse of bright blue.

In several respects, The Ah is Gustin's musical answer to his visual Foundscapes. "When I'm writing music," he explains, "I look at it as something akin to archeology. It's not like 'This specific thing happened to me so I want the music to sound a specific way.' It's more like I'm chiseling away until a shape emerges and it starts to seem like music. In a way, I let the music create itself. I don't even see it as I'm creating so much as I'm just finding things. These materials are all around us all the time." As intuitive as Gustin's process may be, Mere Husk expands dramatically on the vision introduced with Common Bliss. Though twirling from playful to solemn and back again, Gustin's music is as easy to take in as watching the myriad shades of colorful marine life swimming through an aquarium. 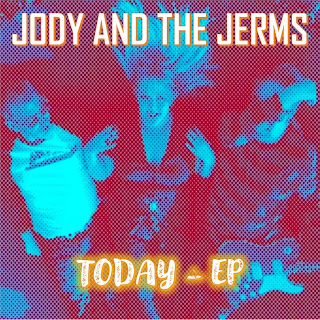 Following success and attention for singles released in late 2019 such as ‘He Doesn’t Know Me Much At All’ and ‘Never Going Home’, the indie-pop trio from Oxford have released their debut EP titled ‘Today’. Not only have the group been making an impact in their hometown of Oxford, but have sparked attention internationally with rotation plays from one of Spain’s biggest radio stations RTVE.

The EP has 4 tracks, starting with punchy title track ‘Today’, which showcases the melodic sounds of lead singer Jody Jeger’s voice, impactful drumming from Alex Bridge and an uplifting and bright guitar solo from Niall Jeger.

Tracks such as ‘Breathe’ show characteristics of twee pop with male/female harmonies and a catchy melody. While ‘He Doesn’t Know Me Much At All’ is certainly the most upbeat track, the EP has levels and dynamics with ‘Back In The World’ being a more chilled out number. 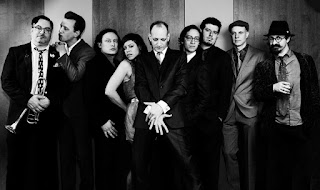 World/Inferno Friendship Society - Having A Double Life Is So Hard (But Obviously Something You Enjoy) V1.

World/Inferno Friendship Society are back with a new single from their upcoming All Borders are Porous to Cats LP. The album is set to be released on January 17th 2020 via Alternative Tentacles. Catch the band on tour throughout January and February.

World/Inferno Friendship Society's long awaited new album dares you to try and decipher it’s multi-layered, encrypted message, while dragging you kicking and screaming through a succession of flashbacks, alternate realities and drug and alcohol induced delusions. While World / Inferno is known for its utter disregard for boundaries of genre, All Borders are Porous to Cats deliberately pushes the limits of what could possibly be perceived as punk rock. It scores tales of fugitives, arson, larceny, perjury, drug addiction and freedom with elements of soul, funk, latin, polka, and classical music, as well as World /Inferno’s signature punk cabaret sound. 3 years in the making, 4 missed release dates, 5 lost band members, many a bridge burned, and a defamation lawsuit waiting to happen, The World /Inferno Friendship Society invites you to enjoy the fruits of their perpetual torment.

Take it as a promise, and a patent fact: All Borders Are Porous to Cats. The World/Inferno Friendship Society’s 7th full-length LP finds the collective reset and reinvigorated, behind the lyrics of Jack Terricloth, apparent possessor of the punk rock fountain of everlasting style and rage. The album follows Cat in the Hat (no relation), an undocumented refugee who is framed for a crime and requires the assistance of a ragtag gang of miscreants, academics, orchestra-caliber musicians, and radical insurgents—sometimes art does in fact imitate life!

The album sees the band at its most expansive musically—covering everything from Bowie-esque ballads to Balkan punk stomps—to 2 Tone ska, and inflammatory lyrically, with tales of romance, righteous indignation, and resistance. 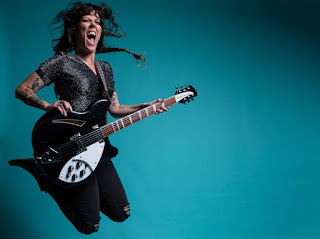 As rewarding as Trinity Lane’s success was, the collection came from a emotionally challenging place, and Lilly found herself frequently visiting the hurt and struggle that inspired it as she spoke candidly to the press about her painful breakup, her struggles with sobriety, and the overwhelming sadness of her mother’s suicide. Rather than succumbing to the weight of it all, Lilly managed to emerge stronger and more serene from the experience, treating it as a foundation from which she could begin the essential work of re-examining her relationships and the world around her. “When I got that little gap in my schedule, it gave me the chance to appreciate some mental stillness,” Lilly says. “I can be a pretty anxious person, but I found a sense of peace by deconstructing all of these interactions and emotions I’d experienced and reconfiguring them into songs. It helped me make sense of everything and learn to relax.”

The resulting eleven songs found on Walking Proof walk the line between Lilly’s rough, rock and roll exterior and her tender, country roots, exuding a bold vulnerability as she takes a deep and unflinching look in the mirror. What emerges is a maturity in her writing, an abiding sense of calm in the face of chaos as she learns that sometimes, you have to let go in order to get what you want most.

Lilly Hiatt has also announced her initial tour dates in support of Walking Proof, launching April 2nd in Atlanta, GA. Prior to the tour, Lilly will embark on a run of solo acoustic dates supporting Hiss Golden Messenger beginning tonight in Wilmington, NC.  Please see all dates below.

Walking Proof will be available on compact disc, across digital platforms, and standard black vinyl. A Limited Edition Translucent Turquoise Vinyl Pressing featuring a Black & White 12x12 insert of the cover artwork will be available at Independent Retailers. A limited to 500 copies edition autographed by Lilly Hiatt will feature One-Of-A-Kind Random Colored Vinyl, a Black & White 12x12 cover artwork insert, and a box of colored pencils is available for pre-order now via New West Records. 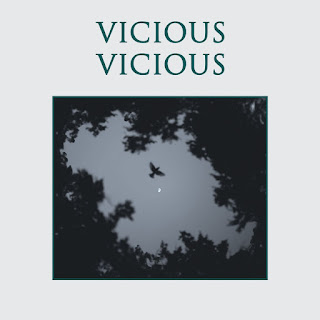 Revolution, I Love You - Vicious Vicious.

Revolution, I Love You releases "Vicious Vicious” via Redeye USA. This is the last single the band will release before the arrival of their next album, Black Feathers.

The song takes a refrain heard often in the wake of too-frequent episodes of police violence against Black Americans and warps it, twisting it to reveal the words' sinister and callous undertones. The band manipulates textures throughout, running drums too hot through an old 4-track, chopping a vibraphone solo into something alien, and bending deep bass synths in ways that demand a subwoofer, creating an atmosphere charged with anxiety.

Coming in 2020, Black Feathers will be Revolution, I Love You’s first full-length record since their 2011 debut LP, We Choose to Go to the Moon. Black Feathers drops on February 7, 2020 and is available for pre-order here.

Revolution, I Love You is Rob Lindgren (lead vocals), Jason Reynolds (guitar), and Jeff Ormsby (drums). Noisetrade described the band’s first record as “exactly what’s been missing in your life”, praising its “perfect mix of real-world instruments and digital flourishes”. The Philadelphia-based band has been a finalist in the International Songwriting Competition, performed at Toronto’s NXNE, and has a song included in the British National Library Sound Archive. 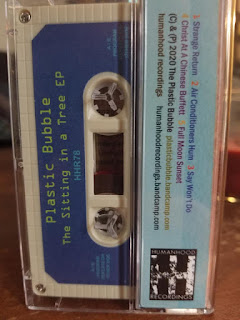 Plastic Bubble - The Sitting In A Tree E.P.

Indie psych pop group Plastic Bubble's have a new release, The Sitting in a Tree EP. This 5-song platter is available physically in a limited cassette release from Louisville's Humanhood Recordings and is available for streaming and download on the label's site and our bandcamp page.

Matt Taylor formed Plastic Bubble in 2012 as a vehicle for the indie psych pop material he was recording at home with a rotating cast of friends in Louisville, KY.

Plastic Bubble evolved into a proper band for a few years before morphing back into a loose recording project/ fun little indie pop hobby club that could still become your favorite band. 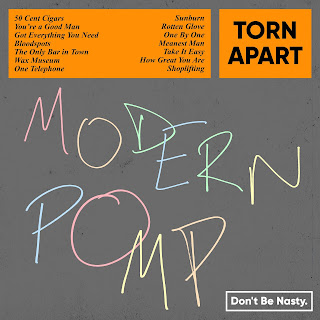 Dark disco debut album out now. A dark disco in a fallout zone.

Swimming in a haunted pond at night. A relentless drum machine partnered with sad funk and a spring reverb loaded guitar.