Erenkov wrote "Lamplighter" after playing a show at the Sou’wester trailer resort in Washington state, and at the Lamplighter, where he spent the rest of the evening drinking Fireballs. He says "Lamplighter" is about his attempts to escape anxiety through alcohol and other vices; "While indulging, I often convince myself that I'm on some kind of path to enlightenment, that I'll find an escape from impermanence and be able to touch the eternal, but all of my hedonistic impulses lead me back to the same reality. And I'm left to face the fact that even the truest love is impermanent. The song takes its name from a bar on the misty Washington coast where I spent an evening drinking with close friends after a show. The night and the following day's walk on the beach were both enjoyable, but I was particularly struck by how much my conversations, thoughts, and actions were avoidant of the present. Whether through alcohol or simply distracting myself with thoughts of the future, I find ways to fight reality.

Eternity Bay follows the band's debut album, 2018’s Songs of The Saxophones, as well as a string of sold-out 7” singles (If You’re On the Water, Aloha, and Singing Desperately Suite). It was recorded by Cameron Spies (Radiator Hospital) in Portland and mixed by Noah Georgeson (Joanna Newsom, Devendra Banhart) in LA. Eternity Bay will be released on March 6, and is now available for preorder via Full Time Hobby.

The Saxophones’ band name started out as a half-joke for the songwriting project of Alexi Erenkov, who, at that time, was a disillusioned jazz student. Erenkov had recently ditched the instrument, as jazz hadn't offered the room for self-expression that he sought. His solo project became a band when his wife Alison Alderdice joined on percussion, and their debut album, Songs of the Saxophones, was released just before the birth of their first son in 2018. Written aboard the boat they lived on together (amid the incessant rain of a northern Californian winter), the record established The Saxophones’ style, drawing from fifties exotica, west coast jazz, and seventies Italian lyricism. Drama seeps into The Saxophones' deceptively simple sound, transforming dreamy surf pop into thoughtfully textured pieces, with a spaciousness at the core.

The band's forthcoming second album, Eternity Bay, began to take shape just after the arrival of their first son, who shook up Erenkov’s writing routine far more than choppy boat waters ever did. "My music has always grappled with mortality and the meaning of existence," he says, "but the birth of our first son and the imminent arrival of our second has greatly heightened my sensitivity to these themes." The forced fragmentation of his hours, writing under inky late-night skies and through the liminal glimmer of dawn, brought new qualities to the surface of his songs. "While this record was influenced by a broad range of music," he explains, "the through line seems to be conveying a strong mood or sense of place. I love music that transports listeners to another space, whether it's Jonathan Richman making you feel like you’re walking the streets of Boston in 'I Love Hot Nights' or Arthur Lyman transporting you to a Hawaiian hotel lobby in the 50s." 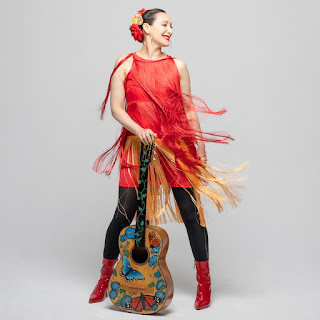 Rachael Sage has released the first single from her forthcoming album Character: a string quartet version of the classic Ani DiFranco song "Both Hands". The accompanying music video premiered on PopMatters. Sage has also just been confirmed as support on the Howard Jones Acoustic Trio's Winter 2020 US tour, beginning on January 28 in Seattle.

Sage's fresh, string-quartet take on "Both Hands" is both musically unexpected and a full-circle moment. Sage's first-ever tour was as an opener for DiFranco, and she has long been inspired by her fellow indie label owner – but in this case, it was more vital. While undergoing treatment for cancer in 2018, Sage listened to "Both Hands" as part of a playlist that kept her "determined and strong". A year later, it was a natural fit for her new album Character, due out on MPress Records on March 6.

Produced by Sage and Grammy® winner Andy Zulla, the track features a string quartet performing an arrangement by cellist Dave Eggar (Evanescence, Coldplay), Sage, and Chuck Palmer. Zulla set up cameras around Carriage House Studios in Stamford, CT to capture the recording process, and edited the footage into the official music video, which has premiered exclusively on PopMatters. The single is now available on all digital platforms, including Apple Music, Amazon, and Spotify.

January will also see Sage heading back out onto the road supporting 80s music icon Howard Jones, after accepting his personal invitation to join his US Acoustic Trio tour. Beginning on January 28 at Seattle's Benaroya Recital Hall, she will support dates in cities including Los Angeles, Austin, St. Paul, New York City, and Miami.