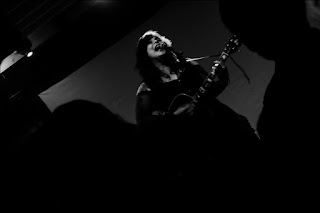 Caroline Blind - The Spell Between (Album).

During these very turbulent times for the world and the music scene, Caroline Blind shares her debut solo album. The Spell Between is a gothic love letter to some of the songs that inspired Caroline throughout her career, combining covers, reworked Sunshine Blind tracks, and original new material. The record features collaborations by Rich W. of the Wake, Dave the Dramedy, David Wolfenden of Red Lorry Yellow Lorry, Ashe Ruppe from Delphine Coma, George Earth from Switchblade Symphony, and Gordon Young from Joy Thieves/Pretentious Moi/Children on Stun/ The Dream Disciples.

The Spell Between includes eleven tracks that transmit different moods and feelings, all connected by a dark folk undertone. Songs like "God Damn the Sun" and "Heaven" reflect Blind's passion for acoustic guitars; while "Tribe" has pulsating electric guitars and percussion, for all the post-punk lovers. "Death to Sleep" explores aerie and experimental atmospheres, that Bjork fans would find appealing. One of the highlights of the record is Caroline's stripped down interpretation of the classic song by Bill Withers, "Ain't No Sunshine"

The album comes out with a video for the single "First", the track that serves as an opener for the record and the fourth single released by Caroline. "First" is a subtle goth ballad, Blind's version of The Wake's dark-wave song. 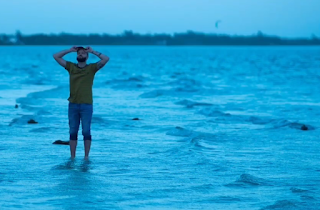 Bahamian indie-folk artist Matthew Pinder has released a new single, “Blue”, on all major platforms. Collaborating with Sara Davis Regan (vocals), Chris Jacobie (producer) and Mitch Webb (engineer), Pinder has crafted a beautifully relaxed melodic soundscape to frame the vulnerably intimate lyrics that explore Pinder’s inner thoughts as an artist. “I don’t remember writing this song. I just know I wrote it when life stretched and collapsed during the aftermath of my mom dying.

I had no intention of moving, I had no plans. I think I knew I would eventually make songs again but I started feeling tired of the artist image I created. I preached honesty and vulnerability as if I invented the concepts. When I look back at old interviews or read how I used to describe myself and my songs I ask myself, “who the fuck is this guy?” Writing new songs became less about trying to be as deep and heavy and emotional as possible and more about making music that felt good to me. I don’t want to tell people what they should feel from my music. I like “Blue”, it makes me feel good… I just hope that whoever listens this song can make their own meaning out of it.” - Matthew Pinder

Seeking to find answers and slow the world down, Matthew Pinder is an artist that explores the mountain range of human emotions with a tender artistry that commonly threads throughout his music. The Bahamian singer-songwriter sings from his own experiences, never afraid to bare the raw honesty of life and use his music to tell the stories that often go untold, allowing his music to leave an "indelible mark on indie-folk music" (B-Sides & Badlands). Working with Chris Jacobie (Penny & Sparrow) to create his latest album, Give Me Some Time was met with high critical acclaim and hailed as "Pinder's magnum opus: a debut so rich and extravagantly heart-rending and deeply-crushing" (B-Sides & Badlands).

This album yielded the viral hit single, "Golden Hour", that launched Pinder into becoming a truly emerging artist. A fan favorite, "Golden Hour" has amassed over 1Million streams since its 2019 release, followed by hit singles “Break My Heart and Let Me Go” and “So Far”. Combining his modern flair with influences of classic singer-songwriters such as Neil Young and Bob Dylan, and present day artists such as Noah Gundersen and The Head And The Heart, Pinder melds it all into a sound that is completely his own - a sound that we are eager to see continue evolving.