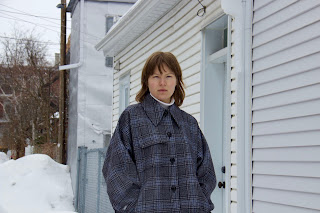 Montréal-based singer-songwriter, Camille  Delean, is sharing her enticing new single, ‘Fault Line (Late July)’. In tandem with releasing new music, Delean is announcing news of her sophomore album, Cold House Burning which is due for release via the Hull, Québec-based artist-run label, E-Tron Records on June 5, 2020.

Whilst becoming something of a staple on the East Coast Canadian music scene over the past few years, supporting the likes Timber Timbre, Fink and Andy Shauf along the way, the new album trails Delean’s 2017 debut, Music On the Grey Mile, an album that introduced the artist’s distinct palette. Whereas her first record was a cumulative travelogue, a reflection of disorientated years on the move, Cold House Burning summons a present-tense examination of its opposite: a troubled settling down. Inertia brought on by illness developed a feedback loop of sorts, a spiralling sense of solitude; it was a strictly interior world decorated with isolation, homebound routines, and internal dialogues, pieced together with little victories.

With a swelling tempo and carefully sewn layers of percussion, strings and saxophone, ‘Fault Line (Late July)’ explores the perilous pitfalls that surrounded her physical and psychological state when writing. “It’s a hyper-anxious way of moving through the world,” she says. “Full of warnings, as if being alive meant getting away with something. A snapshot of a state of mind: a good place to visit, but not to linger.” Though sombre in tone, it acts as a true beacon of hope on the album, shining a torchlight through her malaise and looking it in the eye.

Written over an extended period of near seclusion at home in Montréal, the album has morphed into a true child of the city, welding together a collection of songs recorded with a pool of trusted collaborators from the city: Delean’s co-producer, Michael Feuerstack (Bell Orchestre, Snailhouse), Jeremy Gara (Arcade Fire), Mathieu Charbonneau (Last Ex, Organ Mood) Philippe Charbonneau (Scattered Clouds, Esmerine), Joshua Zubot (Land of Kush) and Adam Kinner (Land of Kush, Leif Vollebekk). 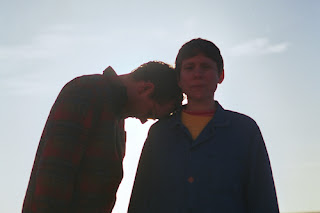 Orpine are Eleanor Rudge and Oliver Catt. Migratory birds nesting in disparate climates; singing in harmony 300 miles removed. Being outside and keeping off the internet. Mostly apart but never alone. Following brief stints in bands and singing on one another’s records, the pair lost touch. Ceasing to make music, days punctuated by silence, Eleanor made contact.

Having not seen one another for years, they ventured to a cottage in the Scottish Borders at the foot of Black Hill. With only a stove for heat and a car full of groceries for sustenance, four days of writing passed.

The result is debut album ‘Grown, Ungrown’, produced by Jonathan Coddington (The Magic Gang, Joanna Gruesome). Delicately branching and bereft of irony and cynicism, the songs have room to inflate and deflate, to meander, and shake loose like an antidote to sagging spirits. Harmonies wash against gentle strums and climb from the ambient to the anthemic as Orpine turn their backs on modern absurdity with nerve and solemnity. Like a tiny figure on the horizon casting a huge shadow on the mountain, there is a humbleness about ‘Grown Ungrown’ that projects awe without hubris.

While the bulk of the record was recorded in The Crow’s Nest in Hackney, all of the strings and brass were added at Greenman Swaler – a secret place Oliver helped some friends build when he was a teenager. Decamping from the studio to a den-like locale befits an album with a narrative that is generously autobiographical. “I’ve worked with Jonny since before we knew what we were doing so we have a good understanding of how the other works. The desk has more channels now but the relationship remains the same.” states Oliver.

First single, ‘Sondern’ is a song about grief and defeat. Written around the time of the first Brexit deadline, the title is a German conjunction that derives from an old Germanic word which meant ‘to separate’. “I liked the idea that this use of the word is outdated and it had morphed into something it was never originally intended to be – which was a lot of the criticism being levelled at the European Union on the Leave side.” Its movements lurch, and contract and expand with an inevitable seasonality, from giddy summer to lunar winter, before melting into the payload of a tender spring: “I love you. I always did.”

‘Two Rivers’ speaks of the purifying feeling of laying on the bed of the River Ouse near Mount Caburn, near Elanor’s home town. Submerged and held quietly in water, the industry of transport links dissolves to be replaced by the sunken stillness of the natural world. “Easier to be, than to be gone.” muses Eleanor. The second river, and namesake, the River Ouseburn runs down the road from Oliver in Newcastle. Two little river versions of each other, hundreds of miles apart, striving for the same creative open waters.

The record’s title is taken from the Walt Whitman poem ‘On The Beach At Night Alone’ and is intended as an expression of being between two things; the theme of duality characterises the work: knowing and not knowing, understanding and not understanding. A state of flux that Orpine have imbued into their live shows; depending on the performance, they have the ability to call upon drums, strings and horn sections, or opt for the simplicity of two voices and two guitars.

Not subscribers to the cult of modernity, Orpine choose instead to make visors with their hands and squint back to landscapes left untouched. A return to nature is favored over the fatigue of likes and followers, the hum of commerce logistics and temporal edge of diversified eating experiences. The countryside liberates Eleanor and Oliver, enabling them to view the modern world, select all and delete.