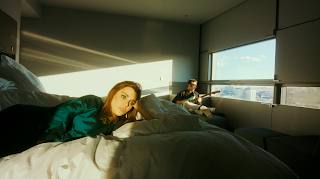 'LAUREL’ was out yesterday April 10 and is the first single from MYNTH’s 3rd studio album (SHADES | MYNTH), which will be released in September 2020.

With their new single, the twins Giovanna and Mario have refined the sound of MYNTH, whilst maintaining their signature electronic trip hop vibe. In ‘LAUREL’ the guitar is at the forefront, creating gloomy and edgy mood, balanced with a dreamlike state of mind.

‘LAUREL’ is an unobtrusive companion on the road to nowhere on a mild spring night, providing insight into a bizarre and surreal world of sounds and images. Director of the video Gabriel Hyden worked with the twins, and all three took inspiration from David Lynch to bring their vision to life. They play with impressions of a foreign sphere. In the context of self-isolation, emotions are taking shape and embody a nightmarish feeling of oppression, which occasionally gets burst by hopeful sunrays and bright soundscapes.

It’s when loneliness and lust for life ask the protagonist for a dance, she realizes she’s trapped in her own dull and seemingly perfect world, owning everything she needs. But more and more she’s losing the ability to live in the moment. Everything moves past her, she tries to figure out what’s happening in the world, and in her loneliness she almost becomes the voyeur of these little puppets out there in the carousel that rotates ever faster. A spinning top that draws the audience into madness. "I run away, I run away" - over and over, we run away. 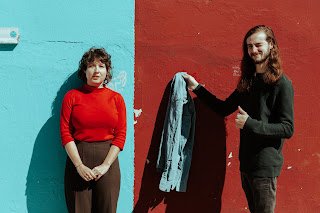 Finding common ground over a love of the jangly guitar-driven pop of the late ‘80s and harmony-saturated rock of the ‘60s, the four draw lyrical inspiration from personal experiences and self-reflection.

The band’s first single “Christian” was released at the end of February and appeared on Spotify’s Fresh Finds: Indie editorial playlist. 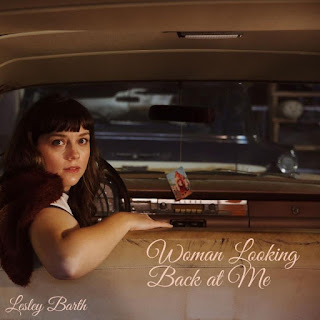 Lesley Barth - Woman Looking Back at Me.

We are excited to share the first single, "Woman Looking Back at Me" from NYC singer-songwriter Lesley Barth.  The track is a reflection on negative self-talk and chronicaling Lesley's journey of transformation as she quite her corporate job to rebuild her sense of identity.

Lesley's remarks on the "Woman Looking Back at Me":

Woman Looking Back at Me is a song I wrote on the bus after going to a friend’s holiday party where I felt super self-conscious and self-critical.  I had begun meditating daily and I think that caused the flash of inspiration - all of the sudden, I thought, “wait a second, who is this bitch criticizing me nonstop in my mind?”  Putting some distance between my negative self-talk and my true self was really helpful, and, you know, why not set it to a Blondies-inspired disco beat?

Lesley's remarks on the album I wrote this album during the process of completely uprooting my life, and recorded it as I was still navigating a life without structure and regular paychecks. It's an album for these uncertain times where many people feel their lives have been stripped to the bone, they've woken up from a daydream, and they weren't sure what tomorrow would bring because that's where I felt I was when I wrote it.  Almost all the savings I had for quitting my job got wiped away by healthcare costs, and I had to scramble."

We urge you take some time with this heartwarming collection of beautiful songs. "Big Time Baby" is out 5/15/2020. 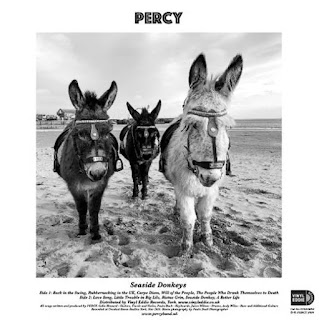 Yorkshire based Percy gained notoriety in the early nineties when their home brand of left-field post-punk led to a record deal with legendary Leeds label Mook Records and consequently airplay from John Peel & Steve Lamacq. They made ‘single of the week’ in Melody Maker and rode the wave of minor indie celebrity status.

Songwriter/lyricist Colin Howard (Vox / Guitars) and Andy Wiles (Bass) have continued to operate as ‘Percy’ since, undergoing several line-up changes over the years, most notably with ex-Housemartins’ Hugh Whitaker joining them on drums between 1997-2004. Whilst Colin and Andy have been together such a long time developing an almost telepathic connection, they both agree that there has never been as much energy and eclectic productivity in the band since they were joined three years ago by Jason Wilson on drums and Paula Duck on synths.

A lover of improvisation, Jason brings some real hammer to the tracks when required and amazing subtlety when space is needed. Paula's synths bring a flourish and depth that, while commonplace in the proto-indie bands of the eighties, has all been swept away by the standard modern band set-up of guitar, bass and drums.

The process for new album ‘Seaside Donkeys’ started with the invitation from Vinyl Eddie Records of York to release an album on 12” vinyl. The band were inspired with the prospect of a vinyl album as this was something that had eluded them to date. There was a conscious intent to team up with a top level engineer and studio sympathetic to the band’s sound so they recruited Isaac Minnis at Crooked Room Studios in York, who has also recently been involved with breakthrough recordings by The Howl and The Hum and Avalanche Party.

True to the band’s punk ethos the album was recorded with the full band in a live room, with minimal separation and minimal overdubs. The recording included a number of songs so fresh the band were sight-reading as they were being recorded. In some cases, the final lyrics were yet to be written and the lyrics simply improvised on the day. This purposefully delivers that fresh and immediate sound to the recording, creating a white-knuckle ride for the band and listener alike at times.

First single from the album is double A-side ‘Seaside Donkey’ and ‘Love Song’. Out on April 3rd, they are poignant and relevant to a country and planet on the brink of unchartered waters, choc-full of slang from the north-east, and clearly showcasing the depth of style and quality among the band, whilst future single ‘Will Of The People’ with its in-your-face riff and swirling synths offers an ageless rage of being dragged off into isolation in a future that obsesses over the good old days, prophetically in the UK’s recent trials.

Elsewhere on the album ‘The People Who Drank Themselves to Death’ is a witness to decades of decay in the North of England. A memento mori to larger than life characters cut down to size by a culture that expects a daily excess of alcohol. ‘Big Lil’s’ is a fanciful story of a visit to the fabled pub of the same name on the Headrow in Leeds with its mock-saloon doors and a crowd that goes quiet when you enter the room.

The whole collection represents the gritty realism of the 2020s. There are big issues out there to wrestle with, and maybe this album just says: You are not alone out there. The album photography by Paula Duck, shot over multiple visits to Scarborough on the north-east coast is a witness document of the place before the impact of CV-19 and what Brexit will become.