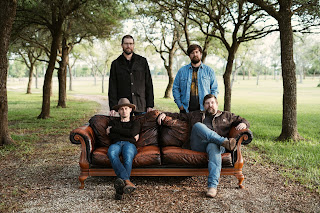 Of the song, Matt says: "Home is not a place. It is a connection to another person. When you lose those people, you feel uprooted, disconnected, and lost. Being out on the road is hard on a relationship, yet the constant war inside us wages between the dreams we chase and the people we love. Sometimes the road wins and we are left with nothing but our own wanderlust."

Market Junction. Not a place as the name implies but rather the name of a band that has engaged fans with their songs of love and loss since 2012 when they released their freshman effort, Heroes Have Gravestones.

In 2011, Matt Parrish gifted friend and fellow songcrafter Justin Lofton a vinyl pressing of Ray LaMontagne’s God Willin’ & The Creek Don’t Rise for his birthday and the fires of inspiration were ignited. The pair set out on a journey to create the kind of music they not only loved to listen to but music that they loved to play. Since those early days, the band soon expanded its lineup to include Taylor Hilyard on bass guitar and Michael Blattel on drums, sharing stages with Cory Morrow, Ray Wylie Hubbard, Jack Ingram, Radney Foster and more.

“We’ve done nothing the conventional way”, says Parrish. “It’s taken us nine years to figure out who we are and what direction we want to take our careers,” adds Lofton. The combination of lyrical prowess and Lofton’s fretboard mastery has resulted in a sound that is rooted in place and time, but that transcends both. While the band has found success in their beloved home state of Texas, they are ready to show the rest of the world what they can do.

The wait will have been well worth it for Americana music fans across the country - Market Junction will release their latest LP, Burning Bridges, on August 7, 2020. This collection of songs tells one story, one of a young man learning about love and its consequences. Sometimes the heartbreak spurs the traveling, and other times the traveling is the cause of the heartbreak. Either way, Burning Bridges will break your heart in the best kind of way, and have you reaching for the keys. 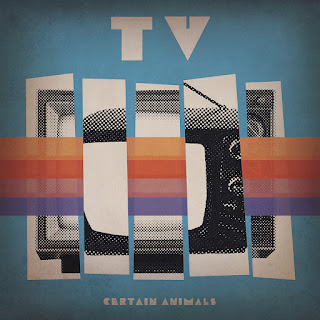 The new Certain Animals single TV opens with a phaser-turned drum fill, followed by an epic double guitar harmony with a battery-powered fuzzbox set to the max. Flanked by a rhythm section consisting of congas, bongos and grunting bass that wouldn't look out of place on an obscure soul record, Certain Animals are telling a story about two sides of the media medal. On the one hand, uptempo and full of bravado: the media magnates and internet giants who look forward to a glorious future where your sins are forgiven, as long as you stick to the screen. On the other hand, harmonious and melancholic: the memory of simpler times, with two or three television channels and a more sincere look. With their single TV, Certain Animals capture the ambivalent feelings they have about the contemporary media in just under five minutes.

Without being stuck in the past and with a critical view on the present, the band brings you their intriguing sound which makes for an energetic live show filled with intimate moments and explosive bursts of energy. In less then three years, the band managed to build a strong live reputation by playing shows on major Dutch festivals in famous venues all over the country, and they also performed across the border in Belgium and Germany.

While busy touring, band members Thijs van Leeuwen (vocals, guitars), Niels-Jan van Dijk (bass, vocals) and Kees Braam (drums, vocals) managed to build their own recording studio at a former red light district in the port of Rotterdam. At their home base the trio writes, produces and mixes their music single-handedly.

The album release had to be postponed until September, but no worries, Certain Animals got you covered this summer! The last two singles of Certain Animals were picked up by UK's Amazing Radio - the only station in the world playing 100% new and emerging music. Single 'Tangerine' even made it to #5 in The Amazing Chart! 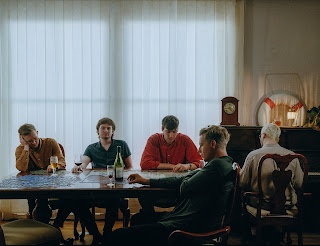 The Brave Faces - Lots Of Nights Out.

The band’s new single, 'Lots of Nights Out', bursts straight out of the gate with two intertwining guitar lines. Complementing and competing, the two create a frantic indie soundscape while bass and drums combine to keep the peace. The chorus’ catchy hook is deceptively bright and poppy, distracting from the tension and exhaustion expressed in the lyrics. In the track’s penultimate offering, the lyrical tone switches up and delivers a mantra to reassure: ‘just give it time, time will heal, it’ll be okay’. The song sets out to take you through many different headspaces before setting you up to do it all again.

“‘Lots of Nights Out’ is about getting to an age by which you’d always thought you’d have it all figured out, but you still haven't. You're in pain, you’re worried about getting old and you feel directionless.” says the band’s lead vocalist, Darrell.

“It explores and critiques the only ‘medication’ I had at my disposal at that time of my life: going out and getting drunk. It’s from the perspective of someone reflecting on their lifestyle, talking about the time they spend trying to escape and impress other people. This track is about taking a step back and seeing this mentality for what it was to me — fun, but ultimately exhausting and damaging. The end of the song tries to encourage anyone in a bad spot that things can and do get better”.