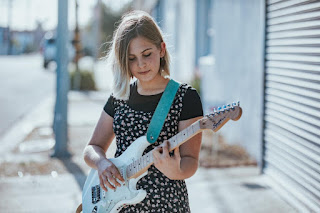 Melody recently announced she will release a new EP called Teachers Pet on June 12th via Lauren Records, and she's back with a new track.

Melody Caudill is a 16 year old singer-songwriter from Los Angeles, California. Coming from a musical family, and learning how to play piano at the ripe age of four, she’s been immersed in the creative world of songwriting since before she was in kindergarten. After picking up the ukulele at 13, learning guitar became the natural next step. With inspirations from artists like Priscilla Ahn, Phoebe Bridgers, and Elliott Smith, Caudill writes with a certain sense of vulnerability and confidence.

”Room 111” is about Melody's 8th grade English class/teacher who saw herself in Melody and made her realize the feelings she was experiencing were totally normal and actually really special. Or as Melody puts it, the song is about "the longing for familiarity, but also the desire to move on and not be that awkward, sweaty middle schooler anymore."

Ever since she could remember, Melody was always making up new songs. “It was never a question, I always did that.” Caudill shared about writing her own music. At the age of 12, she became enamored with music in a new way. She decided to record some of the songs she had written at 13 to keep as a makeshift time capsule for herself. After the producer told her she should consider releasing the music she had created, Melody did just that.

At 13, she recorded and released her first EP, Thirteen. Thirteen chronicles the life of a pre-teen navigating new life changes. Now 16, Melody has written her second EP, Teachers Pet. Teachers Pet captures the essence of what it’s like to be in high school dealing with issues of self-confidence and finding a sense of belonging. However, Melody isn’t to be boiled down to another angst-driven teen. Her songwriting touches the core of the emotional turmoil we all go through. Whether that’s feeling smaller than your peers or being afraid to show your true self, there are just some inner-struggles we never grow out of. 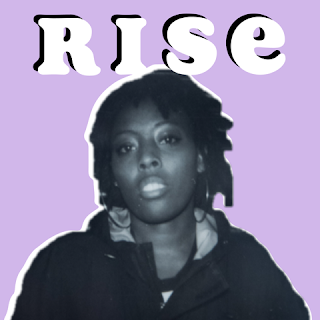 Amaroun is back with new single ‘Rise’.  It follows last months release of ‘Alive’, a collaboration with Mansa and produced by Boris Labant, and the March release of the Charles Watson (Slowclub) co-written and Charlie Andrews (Alt J/ Matt Corby/ Maricka Hackman) produced single ’Talk’.

Once again co written with Boris Labant, ‘Rise’ tells the story of a woman who is in doubt and in deep self hate but her inner positive voice breaks through telling her to rise, Jay (Amaroun) explains that "When you fall or get knocked down, do not stay down, do not let them hold you down, rise up, rise up against oppression. If you are marginalised, if you are queer, it’s hard out there! Tell your story proudly, see yourself, your change and your journey as beautiful and as growth. You are an ever changing authentic being so just be exactly that". 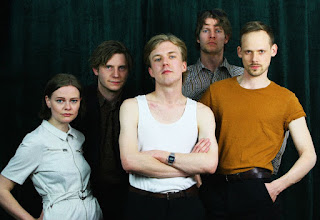 Cat Princess - These Boots Are Made For Walkin'.

Uppsala quintet Cat Princess formed at a New Year's party and debuted only days after playing at guitarist Robin's birthday party. Singer Nils joined the gang after the band heard him sing that same night. Just as spontaneous as the band's birth are their music. Last year Cat Princess' long-awaited debut album Forbidden Items was released on all platforms and limited vinyl. The album contained singles Rocko's Theme, Silver Socks and Sweet which have all received praise from as well Swedish media and international blogs.

The band is now back with a cover of Nancy Sinatra classic These Boots Are Made for Walkin’. A version that embodies the spirit of Cat Princess perfectly. Intense changes in tempo, aggressive guitar riffs and the unique voice of Nils Krång. When performed live the audience have quickly embraced the stomping beat and danced themselves sweaty.

The band tells the story behind the cover: “For every Rama Lama party we play we usually do a special cover. So just by tradition we did a surf version of this track for their third birthday party. We immediately felt that our version took this iconic track to a new level and simply felt we just had to record it ”.

Cat Princess' sound have been crafted since their 2016 debut EP Please Me which received positive reviews from Swedish magazines GAFFA and HYMN, stating that their explosive combination of modern indie pop and 80's art-pop channeled the spirit of David Bowie and Talking Heads. The band later signed to Rama Lama Records which re-released the EP on cassette. The quintet has since the EP shared stage with acts like OMD, Pale Honey, Magic Potion and Cloud Nothings as well as playing frequently on the Stockholm indie scene and a international appearance in Copenhagen and London.

Fly on Your Wall and b-side Marxist with a Twist followed in 2017, two fine representations of the band's live intensity and a powerful showcase of their uniquely flavoured indie pop which have been compared to the energetic early days of Franz Ferdinand. Front man Nils Krång's thrilling, almost psychotic, vocal performance adds something even more special to the band's unique sound. A sound which during the band's young career already has developed from the more standard indie pop-ish early singles to a fusion of 80's art rock and modern indie influences resulting in the danceable chaotic sound that's shown on the debut album.

Forbidden Items showed every side and aspect of the always renewing Cat Princess. From instant sing-a-long live favourite Silver Socks through mysterious Rockefeller Phoneline to dance-friendly and summery Sweet. The album took a majority of 2018 and a lot of obstacles had to be overcame to make it. The result is an eclectic art rock mix consisting, equally put together by the bands' influences spanning from 80s new wave to contemporary greats.

These Boots Are Made For Walkin’ is out now on all platforms via Rama Lama Records (Melby, Steve Buscemi’s Dreamy Eyes, Kluster B, Chez Ali etc.). 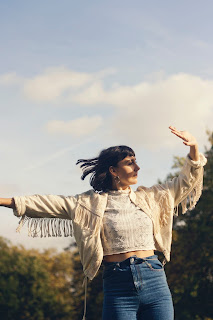 Grace Gillespie is a London-based artist and producer originally from Devon, who spent much of 2017 touring as part of the live line-up for 4AD’s Pixx. In 2019 Grace received PRS’s WMM funding and consequently released her debut EP ‘Pretending,’ which garnered support from the likes of The Line of Best Fit, Clash and Earmilk.

This year she has received support from the ‘Help Musicians’ ‘Do it Differently’ award, and is using this to release an EP in the autumn. Some of her notable live shows include supporting James Morrison at Dingwalls, Camden and headlining a stage the folk stage at Tipping Point festival in Newcastle. Her first two singles found their way onto Spotify’s ‘Fresh Folk’ playlist and received extensive support from Apple Music, appearing on their ‘A-List’ and ‘Best of the Week’ playlists, as well as backing from NME, Crack In The Road and The Wild Honey Pie.

She has received radio plays from BBC 6 music as well as being a featured artist on BBC Introducing London. Her early demo of ‘Restoration’ saw her tipped to Q Magazine by Newton Faulkner and brought her to the attention of Kaleidoscope, who worked with her to produce her first solo releases in 2018. Her sound takes influences from the folk, psych and dream-pop traditions, providing a backdrop to her intriguing vocal melodies, shifting harmonies and introspective lyricism.