Today, the Nashville-via-London duo Ida Mae announced their new sophomore album Click Click Domino, which follows their critically-acclaimed EP Raining For You and breakout debut Chasing Lights. The husband-wife duo Chris Turpin and Stephanie Jean has also shared the title track from the record, which features a blistering guitar performance from Marcus King. Click Click Domino will be released on July 16th, through Thirty Tigers.

Filled with thunderous production, killer riffs, and an insatiable rhythm throughout, "Click Click Domino" is among their most raucous tracks to date. Ida Mae writes, "This was written kind of as a knee jerk song. The unfiltered noise of social media, concerns surrounding social engineering, the lack of emotional connection and physical disconnection gets to all of us. We all know how easy it is to falsify an image, be it in fashion / politics / or any aspect of your everyday and in a lot of people's lives it has become a necessity to play into it. I wanted to write the lyrics to ‘Click Click Domino’ almost as Twitter statements, counting characters, making a short sharp stream of consciousness commentary."

"The riff was originally inspired by the playing of one of our favourite guitar players Pop Staples and it slowly morphed into something that in my mind almost echoed moments of Peter Green’s Fleetwood Mac. It kicked up a gear when Marcus King came over and we stood side by side, soloing call and response guitar lines over the outro. The attitude of his playing was perfect."

Adding to this Marcus King says, "A warm summer Nashville evening, enjoying a whiskey beverage with my lady and two of our best friends in town, Chris & Steph of Ida Mae. I listened through the track ‘Click Click Domino’ and was immediately floored by the raw nature of the recording, the intensity and the undeniable, delightfully British rock sound I had grown up being captured. I’m honoured to have played on this track. What a powerhouse album and what a powerhouse band." 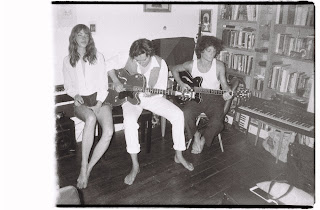 Talking on the track, the band add “I Don’t Wanna Move is a duet between Chris & Lewis  about desire, the song plays out like a town crier’s rhapsody with all the ancient laments, hopes and dreams of a wayward rake, or a seaworthy mariner rolled into a blanket of harmony.”

Over the past twelve months, Oracle Sisters have built up a loyal and global following, blurring the lines between music and visual arts. Now, Oracle Sisters turn their attention to its sequel, their next EP ‘Paris II’ , due for arrival on April 7th. Building upon their first EPs thematic premise of music lifted from a utopian vision of the French capital (where the band are currently located) the upcoming body of work shows the duel side “of that world...coming back down to earth to explore the darker sides of the psyche while probing some allies of hope” add the band.

With members hailing from across Europe and the UK , the band are uninhibited in their influences, finding inspiration within the art, cinema, philosophy, and music of the world over; resulting in a sound that is both sonically sophisticated and warmly familiar. Lyrically, they explore timeless narratives of love, mysticism and spirituality, scattered with intriguing insights into their own personal lives and experiences resulting in songs that are cryptic yet inviting.

Oracle Sisters have been working hard in Greece currently finishing off their debut album. Along the road, they’ve also played impromptu shows on the island of Hydra with friends from Fontaines D.C & The Murder Capital   – capturing the troubadour spirit of the band. 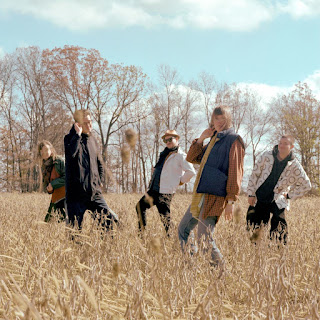 Today, ahead of the release the band are sharing the album's final single "Lone Swan."

"When we think of swans, we think of them coupled, distant, on water - beautiful, peaceful, sailing," says Bernice leader Robin Dann. "We know them as aggressive, hissing, dominating, at odds with our world. Lone swan feels conflict, curiosity, and longing. On a deserted road, city street, snowy mountain, suburban pool, forest, nightclub, airplane, crop circle, cloud - she absorbs as much as she releases. She doesn’t quite fit in anywhere she lands, wonders what is real, and her longing for connection carry her forward one webbed foot at a time."

Eau de Bonjourno is the Bernice's first collaboration with producer Shahzad Ismaily, the acclaimed multi-instrumentalist who has worked with artists as varied as Laurie Anderson, Lou Reed, Elvis Costello, Iggy Pop, John Zorn, and Bonnie ‘Prince’ Billy. While their genre reconstruction remains distinctly Bernice, Dann’s lyrics bring a newfound focus to storytelling in the present moment, compassionately meeting ourselves where we are, and finding joy in spaces that are familiar but ever changing.

Eau de Bonjourno, according to Dann, “openly plays with the shape of a pop song,” drawing on the band members’ backgrounds in jazz, subverting rhythmic formulas, and resting in grooves that sit just outside of predictable. Instead of letting instruments take extended solos, the tone is set on opener “Groove Elation” with brief blurts of synthesized sax, patient passages of space, or clusters of beats, tenderly held together by Dann and Williams’ intimate vocals. The album’s sound is experimental in its truest definition, chopped up like musique concrète and then delicately placed back together with the loving touch of a scrapbook collagist.