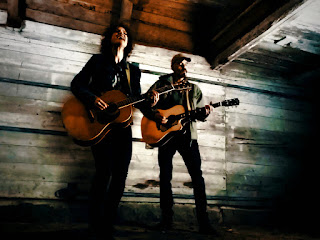 On Black Oak, Swedish Molosser go for a lighter touch and lean more towards singer/songwriter and Americana than on their earlier singles. The core of the music is still their trademark interplay between two downtuned, acoustic guitars and the strong, intimate vocals of singer Tess.

Tess and Jahn of Molosser found each other in Gothenburg, Sweden’s second largest city and home of a lively music scene. There, both were playing in various bands and constellations, mainly of the loud and noisy variety. After a while, though, they moved to a small farm in the province of Småland, where they found themselves in the company of a couple of horses, an American bulldog, a gang of cats, some chickens and three sheep.

They started making music on their acoustic guitars, and lacking a bass player they tuned them down so they could share that duty between them. The music that emerged is colored by both their urban past and their current rural surroundings, a bit like when the blues moved from the delta to the city and got electrified, but the other way around. The nerve and drive remains, but have widened and grown to fill the windy woodlands and dusty, open fields as well as the deeper darkness beyond the edge of town.

Molosser’s music springs from a tight-knit, symbiotic relationship outside the music as well as inside it. It is built around the interplay between the two downtuned guitars, the intimate vocals, strong lyrics and meticulous, creative songwriting. Rather than using traditional acoustic guitar techniques of strumming or fingerpicking, Molosser weave deceptively simple and minimalistic lines and riffs into dancing, rolling patterns. Tess’s vocals add one more voice and deliver strong, poetical and highly personal lyrics, and on the studio recordings her drums make this little unit into a complete band. Any virtuosity involved is less about dexterity or speed and more about composition, arrangement and balance. One of the foundations for Molosser’s music is having access to two rather different musical temperaments, intent on creating a common territory – not necessarily a middle ground but rather a wide, including landscape. 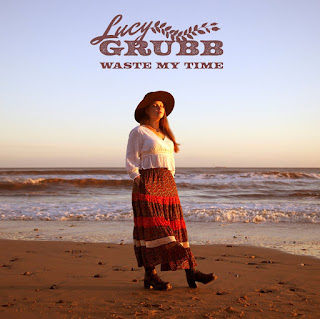 This track is one of the few songs that I have written which seemed to just fall out of my mouth. It was a very quick process from beginning to end, and the pieces seemed to fall together effortlessly. That’s how I remember it anyway.

When I wrote this song I believed I was writing it about a friend of mine who was going through a difficult relationship and I wanted to write it from her perspective. I imagined her listening to it years down the line, singing the lyrics in her bedroom, and that felt inspiring to me. She’s a strong person and I wanted her to know that.

As I listen to the song now, in an almost post pandemic era, the song means something different. It represents strength and resilience and being OK with not being in control of everything.

It’s learning to live with the cards you’ve been dealt with and knowing that you’re doing your best, and you’re not wasting your time. But maybe your best friend needs to know that the guy she’s been crying over is definitely a waste of time.

“I am now officially a dad!” announced Muca to the world recently. And the timing couldn’t be better for him to celebrate the birth of his firstborn with a delightfully sunny original composition which nods respectfully to an era in Brazil where Bossa Nova ruled the airwaves and Rio and Pele were the hottest cultural touch points of a growing industrialised age.

Murillo Sguillaro better known as Muca is a Brazilian musician and producer living in London who has built a modest following which looks set to explode once his new musical adventures unfold in the coming months. With ‘Until We Meet Again’, this outstanding single from London-based composer and producer Muca, and singer-songwriter Alice SK offers up a refreshed Bossa style piece where Muca’s Brazilian roots meet the indie-folk vibes of the young singer from London. Muca just finished working with Alice SK on her debut EP, he thought her voice would suit perfectly the genre and invited her to write the lyrics and sing along.

The track features a more than exceptional guest: Roberto Menescal, one of the pioneers of Bossa Nova, who brings his acoustic guitar rhythm into the mix. Muca went to Rio de Janeiro specifically to meet Menescal and record the track with him. But the partnership started much before, when Menescal came to London on tour and the two exchanged ideas and their shared appreciation for Brazilian music and beyond.

Once the song was recorded in Rio, Muca and Alice SK worked on the final arrangements and vocals in London. The track is accompanied with a making-of, directed and filmed by Eduardo Binato, showing Muca and Menescal in Rio working together on the recording process and also Menescal talking about the history of bossa and how it all started. The combination of Alice SK’s atmospheric, soulful voice and Muca’s fine skill of fusing the old and new was the recipe for this fresh and unique piece of music. 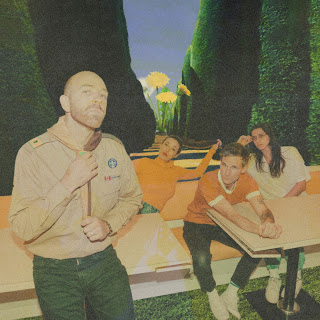 Said The Whale - Show Me Everything.

Said The Whale have earned their place in the Canadian music pantheon. They’ve won a JUNO Award, topped the alternative radio chart, and amassed a devoted base of fans who affectionately describe themselves as “SaidHeads” — all the while maintaining their resolute independent spirit. Now, more than a decade into their career, the Vancouver group are opening their most ambitious chapter yet.

Throughout 2020, lockdowns meant that the band members were at home, away from the relentless touring cycle that had defined most of their 14-year career. Singer-songwriters Tyler Bancroft and Ben Worcester, plus keyboardist Jaycelyn Brown and bassist Lincoln Hotchen, threw themselves fully into working on new material with producer Steve Bays (Hot Hot Heat) at his Tugboat Place Studio, resulting in the most towering, maximalist music of their careers.

“Steve is an incredibly detail-oriented producer,” says Tyler. “We would work until four or five in the morning. Then sleep at his house and work the next day until late into the night. It was exhausting, but each song came to life in such an amazing way with so many layers.”

Stately piano, roaring guitar distortion, giant-sized synths and orchestral flourishes — every moment blooms with bright, vivid sounds and subtle details. But in spite of the grandiose arrangements and go-for-broke production quality, the new songs are, at their core, classic Said The Whale. Lead single “Honey Lungs” is a bright and bubbly anthem, its crunchy rock swagger shot through with frenzied drum fills and sugar-spiked pop singalongs.