Background from the band - We're a sub-arctic indie rock four piece from Whitehorse, Yukon. "Yesterday" is out now on Coax Records from our self-titled LP to follow on June 25, 2021.

It's a visceral song about living grief, and the helplessness of loss, reconciling the death of someone who's still alive.

"Yesterday" has evolved to include and acknowledge the grief from physically losing others in this past year to addiction, and the realization, I will never be able to say goodbye.

The video emphasizes the inherent vulnerability of the song because it's made entirely of my grandmother's personal super 8 footage from the '50s and '60s. Head over to YouTube to watch and subscribe. This song is a slow burn rock song, for screaming into the void, or for taking shelter from the storm. 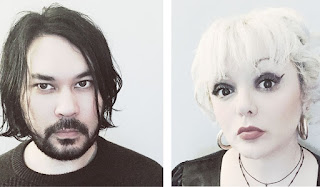 Glasgow based darkwave/post-punk duo Hanging Freud have just unveiled their sixth full-length album Persona Normal. The band states: "We were living between the UK and Brazil, going back and forth. These were two societies going through extreme change. The whole world was changing in a way that felt scary."

Some themes of Persona Normal deal with detachment, dissociation, what it means to be human, political issues and about strong, irrational cults. These are approached in tracks like “I beg you” and “We don’t want to sleep”. Persona Normal is also a record about transformation, and growth, accepting losses and coming to terms with the loss of innocence.

Persona Normal is available now in physical and digital formats on HANGING FREUD's label, Tiny Box. Persona Normal was written produced and recorded by the duo with mastering duties from James Plotkin (Khanate).