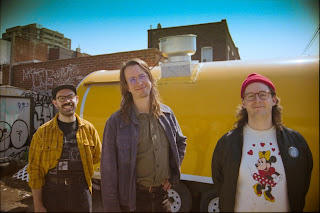 Motorists - Through To You.

Toronto's motorik jangle-pop trio, Motorists have just shared their new single, "Through To You" which arrives with an accompanying video inspired by the German TV show, Beat Club. In tandem with sharing the new music, the band are announcing their debut LP, Surrounded which comes mastered by Mikey Young (Total Control, Eddy Current Suppression Ring) and is set for release via We Are Time – a new label, part-helmed by Chandra Oppenheim – Bobo Integral and Debt Offensive on September 3, 2021.

Driving is a huge part of rock and roll’s enduring mythology. Images of cruising down the highway with friends and lovers while basking in the freedom of the open road pervade pop music’s lyrical canon. Yet, so often, these idealized images clash with the everyday drudgery of being a motorist: traffic jams, detours, and bad news on the radio.

This tension is central to Surrounded, an album that is as much about the colourful possibilities of life as it is about the way those possibilities are boxed in by technologies. In a world where everyone’s been in their own bubble, Motorists have pushed theirs together and worked through feelings of isolation as a group to the tune of jangly guitars, infectious power-pop hooks, and a steady motorik beat. Surrounded is an album about modern living and, as Fahner succinctly describes, “isolation in a technologically saturated society, laden with romanticism around radical togetherness.”

The album's first single, “Through to You”, is a song about yearning to connect with other people, attempting to peel back the curtain of solitude that has engulfed us over the last 15 months or so. Written during the first lockdown, when hope for a bit of familiarity was starting to blossom, it zeroes in on the desire to feel close to someone without having to speak a word. The band addresses this notion beautifully, both lyrically as a feeling of “flowing through the veins of another heart,” and musically with the brightest jangly melodies on the album and a wistfully sweet vocal.

The LA-Based, French-American Psych Pop Duo Pearl & The Oysters have just shared a video for "Soft Science". Flowerland is the third album from them and will be available September 3rd, 2021 via Chicago’s Feeltrip Records.

With the band having recently relocated to LA, the album was intended as the final installment of Pearl & The Oysters’ ‘Florida trilogy,’ begun on their self-titled debut (2017) and continued on Canned Music (2018), a space age odyssey equal parts fawning over the Floweredland’s natural spectacles and mourning the peril that climate change has wrought on it all.

In comparison with previous releases, Flowerland reveals more of the inner workings of Davis and Polack’s minds, with the pair trading fantastical stories about zany characters for more personal narratives detailing worries of the everyday and universal variety. While the music remains primarily indebted to the escapist optimism of late-1960s soft pop, cloudier themes such as eco-anxiety, depression, and the stresses of finishing graduate school are all explored (somewhat cryptically) in the lyrics, although never in an overwhelming way. For Davis and Polack, Flowerland was meant as an attempt to channel crippling emotions into an uplifting listen, rather than a deliberately heavy experience.

P&TO’s take on Richard Tee and Stuff’s mellowest moments, the title track is in keeping with the band’s extended space opera metaphor seeing Florida become a foreign planet on which Davis and Polack crashed—rather than safely landed—, an unexpected but ultimately lucky detour. In the admittedly semi-autobiographical opener « Soft Science, » the band tries their hand at nouvelle vague romantic candor, in a duet staging a lovers’ trivial but tender argument, backed by samba-inspired percussion and phasing electric piano swirls. « Evening Sun, » one of P&TO’s more affected and pessimistic tracks to date, turns the ‘Endless Summer’ trope on its head by contemplating the concerning proposition hidden (in plain sight) behind what was once as a catchy slogan for tourism: when is the paradisiac promise of an eternal Summer actually becoming a dystopian menace? With its reverb-drenched flutes and whirling analog synthesizers, it is without doubt the album’s most cinematic cut. 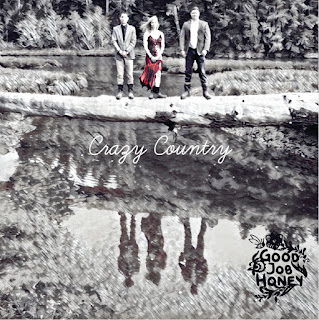 Is the reward worth the risk? Sometimes all you need is to stray away from the beaten path, take a leap of faith, and follow your heart. West Coast-based folk band Good Job Honey invites you to take the leap of faith in search of adventure in their latest single, “Crazy Country.”

A track reflecting on the universal woes we in society all live through, the band speaks on life and its trials and tribulations over a country inspired melody. The song illustrates embracing the risk of following the unknown path with the hope of a greater reward at the end of the unclear journey. Good Job Honey releases “Crazy County” on all digital platforms now.

The third release from the band's long-awaited debut album, Why You So Sticky, out July 30, 2021, “Crazy Country” showcases the band's versatility and sonic style. Written by a family member, the track shines a spotlight on lead singer April Roberts' commanding and delicate voice. Good Job Honey aims to let their unique sound be heard while inspiring others to live their authentic selves.