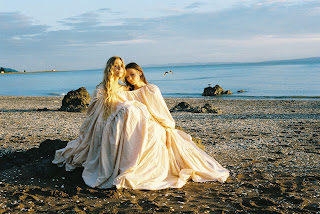 Sister duo Purple Pilgrims have released the third part of a trilogy of Super 8 films that were made with friend and fellow musician Gary War. ‘Ancestors Watching’ is taken from the band’s album Perfumed Earth which was released via Flying Nun Records in what seems like another world; pre-pandemic. Due to one thing or another the sisters were delayed in releasing the third instalment, then with the emergence of Covid-19, it was temporarily lost to the archives. This is the final piece of Purple Pilgrims’ current story left to share.

“The video is our take on an ancient ritual. We were thinking about folkloric traditions, and of course our ancestors. The song is largely about being kind to oneself, and the idea that muddling our way through life can feel less daunting when we consider all our family branching out behind us, holding wisdom and strength. It’s an idea that can offer comfort when we’re feeling lost. We had this really simple idea loosely based around a maypole dance - the ancient celebration of oncoming warmer weather and new growth. May celebrations are so optimistic, always looking forward - which felt fitting as the song itself is about a new beginning too in a way.”

this video was filmed by Gary War in the summer of 2019, freely on a hillside in Tāmaki Makaurau, with their ancestors watching on (amused we presume). Concept and art direction by Clementine and Valentine Nixon and makeup by Jessica Hunt.

As Purple Pilgrims, sisters Clementine and Valentine Nixon make music that is at once spacious and sensual, swooning and spellbound. The sisters’ intertwined voices soar and slow dive, radiating a rich spectrum of experience: journeys, homecomings, and great longing. 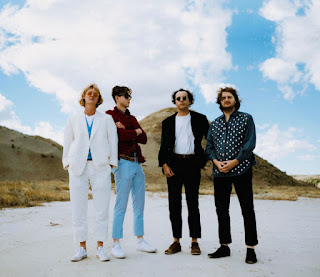 Soaked in the bright psychedelia of the 1960’s and dipped in the indie rock explosion of the new millennium, The Velveteins are best described as a bridge between the two. Inspired after living out of a camper van on the beaches of Australia for a year, frontman Spencer Morphy returned to Canada and started the band with co-songwriter Addison Hiller in 2014. Later joined by Dean Kheroufi and Danger Sedmak, the foursome have since made a name for themselves for their incendiary live performances.

Radiating hazy energy, “Cosmic Saturation” has a trippy, laxed aura with a structurally, pop-rock sensibility. The vintage twangs on the guitars surf over an ocean of edgy, quirky melodies and soft drums that lend to a more modern indie feel. The vocals maintain a relaxed feel allowing the subtle, psychedelic atmosphere to stand out next to charming, gritty guitar riffs.

While travelling across the USA, the band were exposed to a colorful palette of sights and sounds, with a fusion of delirium, euphoria and chaos spinning the web of inspiration for their new single. Morphy shares, “Cosmic Saturation was largely inspired by our lives at the time, being constantly travelling and the lifestyle we were living playing so many shows. Driving across the country from the east to west coast, watching the interstates fly by in the dawn.” Keeping the themes of their tracks very much in the present day, their sonic taste buds draw them back to the classic flavours of the 60s, resulting in a throwback sound reminiscent of Babe Rainbow, Foxygen and Deerhunter. 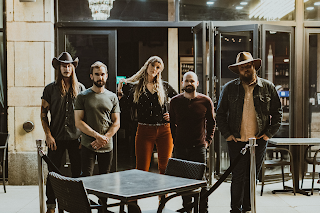 Minnesota based folk turned genre-bending Americana-Newgrass duo Maygen & The Birdwatcher, have just released "Jigsaw," the track is an "honest look at the dynamics of what family life really is.

Maygen Lacey is an accomplished, Midwest CMA nominated singer/songwriter with millions of streams on Spotify from listeners around the world. Noah Neumann is a wicked talented guitar virtuoso with a taste for Delta Blues. The combination of the two is Maygen & The Birdwatcher, an indie-folk duo turned genre-bending Americana-Newgrass and Soul experience you need to hear!

In many respects, Maygen and Noah couldn’t be more different. From upbringing and musical taste to the Minneapolis vs Saint Paul debate, there are few things these two agree on. The short list includes: sarcasm, the great outdoors, quality beer, and having a good ‘ol time. Maygen & Noah’s 2018 debut album, “The People We Don’t Choose,” drew on their distinctly different musical influences including Brandi Carlile, Florence + The Machine, and Balmorhea to create a collection of songs that explored family, addiction, loss and navigating the people in their lives. With heartbreak and hope intertwined throughout, it was very well received. Its single, “Comeback” currently spins on local radio, including The Current’s Radio Heartland 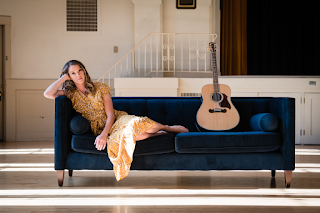 Utah-based country meets Americana singer-songwriter Alicia Stockman has released her new single "Stay Between The Lines." Conceived during a long journey home on the highway from New Mexico, the song is a reflection on how we all can sometimes “dance between right and wrong and personal limits and boundaries to keep life interesting.” Featuring a twangy Americana melody, reverb-drenched guitar, and dynamic vocal harmonies, this is the perfect tune to get lost in during your summer road trip.

Alicia Stockman is a Utah-based folk-meets-Americana singer-songwriter whose music pulls back the veil to reveal everyday vulnerability. Her songs are written like intimate moments, drawing listeners into a relatable emotional journey.

At a young age, Alicia Stockman began her deep love for music, compelled by the vivid storytelling of powerhouse songwriters including Patty Griffin, Brandi Carlile and Jewel.  After performing in a loud rock n’ roll band playing bars with sticky floors and belting out Stevie Wonder tunes, Alicia began writing her own music more seriously.  Realizing her new songs didn’t have a place in a loud bar with a party atmosphere, she branched out and started playing more intimate venues, quickly finding her home in the folk and Americana scene. Her whisky-dipped soulful vocals and creative takes on day-to-day realities soon sparked the interest of “Nashville’s Americana Queen” Mary Bragg who began collaborating with Alicia on her new album.

Her upcoming debut 10-track full-length album is entitled These Four Walls and is a collection of  "songs to make you feel and feel seen." The album says, “I see you. I've been there. I understand.” Written over a three year period, These Four Walls is a luminous roots release  infused with gritty blues rock guitar licks and attention worthy melodies. 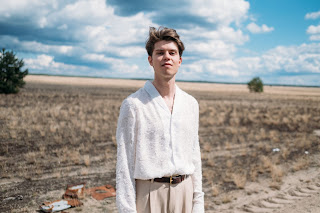 After his two singles "Mountain" and "Morning Sun", M. Byrd now releases his first EP titled Orion - four songs full of vastness and warmth, carried by the feeling of passing trees outside a backseat car window and the melancholic homesickness that sometimes goes along with. Just one year ago, the first sign of life appeared with "Mountain" and the interim summary is impressive: M. Byrd has become one of the most exciting newcomers on the European music scene, counts 3.5 million streams on just two songs, was recommended in the French Rolling Stone as well as in American blogs. This summer he plays at tastemaker festivals like Immergut, in September at the Reeperbahn Festival and next year he will support indie dance king Roosevelt on his full European tour.

Wafting reverb tails, the casually stoic drums - Byrd's music sounds like Guadagigno's "Call me by your name," at times reminiscents of Tom Petty, Sufjan Stevens or Kurt Vile, while the guitars first sound like Sonic Youth and then fade away like The War on Drugs. In the title single, "Orion" M.Byrd remembers a long-time-nameless turtle that lived with his family for years - without anyone being bothered by the fact that it has no name. In the end, it is named Orion. "It's living in the past, you held me in your hands and never called me Orion". In the accompanying video, director Constantin Timm accompanies the artist and turtle on a journey through the desert.

M.Byrd’s timeless songs shine with a feeling of strength and self-understanding that can be rarely found at the beginning of a young musician’s career - they transport the listener to the American west coast, emitting a sense of melancholic future and euphoric youth, urging them to trust their intuition and find their inner-self. “I spent many years soaking up personal and musical experiences and I’ve been learning a lot in different studios and touring situations. The music I make is thus inspired by being on the road, moving on and allowing growth to happen. I realized that the experiences on my path might also inspire other people and I hope that this will continue in the future with the songs we release.”