‘Modern Justice’ is the 2nd song in a trilogy of new tracks with accompanying videos directed by Matthew Thorne. It is a closer look into a series of gritty, grubby, thought-provoking vignettes filmed in Eastern Europe in stark but nonetheless nuanced contrast to the bright lights and sleek surfaces of the songs.

“This song is about the strange and almost perverse situation, wherein one is sat here in the center of Europe where things could be considerably worse, and reading, seeing or hearing about the immense amounts of injustice inflicted upon people around the world. Modern Justice’s’ original inspiration was a different kind of power imbalance: the demonstrations about democracy in Hong Kong and how screwed they seemed and, it turned out, were. Worst of all, the disheartening realisation that to some extent, you’re completely disconnected from it, sometimes even stimulated by it.” In close connection to the statement of the song the music video for ‘Modern Justice’ documents the lives of young Bulgarian bodybuilders who nonetheless remain powerless.

Drenched in 80s synths rewired for the 2020s, ‘Modern Justice’ is a bold statement of intent from Berlin-based duo Sweet Tempest. Musically recalling artists like Lykke Li, Little Dragon and La Roux, with Pet Shop Boys’ literate pop and Stevie Nicks’ otherworldliness among further crucial ingredients. The meaning of the song with the accompanying video is indicative of how Sweet Tempest never shy away from difficult topics, whether political, social, or indeed personal.

Contradictions surround Luna Kira and Julian Winding, originally formed in Copenhagen. Aside from that ambiguous moniker, there’s the fact they want people to dance to songs about inequality and prejudice, and the way those songs are sometimes superficially frigid yet always warm-hearted beneath. If you ask them who inspired them, too, they’re as likely to point to Tom Waits as Ace of Base (though only the latter’s first album. It’s important to make that distinction.) And then there’s their personal history, an ‘Are they? /Aren’t they?’ soap opera which went on for over a decade. 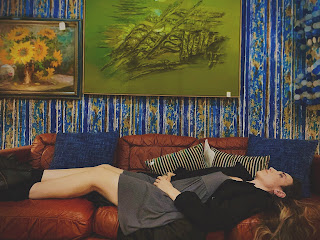 Indie Rock musician Faye has released her latest single “Alexandria.” The song is about being in love with someone you can’t have. In an age of heavy production, Faye embraces an authentic garage sound with a focus on lyrics and a raw vocal that blends with smooth electric guitars and drums as she sings of Alexandria, the girl we’ve all wanted to be at some point in our lives.

“This one night, I came back from hanging out with the guy who was in love with Alexandria. I was really sad, because he would tell me all of these things, compliment me, and basically lead me on, and then run right back to her,” says Faye. “But I sat down —  it was like, 1am, and this idea for a song popped into my head which was to not make it about me being sad or losing the guy but to revolve the story around her. I wrote it in about 15 mins. It’s definitely one of my more vulnerable songs.”

“Alexandra” was written and performed by Faye and produced by Jon Fintel at Relay Recording and features Jon Leonard on guitar, Jared Knutson on guitar and drums, and Jenna Jaworski  on bass.