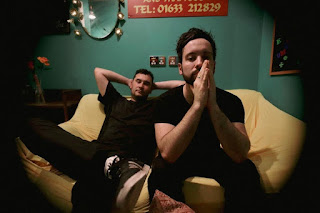 Forming in 2018, their first year saw them release their hauntingly beautiful debut EP ‘Maiden’, soon followed up by their sophomore EP ‘A Glossary of Broken Humans & Beating Hearts’. Their third studio EP 'Sanctuary Lines', described by Atwood Magazine as a "heart-on-sleeve exhaust of emotion" was released in June of 2020.

Pirouettes - recorded, mixed and mastered with long-term collaborator and producer Josh Gallop (Phoxjaw) at Stage 2 Studios in Bath - is a playful insight around the concept of karma and the fragility of modern day brain health. ’They’re probably thinking this scene is senseless as well’ encapsulates the track’s theme and the idea that everyone is just as clued-in or perhaps as clueless as the next.

“It’s how we present this to one another that seems to be a great irony”, says frontman and lyricist Noah Villeneuve, who throughout this track, shows an unwavering ability to move between sugary-sweet power-anthem choruses and moments of lyrical tenderness.

Musically, Yard Arms are demonstrating what has become somewhat their signature ’sound’ in this track, evoking the classic 80s influence of The Cure and Echo & The Bunnymen with more present day indie acts such as The National, Bleachers and Death Cab For Cutie. A short two minutes-thirty burst of pulsating indie pop melancholia with synth laden, alt-romance-rock. The accompanying music video follows the band throughout their most recent UK run of dates alongside the likes of The Slowreaders Club, Phoxjaw, The Nightmares and The Inspiral Carpets’ Tom Hingley. 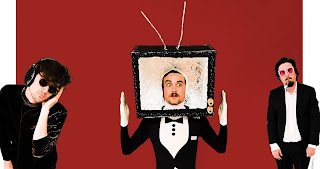 The Chicago-based project of brothers, Nolan and Carter Dickson, Noir Disco, are today sharing the video for "Settin' Sons" alongside the release of their debut album, NOW! 2073 which is out now via Terrible Records (Hubert Lenoir, The Voidz). The new single which closes the album follows previous support from Brooklyn Vegan, Northern Transmissions, Clash, Pigeons and Planes and more. It further cements the trio's spellbinding take on punk, psych-rock, indie-rock and electronica forging a truly unique sound.

"Settin' Sons," which premiered via Under the Radar Magzine earlier today, opens with spangled acoustic guitar before erupting into something bigger introducing warbling electric guitar and programmed drum beats. It finds the trio leaning into their psych-rock-adjacent sounds more than anywhere else on the record, producing one of its more tender, introspective moments.

Speaking about the making of the new single, the band explains: "The song is Carter’s take on what NOW! 2073 opening track ‘workCHANGEchangeWORK’ means to him. Carter wrote "Settin' Sons" on his guitar and then began recording it with Henry, after which Nolan, who happened to take mushrooms about an hour before they started recording, stumbled upon the guitar takes and began to add every other instrument without thinking about it, to which Carter & Henry came home, looped the improvs then structured the song. Carter’s vocal recording process on Settin Sons was a special moment for the band because it was then we realized that Carter is Rocky, Nolan is Mick and Henry is Pauly, characters from the American classic movie series Rocky."

The brothers who sing and play alongside their friend, Henry Miller have developed something of a cult following over the year; NOW! 2073 marks their grandest project yet, signposting the band’s evolution into a new freeform way of creating. Taking direct inspiration from artists like David Bowie, Kate Bush and The Doors, the new music similarly submerges you in cartoonish art-pop landscapes (think “Happiness Is A Warm Gun” if it was made by Arcade Fire during their Reflektor era) that seem to evolve in real-time.

North Mississippi Allstars will release Set Sail on January 28th via New West Records. The 10-song set was produced by Luther and Cody Dickinson and follows their Grammy Award Nominated 2019 album Up and Rolling, which was met with wide critical acclaim. Set Sail features an appearance by Stax Records legend William Bell on the album standout “Never Want To Be Kissed” (which Bell also co-wrote and co-produced).

After 25 years, twelve albums, four Grammy Award nominations, and sold out shows everywhere, North Mississippi Allstars open up their world once again on Set Sail, welcoming other family into the fold. As sons of the legendary producer and musician Jim Dickinson, Luther and Cody Dickinson started the band in 1996 as a loose collective of like-minded second-generation musicians who shared a local repertoire and regional style. Over the years, the lineup has shifted by design, and with Set Sail, they mined the talents of Jesse Williams on bass and Lamar Williams, Jr., the son of Allman Brothers bassist Lamar Williams, Sr, on vocals. During the Allman Betts Band Family Revival, the Dickinsons first linked up with Lamar, becoming fast friends and collaborators, paving the way for Set Sail.

“The chemistry we have with this lineup is powerful,” observes Luther. “We are all second-generation musicians and share a telepathic, relaxed ease about creating and performing. I believe music is a form of communion with our loved ones and conjuring this vibe with members of musical families can be inspirational. Lamar and I are like-minded. I’ve never had the pleasure of working with a singing partner like Lamar. He has a true-blue quality in his musicality that will pull you in and break your heart. At the same time, Jesse grew up playing music with his brothers and his father—as did we. He plays like a sibling. I’m drawn to musical families, regardless of style. Playing with second- or third-generation players allows us an easy unspoken musical dialog. It’s not a big thing; it’s just what we do. We never had to figure out what it means and takes to be a musician. We all inherently know.” He continues, “Each generation has to reinvent itself and shed the skin of the elders. On Set Sail, we feel as if we’ve once again ‘broken the code,’ and know what we want and how to get it.”

Today, Holler premiered the video for the album highlight “See the Moon," saying "Like the timely arrival of superheroes. Just when you needed them most, North Mississippi Allstars return with a lively injection of positivity and uplifting roots funk to rescue us all." Of the song, Luther Dickinson says “The last verse was improvised in the studio, on the mic, and touches on our belief that music is a celebration of life. It’s a joy to sing with Lamar Williams, Jr. and Sharisse Norman.  We have been touring hard, and are so grateful to be back on the road. Music is essential and we are honored to serve." See the “See the Moon” video directed by Joshua Shoemaker. 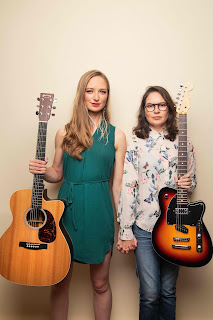 LA-based folk pop duo Winter Grain released their new EP, Hollywood & Hard, along with focus track "Pages." This marks the second project with Grammy award winning producer Ryan Hadlock (Brandi Carlile, Vance Joy, The Lumineers.) Winter Grain consists of married couple Kate and Secily Anderson, who found love with each other shortly after experiencing the chemistry between themselves as musicians/collaborators, and then as humans.

Hollywood & Hard was recorded at Seattle’s Bear Creek Studio in October 2020, with the help of musicians Elliott Klein (electric guitar,) Taylor Carroll (drums,) and Dune Butler (bass,) with guest features from Adam Neely (bass on “Pages”) and Ryan Hadlock (mellotron on “Pages.”) This marks the first release where Secily and Kate can finally call themselves a duo, confidently claiming Winter Grain for themselves. They felt that “In the past, we had both been set on letting a large group of collaborators define who we are and we finally found the time to come to terms that this project is mainly the two of our hearts.”

With influences ranging from Bonnie Raitt, Fleetwood Mac, The Milk Carton Kids, to First Aid Kit, Kate and Secily trade off vocals that weave together stories of nostalgia, growth, frustration, love and all the in-betweens. The anthemic single “Fists” is a timely call to action released in January of this year. Kate Anderson explains, “With all of the political turmoil and civil unrest, we both felt the growing importance to not only point out the tensions, but remark on how easy it is to let something good like a spark turn into something destructive. It became a song that tried to capture both our sadness and our hope.”

Using music as a cathartic outlet, Kate wrote the acoustic country ballad, “Passenger Seat” in remembrance of the 3 years her biological mom left her family from the pivotal ages of 9-12. Winter Grain comments that when they perform this song, it “captures both joy and sadness: joy of a mother who realized her kid wanted nothing more than to be with her mom, sadness of a kid whose mom took three years to turn the car around." While coming to terms with leftover emotions, Kate was able to find closure in the moment her mom told her the song had become one of her favorites. Her mom said that "she could really hear how badly I wanted to be in the passenger seat,” Kate explains. "I just cried in disbelief, as I had very intently meant to convey the sadness reflected in that empty seat."