Portland, Oregon based country-soul group The Delines share the third single and music video from their upcoming album, The Sea Drift, which will be released on February 11, 2022 via their new American label home Jealous Butcher Records. The new song, titled “Kid Codeine”,  has a 60’s pop feel and is more upbeat than previous singles; but the song captures the same weary world and deep, wistful emotions that musician and author Willy Vlautin has become known for.

The song is accompanied by a music video starring The Delines lead singer Amy Boone, walking around the streets of the band’s hometown of Portland with her hair done up just like the song’s titular character “Kid Codeine”, who has a boyfriend who is a boxer and is described as always wearing a perfect bouffant hairdo “just to walk down the street”.

Speaking to the real life inspiration to the character of “Kid Codeine”, Willy wrote: “Years ago in Los Angeles, Richmond Fontaine was playing at a club downtown called Al’s Bar and after the gig the bartender invited us to a strip joint. She was maybe thirty-five and had a big bouffant and a twenty-one-year-old boyfriend who never said a word. Nothing. It was almost like she had him on a chain. She took us to a place where the dancers come to your table.

The woman who came to ours was a friend of hers but a junkie and nodded out and crashed into our table. Drinks spilled everywhere but the bouffanted bartender got hers out in time and she and her boyfriend got up and she said, “I gotta run but bet the third horse in the fifth race at Hollywood Park tomorrow.” Man oh man, she was really wild and she drove the coolest car and nothing seem to phase her. I hadn’t thought of her in years but during the time I was writing The Sea Drift tunes I just woke up one morning and she came to me and I wrote the song.” 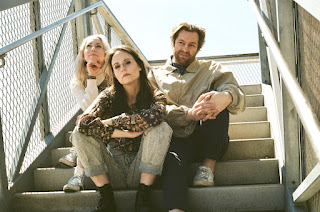 New York City trio Colatura released their latest single, “Team Sport,” last Friday, to announce their debut album, And Then I’ll Be Happy, for an April 22 release. The band will celebrate that night in Brooklyn, at The Sultan Room.

Featuring the triple songwriting attack of Jennica (bass/vocals), Digo (guitar/vocals) and Meredith (guitar/synths/vocals), Colatura has been called, "Fleetwood Mac with shoegaze guitars," by Fadeaway Radiate, and described by Popmatters as, “Drawing on a range of influences from '50s female-fronted outfits to Manchester post-punk and all manner of noisy things, Colatura sounds both of and out of its time, delivering music that seems to have always been.”

Sonically, their foot is in a number of genres, writing music that is sometimes dreamy, sometimes heavy, with pop-leaning melodies and post-punk atmospherics.

Discussing “Team Sport,” Colatura calls it, "A sad song that sounds happy. It's a feel-good tune until you start to listen to the lyrics… 'who knew drowning was a team sport?’. The song is about two people who try really hard to make a relationship work but can’t seem to, despite their best efforts. It explores the difficult reality that in many relationships both people want it to work, but can’t seem to get on the same page, and in trying to make the other person happy, both end up feeling like they’re drowning.” 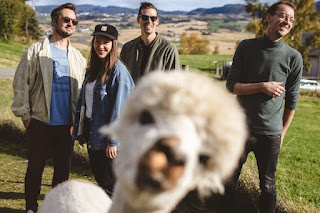 Onsloow's eight-track, self-titled album sees release digital release via How is Annie records on January 21, 2022. The Trondheim, Norway's band is a fresh, well-crafted indie rock band that creates rousing and dreamy powerpop sounds with nuances and nods to pop punk.

The sweet, feminine energy of Johanne Rimul's charming vocal work mixes confidently with the confident and ferocious playing of guitarists Mathias Nylenna, bassist Lasse Berg and drummer Morten Samdal, and finds the band in league with contemporaries like The Beths, Tigers Jaw, Girl In Red and Paramore, and even Superchunk, Weezer and The Get Up Kids.

It's no surprise then that among their fans it's easy to find aging parents of young children who long for the sweet nostalgia of their glory days as well as young hipsters who have embraced the aesthetics and charm of melodic guitars and catchy singalongs that wouldn't have been out of place in the '90s.

Onsloow was produced by Marius Ergo (Lukestar, Truls and The Trees, Insomniac Bears), and the album is proceeded by the album's first single, "Overthinking," which was launched to rave reviews in the British music press, a second single, "A Good Day to Forget," which is currently on heavy rotation with NRK-P13, Norway's BBC 6 equivalent. 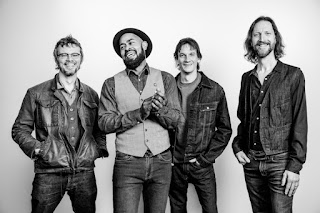 North Mississippi Allstars will release Set Sail on January 28th via New West Records. The 10-song set was produced by Luther and Cody Dickinson and follows their Grammy Award nominated 2019 album Up and Rolling. Set Sail features an appearance by Stax Records legend William Bell on the album standout “Never Want To Be Kissed” (which Bell also co-wrote and co-produced). The album has already been met with critical acclaim with Uncut Magazine stating, "Bloodlines and geography figure into every NMAs album, but on Set Sail, Luther and Cody Dickinson make family and setting the conjoined theme..." in their 8 out 10 Star rated review.

The “Never Want To Be Kissed” video which was shot at William Bell’s recording studio outside of Atlanta, GA.  Luther Dickinson said of working with Bell, “He had the whole plot of the song conceptualized, as if it was a movie. I’ve never seen a song written like that before. Usually, for me, story lines unfold as they are written. We simply helped William turn the plot into lyrics and added music but we were truly only helping William realize his vision. We recorded a voice memo at the session and built the song up from there. Some of the audio on the record is from the original voice memo. It’s an honor to work with a living legend and soul music pioneer.” William Bell said, “Luther and Cody are my kind of people, locked in the tradition of Blues and Soul stories and songs. Pure perfectionists at their craft!” See the Cartter Fontaine-directed “Never Want to Be Kissed” Video HERE.

After 25 years, twelve albums, four Grammy Award nominations, and sold out shows everywhere, North Mississippi Allstars open up their world once again on Set Sail, welcoming other family into the fold. As sons of the legendary producer and musician Jim Dickinson, Luther and Cody Dickinson started the band in 1996 as a loose collective of like-minded second-generation musicians who shared a local repertoire and regional style. Over the years, the lineup has shifted by design, and with Set Sail, they mined the talents of Jesse Williams on bass and Lamar Williams, Jr., the son of Allman Brothers bassist Lamar Williams, Sr, on vocals. During the Allman Betts Band Family Revival, the Dickinsons first linked up with Lamar, becoming fast friends and collaborators, paving the way for Set Sail.

“The chemistry we have with this lineup is powerful,” observes Luther. “We are all second-generation musicians and share a telepathic, relaxed ease about creating and performing. I believe music is a form of communion with our loved ones and conjuring this vibe with members of musical families can be inspirational. Lamar and I are like-minded. I’ve never had the pleasure of working with a singing partner like Lamar. He has a true-blue quality in his musicality that will pull you in and break your heart. At the same time, Jesse grew up playing music with his brothers and his father—as did we. He plays like a sibling. I’m drawn to musical families, regardless of style. Playing with second- or third-generation players allows us an easy unspoken musical dialog. It’s not a big thing; it’s just what we do. We never had to figure out what it means and takes to be a musician. We all inherently know.” He continues, “Each generation has to reinvent itself and shed the skin of the elders. On Set Sail, we feel as if we’ve once again ‘broken the code,’ and know what we want and how to get it.”