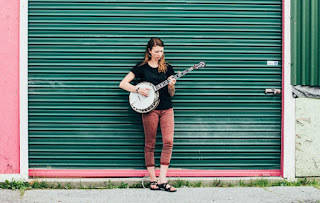 The Gina Furtado Project - It Wont Be Me.

Drawing on the distinctive sound that earned her a third consecutive International Bluegrass Music Association Banjo Player of the Year nomination in 2021, Mountain Home Music Company’s Gina Furtado starts off her 2022 with a new single, “It Won’t Be Me.” Backed by her eponymous Gina Furtado Project, which includes two of her sisters, the singer-songwriter serves up a characteristic blend of engaging music with a powerful lyric theme.

“It Won’t Be Me” mines the rich vein of Latin- and gypsy jazz-flavored sounds that has served Furtado well since her 2017 breakout hit, “Puppet Show” — and as it did there, the deft ensemble playing of sisters Malia (fiddle) and Lu (bass) Furtado, plus guitarist Drew Matulich, is deployed to support a woman’s declaration of independence from mistreatment.

Delivered in Furtado’s immediately recognizable voice, the lyric works its way over minor chords from an opening uncertainty — “I could see the writing on the walls/Sometimes it would fade/And sometimes it was all I saw” — to a dawning recognition (“You broke my heart, my home/And in my broken mirror/A woman said, ‘He’ll never break your spirit’”) before turning to a more optimistic sound that underpins the defiant lines of the chorus:

“This was a touchy song for me,” notes Furtado. “Domestic abuse is so prevalent that we're all bound to know someone who has, and/or is experiencing it. I know I do. It is often so confusing for victims, and so hard to leave a bad situation. I hope that this song might help somebody who just needs to hear an ending that is alternate to what they may currently be feeling they are destined for.” 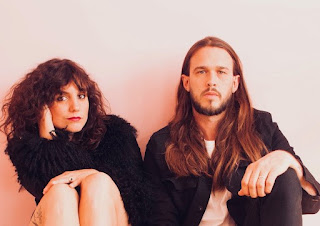 “When I was a Poster Girl in 1984, you tore me from your magazine and pinned me to your wall” lulls Sarah Gotley, seemingly adrift in the bittersweet reflections of another lifetime.

A twisting ballad that touches on the fickle promises of fame, the fight for feminist rights and finding your own way through life, “Poster Girl” is the story of a shining star who’s unafraid to stand her ground. As Blue Violet guitarist Sam Gotley elaborates of the track:

“”Poster Girl” is a song about fighting back. The character it centers around resists objectification, defends herself from evil and keeps whatever company she sees fit – in the chorus she finds herself the leader of a group of drunken sailors that accompany her on her voyage… As the writing process went on we felt that a dystopian, Orwellian setting was perfect for the female protagonist: weary traveller, fighter, lover & saviour all rolled into one.”

With shades of Slowdive or Sigur Ros’ subtly-epic sonic masteries to Mazzy Star’s brittle heartbreakers, “Poster Girl” finds the Anglo-Scottish duo of Sam & Sarah Gotley in perfect synchronicity as they pair lush arrangements to a narrative straight out of Hollywood biopic. “Walk on the Wild Side by Lou Reed definitely worked its way into the fabric of this one” adds Sam, “but we also wanted to give it an anthemic feel. We layered a lot of guitars & synths and have two drum kits playing at the end, giving a feel that the world is kind of collapsing around you.”

Written in 2019 as Blue Violet found themselves well-into the throes of recording sessions for a full album with legendary producer Rob Ellis (PJ Harvey, Bat For Lashes), the track emerged as a standout from a clutch of new demos the band recorded during a particularly prolific creative spell. With pre-production perfected at Peter Gabriel’s Real World Studios, “Poster Girl”’s swelling riff and lyrical narrative soon began to fall into place. With the final version recorded with Ellis, “Poster Girl” was mastered by Mount Olympia Mastering, engineered by Peter Miles and mixed by TJ Allen. 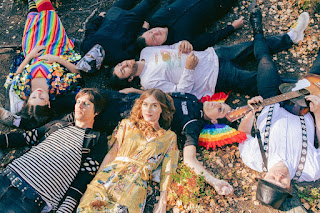 Norwegian art-pop band Team Me release new single "High Street" - the third track to be heard from the their long-awaited third studio album 'Something in the Making', out 11th March 2022 via Propeller Recordings (Sløtface, Highasakite, Lokoy).

Mixed by Grammy-award winning producer/mixer Darrell Thorp (Foo Fighters, Radiohead, Beck) and mastered by Emily Lazar (David Bowie, Björk, Coldplay, Haim) the new album is their first for 7 years, following their critically acclaimed and Norwegian Grammy-winning debut album To the Treetops! (2011) and its follow up Blind as Night (2014).

Psychedelic art-pop anchored by superlative songwriting, "High Street" is another charming taste of what to expect from Team Me's long overdue return to the fore. Led by Norwegian singer/songwriter Marius Drogsås Hagen, Team Me have received widespread international success and attention to date, creating an engrossing alternative pop universe in the process.

New album 'Something in the Making' continues in that vein, a journey which began with the band's surprise reunion in 2019: “When we first announced our reunion, the love and appreciation was just overwhelming to be honest. I was very surprised,” says Hagen. “Still, it was a good move to not rush into anything. It left everyone with hope and motivation for the future.”

It paid off. That compulsion drove Hagen to complete the most accomplished and world-beating collection of songs of his career so far. What makes it even more of a triumph is that this music finds a whole lot of light out of the darkness. 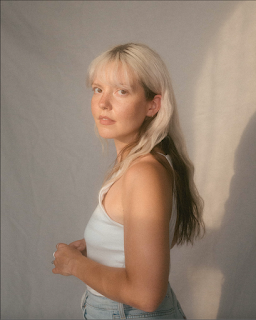 By entwining her acoustic roots with gentle electronic textures, singer-songwriter Cassidy Mann finds her true voice on the upcoming debut EP, If It’s Not Forever. As a lyricist, she often reshapes a small moment into a powerful and poetic song that feels both personal and relatable. What makes these recordings stand out, though, is the way the sonic approach enhances the storyline, allowing her to share her most intimate memories in a singular way.

Co-producing with her friend Roman Clarke, Mann wanted to find a cinematic yet wistful sound to complement these emotionally driven pop songs. They achieved that effect through reverb and delay on the guitars, along with crafting lyrics about specific moments in past relationships.

“My favourite thing is to write about tiny things that make the bigger picture more important somehow,” she says. “I was wondering a lot about how two people can be in the same situation and have different memories attached to those times. It’s interesting to me how memories are interpretable that way.”

Mann notes that these songs also serve as a catalogue of how her early relationships ended and why – and she hopes that other people will feel seen and comforted by her stories. While processing one particular breakup, she remembers sitting on her bed and eating the same sour candy she once shared with the person she missed. When she discovered the metaphor – “this thing that seems sweet, but also physically hurts you if you have too much,” as she describes it — the song “Tropical Sour Candy” emerged.

She wrote “Election Night,” tweaking the melodies with Clarke, to capture the intense awakening and transformation that many people experienced over the four years of the prior presidency. The lyrics focus on a couple that moved beyond just friends that night but ultimately ended as strangers. Her skill as a writer is especially clear on “Fine,” as that simple word takes on multiple meanings in the context of a heartbreak.

Certain moments in a relationship are almost always at the core of her songs, whether it’s the potential start of something special (“Since I Met You”) or the inevitable end (“Stop a Heart”). There’s also an acknowledgement that listeners can carry those important parts of the past through the rest of their lives (“If It’s Not Forever”). “A lot of the time, whenever I’m remembering something, I find myself connected to these subtle moments that made me feel alive in some way. Those are the things that I replay in my mind a lot.”