On 14 October 2022 wildly creative free-form songwriter Rachael Dadd is to release her brand new studio album Kaleidoscope via Memphis Industries. The first taster is ‘Moon Sails’ which comes with a video directed by Narna Hue. Kaleidoscope is Rachael’s second album for Memphis Industries and follows 2019’s Flux, which was released to much acclaim and which she was touring when the pandemic struck.

Like so many people disconnected from their communities and struggling through the lockdowns, Rachael Dadd turned inwards, seeking escape through music and connection through songwriting, and her hope is that when people listen to Kaleidoscope “they will feel held and find space to breathe, grieve and celebrate.”

"Music for me usually comes from a place where I’m in a state of flow and free-child: playful and explorative and sparked by the infinite possibilities that creating it can bring,” she continues, “so kaleidoscope, a toy with infinite possibilities of shape, colour and pattern, seemed like a really good title."

Having been kissed on the cheek and told to pursue music at the age of 14 by Tori Amos, who along with Kate Bush and Joni Mitchell lit up a new universe of possibility and magic for her, showing Rachael a way to translate her own inner world into words and music, she went on to discover John Cage, Steve Reich and John Tavner. Creating avant-garde feedback loop experiments at Alton College also left a big impression on her, as did WARP artists such as Aphex Twin, Boards of Canada, Plaid and Broadcast, and more recently Elsa Hewitt. "I love synth worlds and it's been really great to explore this more deeply on ‘Kaleidoscope'”, says Rachael, who also draws inspiration for the new record from Bristol’s contemporary jazz scene and artists like Ishmael Ensemble and Waldo's Gift. 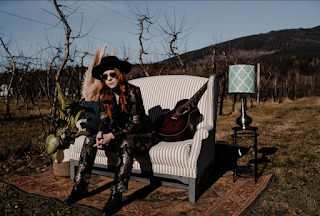 Soul-stirring Americana artist Brittany Collins is a late bloomer who never imagined that her calling would be singing, but once she discovered it, there was no turning back. Raised in the Pacific Northwest, she didn’t step on stage to perform in public until her twenties. Her soulful voice immediately captivated audiences with its intensity and raw energy, turning her into a darling of the Northwest music scene. Collins quickly built up an impressive resume of performances from acoustic coffeehouse shows to summer festival stages before landing spots on more extensive tours throughout California. After releasing two self-produced, self-released EPs, The Hitchhiker EP and Rough Sides, Collins will release her debut album, Things I Tell My Therapist, on August 12th, 2022.

The album’s overarching theme is examining how the people who raise us and the people we encounter in our lives shape how we see the world. Every song on the album is about a specific person; sometimes, that person is Collins. The record was written primarily in late 2020 when she was going through many changes in her personal life that caused her to reflect on her relationships. The process forced her to unpack a lot of trauma. But, the good news is that she ended up healing from it for the very first time. The songs might examine times in her life when she grappled with painful memories and situations, but they are tinged with hopefulness.

“If there is a message I would want someone to take away from the album, it would be “Life is messy, you get hurt, but you get to choose the kind of person you want to be, you get to choose to grow past the hurt and be a source of light for people if you want. It’s never too late to choose to put yourself first,” explains Collins.

This album feels a little bit like Collins’ diary, primarily written during a time when she was just beginning to address and recover from trauma stemming from childhood abuse. It reflects on her own relationships, the people she encountered during her time as a social worker, and stories that compelled her. Starting out as a tongue-in-cheek title for a song she wrote while on a hike in the woods, she soon realized that the title “Things I Tell My Therapist” was painfully and comically accurate.