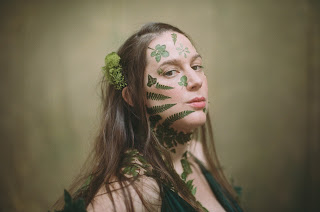 We have two incredible songs today from to highly creative artists! We begin with indie-folk artist Josienne Clarke who has released Now & Then, a surprise ‘extended E.P’ of covers via her own label, Corduroy Punk Records. Now & Then is a diverse collection, with covers of traditional folk songs like ‘Reynardine’ and ‘The Month of January’ sprinkled amongst Josienne’s take on Radiohead’s ‘Nude’ and Sharon Van Etten’s ‘You Shadow’.

Of her new release, Clarke says: "The last few years I've gone through a process of change as an artist and what better way to orient yourself as a singer and a songwriter than through songs and the work of songwriters you deeply admire.

Perhaps this seems like an odd collection of songs to release now and/or to have alongside one another but these are all songs that I’ve been singing live or have secretly held a notion of how I’d interpret them when I gave myself the chance. Each one deeply melancholic in a way that particularly speaks to me, as a singer, songwriter and an admirer of lyricism in songcraft.

The song from which the EEP's title is taken is a rare-ish Sandy Denny demo, as far as I'm aware only a rough early recording of it exists, the song feels almost beautifully unfinished, a rare one of her tunes that never quite got the attention it deserved. It has this poignant and resigned melancholy that I've always been drawn to in her lyrics. Now and then, the present and the past are two different places and states of being. The lyrics seek to reconcile the two and the peace comes from letting them exist apart from one another.”

In addition to covers of songs by artists like Sandy Denny, Radiohead and Sharon Van Etten, listeners of Now and Then will also find a reworked version of Clarke’s own song ‘Undo’, a track which originally featured on 2017’s Such A Sky, a collaborative EP Clarke released with Mercury nominated jazz pianist Kit Downes. “I included a reworking of my own song 'Undo' because in the same way, my own songs have various lives and this song felt timely, during a period of change and upheaval,” she explains.

We continue with the very honest and talented APACALDA who tells us "My self-titled debut EP was fully written and inspired by true events. I chose bold honesty, sharing details about experiences that have maybe hurt me, but also molded and shaped me. It is meant to simulate an inner downward spiral, enchanting the listener to descend into a hauntingly beautiful immersive world that has been meticulously yet authentically curated."

My latest track, "Male Gaze," is deliberate introspection about the unfortunate yet inevitable darker experiences femme/women have endured and tolerated in a world led predominantly by the "Male Gaze." It's about speaking out, the refusal to continue to adapt to what is, and instead confronting the truth with the intention to accept nothing less than change in favour of a safer existence.

Director Maïlis got an instant inspired vision from listening to the first 20 seconds of this song. The depiction of a woman going through some sort of exorcism, releasing all of the residual judgments, the ingrained ideas of the perception of a woman, and confronting the problematic behaviour that has consumed femme/women and their existence for centuries.