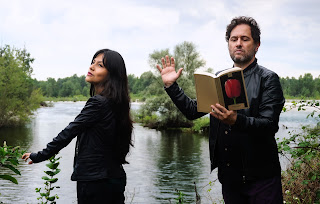 "'Mourning' is the lament of death, a siren that announces its sound, a round murmur, the malevolent reverberation of an end that escapes, that is beyond to come but that does not come: because rather than death what's coming is sleep, apathy, the trap of return, the eternal damnation of the present.

Mourning is inspired by Jean Cocteau's Orphèe 1950, death is a mirror that entraps, eternal return, continuous re-proposition of dream scenarios. A lament, a call and a new lament, as if death were nothing more than a new beginning. "

Regina (voce, pianoforte, synth e organi) and Claudio (voice, chitarre, Lunabass, drum machine / campionatore, synth) have made wide use of analog instruments like MS 20, Solina, acoustic pianos, banjos, analog drum machines and filtered drums, but also samples, pans, streams, empty bottles of Martini, reflecting on the one hand the aim to get warm, deep sounds, on the other hand their taste for sonic research. 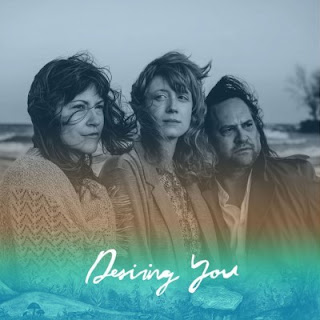 Ace Of Wands - Desiring You.

Some energy, some emotion and a whole load of hooks both rhythmically and vocally, this is one very impressive song. Lee Rose from Ace of Wands asks us - Have you ever wanted to be with someone you knew was no good for you?

“Desiring You” was written while I was staying alone in a cabin in northern Ontario for 2 weeks. It was my first time taking a completely solo trip. Having no one for company but my dog and my instruments, I recorded the demo, staying up late into the night writing and re-writing the lyrics and harmonies, and playing the bridge riff over and over again until it felt like a second skin. I always know when a song is going to become bigger than me when I feel it in my body.

The song was inspired by a toxic relationship and the addictive and sometimes destructive nature of desiring what is not good for me. I was trying to put music to the feeling of being completely un-seen by the person I most desired being with. The song explores the tension, the anger and my ultimate refusal to be strung along.

In an effort to fully understand how things end and why, Now or Never looks to unpack what happens when you stay empathetic through heartbreak. The lyric “kiss me now or never, hold me close or let me go,” is one of the first lines I wrote and it has stayed relevant to my experiences ever since. This line has haunted me for almost a decade and recent experiences of loss and reconstructing of the self helped me to finally transform it into a song.

Hi friends - pleased to be announcing the debut LP of Portugese songwriter Nico Paulo, who has found a second home in St John's Newfoundland and linked up with CA label Forward Music Group. Highly recommended for fans of Laura Veirs, Tim Bernardes, and any people in for a modern take on Tropicalia songwriting. Will have the full LP to share with you asap.