New single ‘In Good Health,’ fronted by Georgie Stott, is a darkly euphoric and pleasantly strange meeting of Siouxsie Sioux and Jona Lewie, with a playfully discombobulating mix of 80s jangly guitar, chirpy keyboard, and moody post-punk. The song was written by Georgie following a stay in hospital due to a mental health crisis, and tackles mental health, drug addiction, and the power of friendship. As Georgie expands:

“I wanted to write a song that encapsulated how important my relationships with my friends and boyfriend were at that time” she explains “…and one that also felt dark like I did at the time. I couldn’t go outside due to anxiety surrounding my health, so I stayed inside for weeks. People would visit and watch films with me or let me tattoo them or make music with me. My community helped me recover.”

The ‘In Good Health’ video taps into the song’s serious subject matter but also the song’s playfulness. It shows Georgie stuck in what its creator Jess Power describes as “An internalised world, imagining a new day and a fresh start. The overly luxurious bedding, super saturated colours and surreal imagery reflect the idea of seeking clarity amongst inner voices that try to deceive you and bring you down.”

These are two fabulous songs and splendid videos so enjoy the creativity as we let Plastic Barricades explain themselves!!

“What happens after we buy everything we’ve ever wanted?” We are lucid about our habits, but we keep falling into the same traps over and over again. “Lucid in the fall”, the new single from London indie rock band Plastic Barricades, is out on the 18th of November. Written during those never-ending lockdowns, this track will be the first introduction to the band’s new studio album “We Stayed Indoors”.

When humankind got locked indoors, so many people went on a two-year shopping spree. This constant race to own “the latest” and “the best in class” led us all into a corner, where addiction roams free and credit card debt obscures daylight. In a world of instant gratification and absolute convenience, breaking those consumerism chains is no easy task. But we have to keep trying, right? There’s no denying: we are all responsible for what’s happening to our planet.

Melancholic and brooding yet hopeful b-side “Tallest Trees” is a juxtaposition to “Lucid in the fall”, where centuries-old and infinitely wise trees observe humanity with curious concern, ready to forgive our sins yet puzzled by our self-destructive tendencies. Both tracks come accompanied by weird and trippy music videos, made with the assistance of cutting-edge artificial intelligence technologies and image-to-text algorithms.

“We Stayed Indoors” will be Plastic Barricades’ third full-length album, taking on the tricky subjects of hope, mental health, doubts, living in the moment, courage, perception change, regrets about the past and worries about the future. 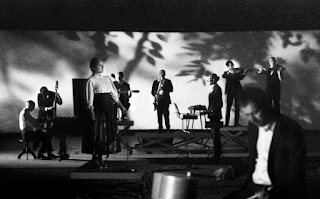 Following their recent standalone single "Right Here",  Emiliana Torrini & The Colorist Orchestra announce the release of their new album Racing The Storm, out March 17th via Bella Union. To accompany the announcement Emiliana Torrini & The Colorist Orchestra have shared a beautifully-shot black and white video for “Mikos”, the album’s atmospheric opening track.

Commenting on the song Emiliana says: “When I am triggered by nice music, I see a movie happening in my mind. When writing that song I saw a girl in a school uniform standing at the edge of a harbor looking into a turquoise sea at the body of a girl. She hears the girl's mother behind her looking for her at the market. She turns to look and then walks away not saying a word about it.”

Picture this: a big storm is brewing overhead. You’re careening through the backroads of rural Iceland, trying desperately to catch your flight out of Reykjavik as the skies darken behind you. You’ve just had one of the best songwriting sessions of your life, in a farmhouse deep in the Icelandic countryside, but none of that matters now. You’ve found yourself in a race against time to get all your work to the next studio and continue working on your album—one that just might turn out to be one of the most important of your entire career.

This exact scenario is what befell Belgian duo The Colorist Orchestra and Icelandic-Italian singer-songwriter Emiliana Torrini during one of the many recording sessions for their new collaborative album—and the experience was so emblematic of the entire awe-inspiring, chaotic, life-affirming process, that they ended up naming the record Racing the Storm.

The Colorist Orchestra knows a thing or two about controlled chaos. Since their inception in 2013, close friends and multi-instrumentalists Aarich Jespers and Kobe Proesmans have taken on the task of reinterpreting other artists’ discographies with their unique blend of pop, electronic and world music. In 2015, they entered into a collaboration with Emiliana, who at that time was already well into her own illustrious career, having released six studio albums, as well as the international hit “Jungle Drum”.

Following My Love Is Right and Ne pas trop rester bleue, Laure Briard shares a third single from her new album to be released in January, leaving behind the blues of melancholy to embrace the azure blue of the sky and the sea in a radiant tropical ballad. But what is this "other planet" to which she addresses the words: "You have conquered my heart / With your wildness / Your joy / Your music"?

We start to get a sense of who she might be talking to right from the beginning of Ciel mer azur which reveals an undulating flute, nonchalant bongos, a smooth walking bass line, a woozy organ and playful guitar riffs. For those familiar with Briard’s discography, the doubt quickly fades. This is the musician who recorded Eu Voo in 2021, an EP of songs written in Portuguese inspired by bossa nova, samba and tropicalismo, and she is singing about the home of Astrud Gilberto, Vinícius de Moraes and Tom Zé.

"It's a love letter to Brazil," confirms Briard, “written during our last tour there in 2019. I really wrote it on the road, between Rio de Janeiro and a village called Vitória, in the tour bus. At one point in the song I mention a gas station, that's how spontaneous it was. It reflects my emotions during this trip. Seeing all the people, the landscapes, both inland and on the seaside, had quite the impact on me. The Brazilian nature is wild and the social life is difficult in many ways, and at the same time, it is such a warm country in terms of the climate, the music, and the people, who are always so joyful, optimistic, and attentive, even if they don't know your music, or don’t speak the same language as you..."

The warmth, the kindness, and the light that Brazil and Brazilians emanate—this is what Briard and her faithful collaborator Vincent Guyot, composer and arranger of this soft and radiant ode to the country of Joyce and João Gilberto, wanted to express. The accompanying music video, directed by Jade de Brito, portrays the sky, the sun, and the sea in vintage film grain split-screens straight out of a '70s film by Brian de Palma or Norman Jewison, with an added flavor of sugary pop. Somewhere between The Thomas Crown Affair, OSS 117 : Rio ne répond plus and a luscious Deee-Lite music video lies Briard’s calm expression, illuminated by swirling lights and a sunny halo, set on a background of moving palm trees and waves,   invoking a rhythm of joyful memories. Fly with Laure Briard to Brazil: to the sky, the sea, and the azure that will never grow dull.